By Tony Ware
The Yeah Yeah Yeahs, with Blood on the Wall and This Moment in Black History Agora Theatre Wednesday, April 12 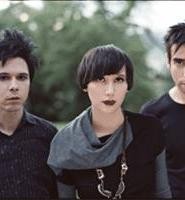 Just repeating a word doesn't make it redundant. Take the name of the Brooklyn-born, now bicoastal trio the Yeah Yeah Yeahs. It can be the same syllable in succession, or it can be Yeah? Yeah. Yeah! Your choice.

"[The Yeah Yeah Yeahs] definitely started as a question with the aim of arriving at an exclamation," admits guitarist Nick Zinner (pictured, left). "Sometimes I feel like we've arrived, and it's a celebration of that, and other times I wonder if we're there yet. But it's not just about beginning and end; I feel the process is a huge part. In the process of this record, there was a deeper foraging."

Indeed, the Yeah Yeah Yeahs' second full-length, Show Your Bones, comes across as a nomadic album looking for a second home. Unlike the group's recorded output from 2001-'03 -- songs such as "Bang," "Our Time," and "Maps," which bowed up more often as either dares or piercing stares -- Show Your Bones dresses up for company while trying to maintain the band's sartorial flair. It wants to be many things to many people, without leaving behind the many things the Yeah Yeah Yeahs have already been. And because of that, there's an unmistakable unfocused quality about it. But it's still one to leave on repeat, whether you immediately get it or not; within its songs is a striving to create something you can feel.

Zinner charts their progress with a visceral analogy: "If you say earlier material was about fucking the songs, there's a little more pillow talk with songs now," he says, "and maybe more foreplay. And not so much shame." Perhaps not so much shame, but certainly insecurity. It's not just a fuck anymore, and now there's the matter of performance anxiety.

Show Your Bones certainly showcases some of the Yeah Yeah Yeahs' trademarks. Singer Karen O does Siouxsie Sioux askew in a kindercore-gone-haute-couture spasm of distressed fashion. Drummer Brian Chase is mussy without being fussy. And Zinner's babble-smeared guitar, a stand-in for Psychocandy-era Jesus and Mary Chain, doesn't so much celebrate tone as exploit it. But these elements come across more measured than on past releases.

For production help, they turned to Squeak E. Clean, the younger brother of skate photographer/ video director Spike Jonze. Zinner confesses an admiration for skateboarding. "I feel like the last person to take to the scene," he says, "but to a certain degree, I think skateboarding is totally rad. They think about persistence and flow and creating dynamics of force, which are all important things. And, of course, balance."

He could just as well be talking about the Yeah Yeah Yeahs' own trajectory. Bones creaks as though haunted by the band's past -- increasingly rarer bursts of catharsis struggling against the moldy cloak of hype, as well as the echoes of melodic ancestors. Just as "Our Time," from the group's debut EP, nicked a swatch from "Crimson & Clover," "Dudley" recalls "Hush, Little Baby," while the strummy single "Gold Lion" bites Love & Rockets' "No New Tale to Tell."

There's a tone to songs such as "Cheated Hearts," "Turn Into," "Way Out," and "Warrior" that feels like a peek in on a relationship that is both bitter and sweet. They are songs so tightly wound, there's barely a breath of space, leaving little room to rush the threshold of your imagination. Even in the moments that erupt with bone-shaking intensity, there's often a contrasting tone that's hollow and harrowing; like an emptiness that speaks volumes, unrest is as often silent as it is shrill.

"Isolation can be inspiring, because you realize how small you really are," says Zinner, noting the video they shot in the desert and the early sessions they recorded in L.A. Like the difference between the hand jive and shaking hands with yourself, Show Your Bones captures the Yeah Yeah Yeahs between confrontation and confessional. Feeling the heat of the klieg lights, they've produced an album caught between questioning and answering, and are anxious where it all might lead. Call it the Yeah? Yeah. Yeahs!' middle period.