Cleveland is My Paris: Coquette Patisserie to Open Retail Shop in University Circle 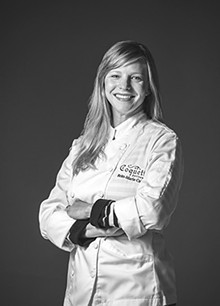 Fans of true French pastry have come to know and love Britt-Marie Culey for her picture-perfect mousse cakes, opera bars, financiers, éclairs and macarons, which she has been selling for years at the Coquette Patisserie stand at the Shaker farmers market.

In addition to the weekly markets, Culey has cultivated flourishing wholesale restaurant and catering accounts, not to mention special order items like meticulously decorated wedding cakes. In fact, Coquette Patisserie is doing so well that it has officially outgrown its home-based bakeshop in Cleveland Heights.

For weeks, Culey has hinted at her company's next move, a patisserie café with an expanded commercial kitchen, retail display cases and seating for customers to enjoy a pastry along with a glass of Champagne.

For the first time, Culey is ready to spill the beans. By mid November, Coquette Patisserie will open at 11607 Euclid Ave., across the street from the Cleveland Institute of Art. The intimate 1,000-square-foot space—much of which is dedicated to the kitchen—will feature fully stocked display cases for quick and easy shopping, seating for 25 in a small dining room, and an adjoining patio.

"This is a totally new concept for Cleveland," says co-owner Shane Culey. "Nobody is doing such an extensive line of real French pastry."

Culey says that he and his wife have been on the hunt for a bricks-and-mortar location since they formed the company five years ago. They've always been attracted to University Circle, but that location has managed to grow even more attractive as a venue over the past few years.

"Being near Severance Hall, Cleveland Museum of Art and MOCA is a dream, and we feel as though our product and concept will play well with the folks who patronize those institutions," says Culey. He adds that the universities and hospitals in the area offer a wealth of potential business in the form of enthusiastic and creative residents and visitors.

Currently in build-out, the space will highlight architectural features of the 100-year-old building, most notably beefy concrete support columns and an open ceiling. Wood salvaged from old barns will warm up the space, while marble and slate will dress up the counters and bar. Fully stocked pastry cases will make grabbing a pear rosemary tart or a dozen colorful macarons a breeze.

While loyal Coquette Patisserie fans have come to love Britt's sweet confections, the expanded footprint will allow her to greatly extend her range.

"In addition to our traditional sweet treats, we're excited to be adding a small savory plates menu, as well as offering beer and wine pairings to complement all of our menu items," she says, adding that they aim to offer one the largest selections of French grower Champagnes in the area.

The Culeys add that the location in University Circle makes Coquette Patisserie ideal for grabbing a small plate and glass of wine before an event, or an after-dinner drink and a pastry when you're not yet ready to go home.

Despite the move, Britt assures her faithful Saturday market customers that Coquette Patisserie will remain a fixture at the North Union Farmers Market at Shaker Square.

"The Shaker Square market customers have been amazing to us, so we want to continue to serve them there," she says. "We feel so fortunate that the city of Cleveland has embraced us to the point that we are able to expand."

Jump to comments (1)
« Here's What's Fresh (and Seasonal) at Bac Asian American Bistro   |   America Loves Cleveland: The Accolades Cleveland Chefs and Restaurants Have Gathered in the Past Year »