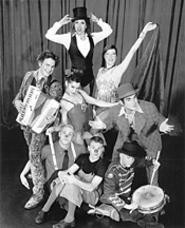 Led by Ringmistress Philomena Bindlestiff, the troupe performed the show for seven months on New York City's 42nd Street, wowing even critics who had been cynical about its extended run. Now High Heels & Red Noses is on the road for the Bindlestiffs' spring tour of the eastern U.S., a stretch that lands the group at the Beachland on Thursday. That's where audiences can grimace at the sight of Mr. Pennygraff, who swallows a succession of swords, sabers, scissors, and neon glass tubes, then bows and announces: "A hundred-thousand-dollar liberal arts education, and this is what I do for a living."

Toward the end of the show, Philomena struts to the front of the stage, coaxing audience members into a gospel-revival frenzy. They could have stayed home to watch TV, she says. "Instead you came here, and in the 21st century, I tell you that this is truly a miracle! So let me hear you say 'Hallelujah!' Get up on your feet and shout 'Hallelujah!'" Amen, sister. The Bindlestiff Family Cirkus performs High Heels & Red Noses at 8:30 p.m. Thursday at the Beachland Ballroom, 15711 Waterloo Road. Tickets are $10 if you're dressed or made-up as a clown and $12 if you're not. Call 216-383-1124 for more information. -- Cris Glaser

It's easy to dismiss the work of Cher: She's a showbiz caricature who can't really sing. But she's also got longevity. Her recent TV special pulled in more viewers than similar in-concert shows from Celine Dion and Faith Hill, and The Very Best of Cher -- a career-spanning set that expertly gathers both her Sonny-era tunes and her recent gay-friendly material -- debuted in the top 10 last month. She swears that her current tour will be her last (all divas have farewell tours). Cher's at Gund Arena (100 Gateway Plaza) at 7:30 tonight. Tickets are $34.75 to $79.75; call 216-241-5555. -- Michael Gallucci

In the Mood?
Calla could be your band.

New York rockers Calla make music that's all about the rattle and hum. On its latest album, Televise, the trio slinks through songs that are alternately jagged and dejected. The music -- at times lo-fi spooky, at other times neo-goth extravagant -- is hardly rousing, but it is intensely atmospheric. And singer Aurelio Valle appears to always be waking from a nap or recovering from one hell of a night before. For its current tour, Calla picks up an additional member to flesh out the dense sound that rolls through Televise. It's both seductive and remote -- you get out of it what you're willing to invest in its varying moods. Calla, with openers Sleepykid and the All Golden, is at the Grog Shop (1765 Coventry Road in Cleveland Heights) Thursday at 9 p.m. Tickets are $8, available by calling 216-241-5555. -- Michael Gallucci

Know It All
Public radio gets personal.

Whad'Ya Know? is more than just a quizzical radio news show. It's "a throwback to the quiz shows of yesteryear," says host and creator Michael Feldman, "with the modern innovation of a phone-in component. And it's really audience-friendly. They never lose." The popular public radio program, which airs locally on WCPN and WKSU, is in Akron Saturday, broadcasting live with its panel of regulars (including announcer Jim Packard and the Whad'Ya Know? Band), along with local guests, including veteran rockers the Numbers Band. "We're trying to make it as rock and roll as possible," Feldman says. Seating begins at 10:30 for the 11 a.m. show (no one will be seated after 10:45). It takes place at the Akron Civic Theatre, 182 South Main Street in Akron. Tickets are $25 and $35, available by calling 330-253-2488. -- Michael Gallucci

Tri-C's Contemporary Visions Series concludes its season tonight with a performance by Indian music virtuoso Shafaatullah Khan, who traces his lineage back to the 16th century, when one of his ancestors was a singer in the Mogul court of King Akbar. Apparently, the sovereign kept him around because he could cure sickness through his music. Khan is part of the family tradition: He swears that his sitar- and tabla-heavy music can elevate moods and heal the sick (guru Deepak Chopra even produced one of his records). Khan is at the Performing Arts Center at Tri-C East (4250 Richmond Road in Highland Hills) at 8 p.m. Tickets are $20, available by calling 216-241-6000. -- Michael Gallucci