BugFest is your chance to celebrate critters, then try them on a cracker. 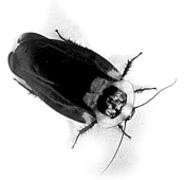 Gene White's recipes are not for the squeamish. And you probably won't see him on the Food Network anytime soon. That's mainly because his signature dishes are chocolate chirp cookies and yellow mealworm cake.

White will serve up his treats at the Cleveland Metroparks' BugFest, a two-day celebration that also includes bug bingo, a bug hunt, beekeeping demonstrations, and other nongastronomic insect happenings.

When he's not in the kitchen, White is an entomologist for a Michigan-based pest-management company. The Akron native points out that bugs are packed with protein, contain no cholesterol, and are shunned as food only in the Western Hemisphere. "There are a number of chefs who have incorporated insect cuisine into their menus," he insists. Military personnel, he adds, are taught to devour insects in survivalist training.

BugFestgoers, unlike stranded soldiers, are invited to feast on White's chocolate chirp cookies (with real bits o' cricket), mealworm gelatin, bugaboo brownies, and Paleozoic picante sauce. He admits that there are some boundaries to practical bug cuisine. For one, he doesn't recommend plucking and scarfing just any creepy crawler. "Eating raw insects is always a danger," he says. "It's like eating raw fish. We work to make sure everything's prepared properly."

Another reason Emeril doesn't bother with insects might have to do with the tedium involved in prepping. The BugFest menu, he says, takes almost three days to get ready. To dry-roast crickets, for example, one must first remove the legs, setae (tiny hairs), and egg tubes -- all of which could upset a person's gastrointestinal tract.

"I use the freezing method," White explains. "I freeze the crickets solid and shake them inside of a box." Once the undesirables are stripped away, "they're ready for toasting."

And what is White's favorite ingredient? "I have a tendency to gravitate toward wax moth larva," he says. "I like them in a Thai sauce." Mmm . . . Bon appétit!