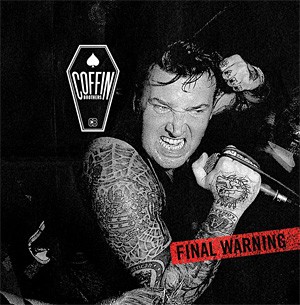 On the Coffin Brothers' debut EP, frontman Trevor Moment — who's also a member of American Werewolves — channels doo-wop king Dion and jettisons the considerable subtlety of his other group. The Werewolves' mix of hardcore and '50s pop is much the same as in Moment's new band, but faster — like they're trying to grab one more bloody meal before the sun rises. The Brothers include Integrity drummer Nate Jochum and half of Youngstown's Crowd Deterrent, all of whom hit escalating notes featuring whoa-oh backing vocals, while Moment digs deep into the horrorcore aesthetic. In "Coffin Brothers," the harmonizing ghouls find existential weight under six feet of the genre's superficial imagery: "Just because you're dead/Don't mean that you're gone/There's a place for you inside my heart." The Coffin Brothers own the night, but they can own your summer too.