The Man in Black tops our pop-culture picks of the week. 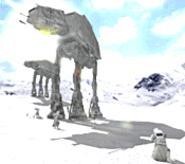 TV -- Making Of: Walk the Line: This behind-the-scenes peek at the upcoming Johnny Cash biopic features reflections by Joaquin Phoenix (who stars as the Man in Black) and Reese Witherspoon (as wife June Carter). The special -- airing at 10:30 p.m. Friday on CMT -- also takes a look at the country-music legend's made-for-the-movies life -- from his childhood on an Arkansas cotton farm to, well, being the subject of a Hollywood biopic starring Joaquin Phoenix and Reese Witherspoon.

COMIC -- Batman: Gotham County Line: The Dark Knight hits the suburbs in this three-issue miniseries written by fan fave Steve Niles (30 Days of Night). A succession of gruesome murders in Gotham's outer edges leads the Caped Crusader into an area that he's totally unfamiliar with. Sorta like how Batman Begins' Katie Holmes is totally unfamiliar with good acting.

VIDEOGAME -- Star Wars Battlefront II: The sequel to one of the best Star Wars games features scenes and environments from all six films. Even more impressive is Battlefront's scope: Just about every starship, vehicle, and character from the saga shows up (including a special appearance by Darth Vader's badass 501st Legion Stormtroopers). There's even a visit with Princess Leia -- who, unfortunately, does not sport that fetching metal bikini from Return of the Jedi.

CD -- 12 Songs: Don't laugh. Neil Diamond's new CD totally rocks. Well, it doesn't exactly rock, but with producer Rick Rubin -- the guy responsible for resurrecting Johnny Cash's career -- behind the boards, this relatively stripped-down outing from the usually bombastic Diamond returns the once-respected singer-songwriter to more reserved and revered ground. It's indisputably his best work in more than 30 years. But that doesn't mean we forgive him for "Forever in Blue Jeans."

BOOK -- Yoga for Regular Guys: Former WWE wild man Diamond Dallas Page turned to yoga after a severe injury in 1998. Yes, yoga. The guy who used to finish off opponents with the neck-snapping Diamond Cutter maneuver now takes to a different kind of mat. But true to its title, this how-to guide won't have you eating granola and talking in a faux British accent like Madonna. It's more of a workout book -- filled with splashes of humor and pics of "Yoga-Babes" -- for folks who don't like to work out. And none of the moves involve breaking a chair over the head of the person next to you.

COURTESY FLUSH, PLEASE -- Festivus: The Holiday for the Rest of Us: We're as big a fan of Seinfeld as anyone, but this one-joke book -- based on the fake holiday created by Frank Costanza -- strips away the humor from something that wasn't all that funny in the first place. (Frank Costanza himself, Jerry Stiller, pens the forward.) Included are nondenominational celebration tips, recipes, and songs. And to prove that a phony holiday can be just as dreary as the real thing, there's an entire section about religious free speech. Ho-ho-no.