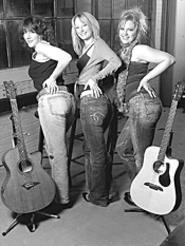 The Linguistic Society of America recently announced its "Words of the Year," an annual tribute to the fresh coinages that have wormed their way into our language. And once again, amid all the dazzlingly creative new terms -- "hillbilly armor," "carb-friendly," and "crunk," among them -- a response to the crying need for a new spin on the concept of "dinner theater" didn't emerge. And this is a crime since, as anyone who has ever eaten dinner or attended the theater can attest, "dinner theater" is a different beast entirely, one fully entitled to a more definitive descriptor.

There's no logical reason why dinner theater ("eat 'n' clap"?) should be less edifying simply because the two activities happen sequentially in the same space. Nevertheless, dinner theater ("ingestarama"?) has come to mean an ill-conceived meal, followed by a half-baked stage performance. For many years, the fine folks at Carousel Dinner Theatre in Akron have been trying to defy that conventional wisdom, blending these two elements to the delight of loyal followers. They're at it again with The Honky Tonk Angels, a rather carelessly assembled work featuring three women crooning a selection of country-western favorites by Tammy Wynette, Loretta Lynn, Lee Hazlewood, and others. And while there are occasional bright spots, the overall effect might cause dinner-theater digestive upset ("gastroentertainus"?).

Created by Ted Swindley, this virtually plotless musical focuses on a trio of down-on-their-luck southern damsels, who meet on a transcontinental bus and decide to take the Nashville music scene by storm. We are introduced to each of the women individually: Trailer-park momma Angela, who's married to a truck-drivin' guy named (get this) Bubba; sweet young Darlene, who's trying to pick up her life after her beau, Billie Joe MacAllister, jumped off the Tallahatchie Bridge (coincidentally, there is a song to that effect); and career-gal Sue Ellen, who's tired of fighting off her boss's sexual advances (yep, she sings "9 to 5"). In a trice, the girls' careers leap from their shared vision on a Greyhound to a polished appearance, in full Dolly Parton drag, on stage at the Hillbilly Heaven nightclub. By neatly leapfrogging the women's struggle to succeed in that cutthroat town -- a theme achingly omnipresent in much country music -- the author betrays the idiom while eliminating many possible character insights.

After the intermission, during which audience members gorge on gargantuan, luscious-looking servings of gourmet banana-caramel fried cheesecake, any pretense of a story is dropped and the show just turns into an off-night at the Grand Ole Opry. Among the three game New York performers, Elizabeth Stanley (pictured right) as Darlene has the best voice, and her evocative second-act rendition of Bobbie Gentry's "Fancy" is as close to a heart-stopper -- other than the cheesecake -- as there is. Barbara Helms (center), portraying the sexually harassed Sue Ellen, twangs her songs appropriately and has deft comic timing. But Trudi Posey (left) layers too much nasal edge and leg-splaying oafishness onto Angela, turning a possibly endearing good old gal into a minor irritant. When they perform as a trio, though, the results are often pleasant -- especially in the fragile and almost ethereal "Sittin' on the Front Porch Swing."

One of the difficulties of casting Broadway-savvy women in these roles is that the raw, "been there, done that" edge of real country music is somewhat lost in their smooth, melodically precise interpretations. Perhaps if there were additional opportunities for character development, the intense emotions that reside in most country tunes could have flowed more easily.

Of course, even a musical with a book this flimsy can be fun, if staged with verve and respect for the material. That's why either the author or director Gary John La Rosa should be skull-whipped with Merle Haggard's mother-of-pearl-inlaid pool cue for performing too many classics tongue-in-cheek. The indelible "Stand by Your Man" is turned into nothing more than an extended punch line for Angela, and "Coal Miner's Daughter" is simply used as exposition for Darlene, with little emotional setup. The director also allows stretches of stage time to pass with little or no action -- especially during the interminable bus scene. And La Rosa doesn't exactly tax his comedic inventiveness in the one-joke song "Cleopatra, Queen of Denial" by costuming the gals in, um, Cleopatra outfits.

The one undeniably positive aspect of dinner theater ("graze-and-gape"?) is that people are exposed to actual live performances. Perhaps, after that cheesecake has fought its way through their lower digestive tract, Carousel patrons will find their appetites whetted for even more delectable theatrical fare.