Straight release is over, but metro jails are paying for its legacy. 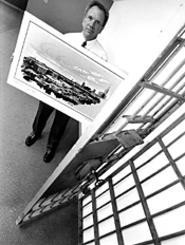 At 9:55 on a Monday night, a cleaning woman found Susan Locke unconscious and bleeding from the head. It wasn't hard to piece together what had happened: Someone sneaked past security in the Bond Court Building on East Ninth Street, went to the 18th floor where Locke was working late, and repeatedly bashed her with a baseball bat. She died two days later.

It was June 1999, and Locke's murder terrified women who worked downtown. They began to leave their offices in bunches, clutching pepper spray. Police had no suspects and knew of no motive for the attack.

Then a man named Victor Washington, in jail for burglary, claimed to know who killed Locke. He fingered a man named Gene Turner, but Turner's handwriting didn't match that of the killer, who signed into the building under the alias Micheal Jones. Suspicious, police turned their scrutiny to Washington and discovered he once signed himself out of jail under that name. A handwriting analysis confirmed police had their man.

Washington died of cardiac arrest before he could be tried, but he wasn't forgotten. Judge Timothy McGinty used the case as Exhibit A in his critique of straight release, a long-standing policy under which police let suspects go without charging them so they can avoid housing prisoners who await bond hearings or couldn't make bail. The suspects would be charged later, but in the meantime, jail overcrowding was eased. Washington had been straight-released twice in the two months prior to Locke's murder.

Washington became the Willie Horton of straight release. The Plain Dealer put the issue on its front page. City Council President Michael Polensek called the policy a fiasco and vowed to stop it. To further prod Mayor Michael White into action, council set aside more than $1 million to end the practice, the bulk of the money to be spent on reopening a wing of the city workhouse to hold additional prisoners.

After weeks of outcry, the city abruptly ended straight release in June 2001. But in his typically intransigent fashion, White didn't make use of the money council set aside to ease the burden, says Polensek. It was almost done out of spite, to create a problem with the county. (Della Homenik, the former mayor's spokeswoman, said he was unavailable for comment.)

The results were predictable. Each month after straight release ended, the county jail took in 60 more inmates than it was used to receiving. For two weeks in November, the jail population swelled to a high of 2,350, though its capacity is just 1,750. By Thanksgiving, it looked like a flophouse. There were 600 people using mattresses on the floor, says Director Ken Kochevar. We had corrections officers doing their rounds and having to step over people.

On December 10, county officials closed the jail to misdemeanor offenders -- guys caught driving drunk or peeing in public. The move slackened overcrowding, but at the expense of smaller suburban jails, which now had to house their own misdemeanor bad guys instead of sending them to the county. Because they lack medical and recreational facilities, those jails aren't supposed to hold inmates longer than five days. Some suburban jailers turned to creative accounting. In Independence, criminals sentenced to 10 days might split their time between two five-day facilities. Other jails say they've considered using the same strategy. It violates the intent of the state's minimum jail standards, says Scott Blough, chief of the Bureau of Adult Detention. But, he adds, We realize this is a difficult time.

A prisoner with a longer sentence poses a different challenge. Small jails must scramble to find full-service facilities with open space. They're all competing against each other for limited beds, creating a situation akin to making last-minute dinner reservations on Valentine's Day. Says Leonard Piazza of the Shaker Heights jail: I call the first jail and they say, "No, we're full,' and I call the second jail and they say, "No, we're full.'

Jailers aren't prone to panicking, but they wince when asked what will happen if the county continues to turn away misdemeanor offenders. Says Sergeant Todd Kinley of the University Heights Police Department: It's just a question of, when's the balloon going to burst? When are the full-service jails not going to be able to accept any more, because they're saturated?

One solution would be to build a new jail -- an idea that has been kicked around for years, but stymied by competing political interests. Sheriff Gerald McFaul feels closing the jail to misdemeanor offenders adds urgency to the discussion. We're raising a red flag, he says.

Jail Director Kochevar agrees. We don't have a minimum security jail, and that's a crime in itself.

But it would take at least 18 months to build a new jail, even if construction were approved tomorrow, and there's little chance that will happen. For one, officials are still bickering over where to put it. For another, the county hasn't decided whether it's even needed. County Administrator Dave Reines says commissioners will make a decision this year.

A more ready solution might be to increase courtroom efficiency. More than two-thirds of the jail's inmates are simply marking time while they await trial or sentencing. Judge McGinty, who captained the move to end straight release, says more needs to be done to hold judges' feet to the flames and move cases through the system faster. We don't need a new jail. We need an efficiently run jail.

Now Patmon's getting his wish. In the meantime, the county must reimburse suburban jails the cost of housing misdemeanor offenders. Kochevar predicts the added expense could exceed $3 million by year's end.