The former John Palmer's lightens up as Johnny D's. 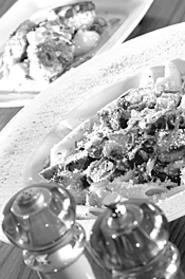 Walter Novak
Pasta and . . . crab cakes? At Johnny D's, yes indeed.
As in most any business, savvy restaurateurs must constantly reinvent themselves to meet the needs of their clientele. It's a chore that can be a little like trying to cross the Cuyahoga on a guitar string. Give customers filet mignon when they want burgers, and you've blown it. Give them down-home when they want upscale, and you're out. Set prices too high, and they'll run for the door; set 'em too low, and you'll run into debt.

So we appreciate the balancing act in which John and Michelle DeJoy have lately been engaged. After five years of running their contemporary, upscale John Palmer's restaurant in a little strip plaza just off Chardon's historic square, the duo concluded that a less ambitious, more family-friendly spot might be more to customers' liking. In March, they bade adieu to the old J.P.'s and launched the more casual, less expensive Johnny D's Italian Kitchen & Bar in its place.

Turns out that wasn't quite the answer either. So in mid-July, Executive Chef John DeJoy again revamped his kitchen staff, reworked his menu, and took a few steps back from the "casual" designation. Among other telling changes, he eliminated the children's menu (though he still accommodates childish palates, on request), returned some old John Palmer favorites to his repertoire, and let prices on nightly specials creep up a few bucks.

One of the odd results of all this tinkering has been to position the restaurant in a sort of Twilight Zone: potentially too pricey for routine family dining, yet still too casual to qualify as a destination. Or, in layman's terms, you can get a $24.95 strip steak here, but if you want a glass of nice Napa Valley Cab to go with it, you're out of luck. (To be fair, the small, value-oriented wine list does offer the critically endorsed Amber Hill California Cab, a blend of grapes from several growing regions. It goes for $12.99 a bottle in stores; it's $28 at Johnny D's.)

Regardless of how you pigeonhole the restaurant, though, Chef DeJoy (a Culinary Institute of America grad and veteran of the Italian-chic kitchens at Johnny's Bar and Johnny's Downtown) continues to uphold high standards, making almost everything from scratch -- including soups, sauces, and the rustic, individual-sized pizzas -- while emphasizing seasonal ingredients and fresh, clean flavors.

Nor has he limited himself to a steady output of spaghetti and meatballs, the "Italian Kitchen" designation notwithstanding. Yes, there is pasta primavera and eggplant Parmesan, but DeJoy's large dinner menu frequently veers off the beaten path with dishes like top-round steak braciola, a lush Kobe beef burger topped with pancetta and gorgonzola, and sautéed lump crab cakes with chipotle mayo and jicama slaw -- a John Palmer's favorite DeJoy brought back by popular demand. Daily specials, too, provide an opportunity to turn out up-to-date entrées like wild striped bass, seared to perfection and served on creamy, artichoke-studded risotto.

Black ceilings, trendy little halogen pendant lamps, a rustic stone floor, and walls painted in warm earth tones help carry through a handsome Wine Country vibe that belies the moderate prices. The result is a particularly well-appointed dining room that is as comfortable for families with well-behaved children as it is for after-work singles, who can be seen grabbing a seat at the V-shaped bar and unwinding with a martini and a bowl of steamed mussels and clams.

Still, there are a few reminders -- besides the wine list, of course -- that this isn't an urbane salon. One of them is service, which on three visits ranged from blissfully absent-minded to unpolished. Take our Thursday-night waitress, who forgot to serve our wine, bring our bread, offer grated Parmesan for our pasta, and refill our iced-tea glasses, among other neglects. Or a youthful Saturday-night waitress, who first quizzed us to be sure we really knew what risotto was and later delivered an impromptu lecture on the provenance of Kobe beef.

On the other hand, when you can score something as inspired as DeJoy's chunky, smoky, chipotle-zapped gazpacho, as delightful as his gourmet Classico pizza (the thin, yielding crust supporting a blanket of marinara and melted mozzarella; add Asiago and ricotta for a dizzying dairy overload), or as pristine as his freshly picked zucchini blossoms (battered, fried, and served in a shallow pool of ebullient lemon-parsley butter) -- well, who needs the drive into downtown Cleveland anyway?

Fish and seafood are good bets too. That perfectly seared striped bass (one evening's special) was particularly memorable for its sweet flesh and caramel-like overtones; factor in the silken artichoke risotto and satiny tomato-lobster sauce, and the result may very well be the final word in summery gastronomic luxe.

DeJoy's kitchen also turns out an exceptionally tender version of breaded, flash-fried calamari. Greaseless, but still custardy-rich, both the rings and tentacles seemed hardly more substantial than butter. And if an accompanying swish of minced-parsley and lemon-zest gremolata lacked the expected amount of citric brightness, at least it was a creative change of pace from the usual tomato-based sauces.

Not that Johnny D's fresh-tasting marinara couldn't have stood up to the challenge: A softly nuanced yin-yang of sweet and tart, the sauce added depth to the gourmet pizza as well as much-needed moisture to the very dry but well-seasoned beef braciola.

As were all the entrées, that braciola -- rubbed with basil pesto, layered with thin sheets of prosciutto and Asiago, and slowly simmered in the marinara -- was a full-meal deal, accompanied by bread and dipping oil, a small mozzarella-topped salad, and a generously sized tangle of linguine.

A new menu addition -- three-layer lasagna -- turned out to be a solidly prepared standard. (It replaces a four-layer version, designed by a former employee.) Firm noodles separated by thick strata of ricotta, mozzarella, and lean, tender ground beef formed its core. More shredded mozz and an ample shake of grated Parmesan added a final trill of richness and nutty flavor. A behemoth, half-pound Kobe beef burger (the "Sicilian Burger") sang too, with beefiness profundo, joined by a tasty chorus of pancetta, gorgonzola, and sliced red onion.

Homemade sweet endings range from cannoli to spumoni, gelato, and biscotti, which would probably pair well with a cup of the restaurant's good espresso or cappuccino. However, neither the rubbery, bland panna cotta nor the firm, slightly dry tiramisu was delicious enough to justify the caloric splurge.

Still, occasional blips to the side, Johnny D's is shaping up to be a very good, casually upscale eatery. It is so pleasant, in fact, that, like us, you may find yourself wishing it had a few more gracious touches, like more professional servers, a more diverse wine list, and preparations that consistently score above average. But in that case, those moderate prices might have to be adjusted; as it is now, the price points -- and most of the kitchen's output -- are just about right.

In other words, for a neighborhood restaurant, Johnny D's is a find.