The Dirtbombs step out of the garage, make an album about their city. 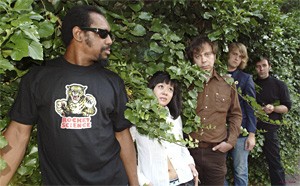 Detroit's Dirtbombs load their songs with a little bit of everything — from glam to soul. Mick Collins, who's fronted the genre-defying rockers for the past 15 years, shrugs it off: "Detroit has pretty much always done everything by its own rules."

No shit. The Dirtbombs boast not only two drummers, but two bass players. Meanwhile, Collins howls over top of it all with an unmistakable precision that's rooted in the Motor City's fabled assembly lines. It's also part of the city's rock and roll tradition, says Collins. "When Detroit was a car town, it was like, 'As long as you stamp that fender out for eight hours, whatever you do on your own time is yours.' Back in the '60s, that meant music. So everybody was cutting records. Now everybody's an artist, but it's the same thing. There's nothing else to do here. You just get bored and start throwing paint on walls. And we've got a lot of walls to throw paint on in Detroit."

Collins has definitely thrown his fair share of paint over the years — starting during his teenage years, when he was a member of punk bands like the U-Boats and the Floor Tasters. Since then, he's played in the Screws, the King Sound Quartet, Man Ray Man Ray, Blacktop, and the Gories, whose deconstructionalist R&B laid the groundwork for Detroit's garage-rock revolution.

The Dirtbombs stand as Collins' longest-running and most prolific project. Their fourth album, We Have You Surrounded, comes out in February. "I always thought, rather than keep changing a band's style, why not just do a different band?" he says. "I figured I'd just make a bunch of different records for different audiences, and they'd be OK with it. I didn't realize it didn't work that way. So by the time the Dirtbombs happened, all my existing fans were angry that it didn't sound like the Gories."

Some of them have come around. Jack White even christened Collins the godfather of Detroit garage — though Collins is quick to point out that most natives still hold a grudge against the Dirtbombs. "The ultimate irony of all this is that before the Gories, I was making electronic music," he laughs. "The Gories were something to tide me over until I finally got a house 12-inch out. But when I couldn't get anybody to put out the house music I was making, the Gories record came out, and I said, 'OK, I guess I'm doing this for a while.'"

Apocalyptic enough to be scorned when they were together, yet worshiped after they broke up, the Gories released three albums before calling it quits in the early '90s. With no 12-inch mixes on the horizon, Collins mapped out the Dirtbombs' discography-to-be in a spiral notebook, then doubled up on a pile-driving rhythm section to back his fuzz-drenched, caterwauling guitar riffs. "I really just wanted to see what it sounded like," he says.

Serendipity steps in again on We Have You Surrounded. The album was originally planned as a five-song EP centered on the song "Leopard Man at C&A" — which was penned by graphic novelist Alan Moore (V for Vendetta), who moonlights in a band with David J, a member of '80s gloom merchants Bauhaus. "I read that he had written the song for Bauhaus and that they had recorded it," says Collins. "I looked for a year, but I never found it. So I finally decided, I'm just going to write my own music to these lyrics."

Collins was so stirred by Moore's "fabulous take on urban paranoia" that "Leopard Man at C&A" became the catalyst for We Have You Surrounded. "Every song, no matter how it started, is about urban paranoia," he says.

Yet, Collins says, the thematic ties weren't intentional. Once the project started coming together, it just took on a life of its own. "I didn't think that it would be anything out of the ordinary to focus on urban paranoia," he says. "Every hip-hop record, to an extent, is about urban paranoia, so why not a rock band? And in Detroit, it's a constant undercurrent throughout all our music. You can't escape it. It's part of how we make music here. Sooner or later, somebody's going to throw something through a window or pull a switchblade on somebody in one of your songs. It's just what we write about in Detroit."

From the roar of impending doom in "Ever Lovin' Man" to the locked-in new-wave dance groove of "Wreck My Flow," We Have You Surrounded resonates with passion, humor, and sheer velocity. It references enough genres, styles, and eras that — like most of Collins' work — it's nearly unclassifiable. Which is really the whole point.