DON'T LOOK BACK IN ANGER 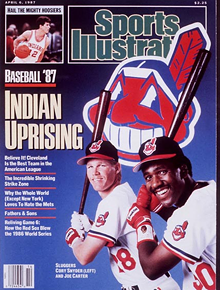 Hypothetical: You're allowed to watch one decade of Cleveland sports and one decade only. Which do you choose? Remember, you will never see games from another decade.

Things to consider: Does the overwhelming success of one team mean more than all-around success in more than one sport? Do you weigh championships and playoff appearances more than the chance to see all-time great players? Could you give two shits about basketball? Is it all about baseball for you?

Note: Basketball seasons count toward the decade in which they began, not the one they end in, so the 1999-2000 Cavs are in the '90s. Options start in the 1940s, when the Browns were founded.

Even though the Browns don't show up until 1946, once they do, they take the AAFC like gangbusters. Motley, Lavelli, Graham and company simply don't lose, winning each and every championship during those four years before joining the NFL. The Tribe wins its first World Series since 1920 (and, of course, the last one in team history), you get Bob Feller in his prime for 10 years, plus Boudreau, Paige, Doby and others. Even with six years of mediocre baseball and nothing else on the slate until 1946, I'll take five championships, including two in the same year (1948), thank you very much.

The distance between the 2000s and 1960s is infinitesimally small in my vote. It basically comes down to whether you'd rather watch LeBron or Jim Brown. Sure, the Browns won a title, made it to more championship games and were arguably more successful as a team during that period than the Cavs were in the past five years. But LeBron wins here, which takes nothing away from Jim Brown, the second guy (or the first) you would pick if you could tell your kids about one athlete you grew up watching. Not to mention that when Brown is done, you get to watch Leroy Kelly. Not too shabby. It'd be like following LeBron with someone like Carmelo when he was in his second or third year. Wait. Let's not talk about LeBron leaving.

The point is: Watching Jim Brown in his prime and watching him for six years is more enticing than watching a team dominate a decade like we're about to see.

The move from the AAFC to the NFL did little to slow the Browns down. They won the NFL championship in their first year in the league, made six straight appearances in the title game and won three, and Jim Brown began his journey toward legendary running back status. The 1960s are ranked ahead slightly, because 1964 brings the city its last championship, but the 1950s are damn close, even with a depressing World Series.

One word for this choice and one word only: LeBron. Totally overshadows the 10 years of putrid Browns excrement that has been laid at our feet. Makes up for the devilish way in which the Indians' magical 2007 campaign ended with the magician pulling a dead rabbit out of his hat and throwing the bloody, limp carcass at fans.

Twenty years from now, when you're telling your kids about Cleveland sports, is there any way LeBron isn't at the top of the list, right above or below Jim Brown? Transcendental figure. Took the leaps from prospect to star to superstar to one-of-the-best-in-this-era to possibly-one-of-the-best-of-all-time in record measure. Yeah, he hasn't brought us a championship yet, and who knows what will transpire once July 2010 rolls around, but name another guy who could single-handedly redeem an entire decade of sports failure.

Forget the Indians. Save for the Sports Illustrated jinx, there's really not much to say or remember here. The Cavs didn't make the playoffs as often as they did in the 1990s, but the formidable Daugherty/Nance/Price/Ehlo/Harper years were 1987-1989, and those are the ones we love the most. And for a certain sect of Browns players, nothing will ever capture our hearts more than Bernie's bunch. Yeah, we lost in dramatic and soul-scarring fashion, but tell me you wouldn't love a chance to go back and see your favorite players again. Tell me you wouldn't take prolonged success even if it meant that, like your father did, you would cry in front of the television as if the announcers just told you your whole family had died. OK, maybe it wouldn't be that great.

As much fun as the exhilarating ride was at the corner of Carnegie and Ontario, as unforgettable as the sellouts and the comebacks were, as special as Belle, Thome, Ramirez and others were, there is no getting past Art Freaking Modell here. You can't reasonably argue that the decade that you would choose to watch would include your favorite NFL team being ripped away. It's not the worst choice in the world, but it's fallen this far because of it, even though the Indians enjoyed unprecedented success.

Yeah, not even worth a discussion.