Iron & Wine's Sam Beam is a nice guy -- though you'd never know it from his music. 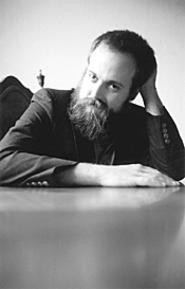 Sam Beam's songs have been used in films from In Good Company to Garden State.
Sam Beam has never quite been the good-hearted alt-folk sweetheart that a cursory listen to his music as Iron & Wine would suggest. Hollywood music directors, equating Beam's gingerly picked acoustic guitar and hushed harmony vocals with quiet nights beneath twinkling stars, have begun using Iron & Wine songs to soundtrack movie scenes that actually don't have much to do with the dead babies and rotting trees and torched farmhouses Beam sings about. Example: Was director Paul Weitz listening when he used the spectral "Naked as We Came" -- in which Beam observes that "one of us will die inside these arms" -- on the soundtrack of the romantic comedy In Good Company? (Zach Braff, the goodhearted Scrubs sweetheart behind Garden State, gets a pass for his use of Iron & Wine's cover of the Postal Service's "Such Great Heights" in his indie-friendly film, since the Postal Service tune is absolutely about quiet nights beneath twinkling stars.)

Because this slight misinterpretation of Beam's music is currently helping to pad his two young daughters' college funds, it's not something the singer-songwriter is likely to put much energy into correcting anytime soon. Yet it's hard not to hear his new six-song Woman King EP, a quick follow-up to last year's Our Endless Numbered Days full-length, as an attempt to shock those casual listeners.

For one thing, the music is the toughest Beam has yet made, with more percussion, electric guitar, and violin than he's ever used. It's still quiet stuff, but there's an ominous energy seething below the pretty surface. The stories Beam tells, too, are notably darker: In the title track he imagines seeing a "woman king, sword in hand, swing at some evil and bleed"; in "Jezebel" he sympathizes with the biblical schemer, singing, "You're the only shape I'll pray to, Jezebel"; in "Evening on the Ground" he notes that "we were born to fuck each other one way or another." The friction between Beam's pulpy, impressionist words and his carefully detailed music makes for bewitching listening; you keep going back to the songs, trying to reconcile the opposing forces at work within them.

That task gets no easier when you call Beam at home in Miami, where he lives when not touring. Unlike most musicians, who parcel out their precious interview time in tightly scheduled 20-minute packages, Beam prefers that writers just call him any time; if he doesn't answer or he's busy when he picks up, he'll find time to answer questions later in the day. When he does get back to you, he's unfailingly courteous and genuinely warm -- a good-hearted alt-folk sweetheart, basically. Example: How has his life changed over the last couple of years, as interest in Iron & Wine has grown? "Well, I don't have to go to work," Beam offers in his gentle Southern drawl. "Now when I'm fooling around on the guitar, I can tell my wife that I'm working. And she can tell me to take out the garbage."

Beam's last job was teaching cinematography at a college in Miami, which he stopped doing about a year ago. When he first landed in Florida, he was doing a lot of production work on commercials, which eventually led to the teaching gig. "It wasn't like I had a burning desire to teach," he explains. "It was very gratifying for me, because I kind of came into it with a bad attitude. A teacher makes you get really specific with what you know. I found that really inspiring."

The experience shows in his music, of course, which overflows with rich imagery: "red sunlight," "two shirtsleeves waving as we go by," "wet flowers on the ground," "fish heads running from rain." Each element of Beam's songs feels deliberately selected from a large pool of options; there's a pungent specificity to his lyrics and melodies that eludes many of the guitar-strumming moon-june folkies of Beam's ilk. That's partly the product of practice, Beam admits.

"I just try to keep working. I try to make a discipline out of writing. Some days are better than others," he laughs. "I just kind of keep working, and then when it comes about time to put out a record, I just see what I've got and what'll work together."

Like Our Endless Numbered Days, Woman King was recorded in Chicago, at producer Brian Deck's Engine Studios. Beam met Deck, who used to be a member of Windy City alt-blues experimentalists Red Red Meat, when Deck was playing drums for Modest Mouse frontman Isaac Brock's Ugly Casanova outfit, with whom Iron & Wine toured. "We just hit it off as friends at first," Beam says. A few months later, it came time to put out a record, and Beam knew he wanted to work more percussion into the music than he'd used on previous recordings. "But I wasn't quite sure what," he says, so Deck became his go-to man.

Though Beam demos everything at home himself -- "I don't have a very good memory, so I never remember what I'm doing," he explains of his constant self-taping -- he says he and Deck did a fair amount of improvising in the studio. "We work kind of fast, because we don't have a whole lot of money to spend," Beam explains. "Hopefully in the future, we can play around some more."

When they do, more unlikely left turns from Iron & Wine likely await. Still, giving credence to the nice-guy persona his music creates, Beam's quick to dismiss the idea that Woman King represents such a detour. "It wasn't like 'It's an EP, let's try something totally different and freak everybody out,'" he laughs. "It was a natural progression. I just don't want to put out the same record every time."