Drink of the Week 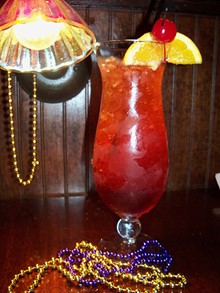 When it comes to fueling Mardi Gras festivities, New Orleans' go-to drink is the Hurricane. Made famous by the French Quarter watering hole Pat O'Brien's, the fruity rum concoction was developed to liquidate a surplus of booze during World War II and earned its name for the shape of the glass in which it's famously served. But if the snow has purged your Fat Tuesday dreams, recapture the magic at Salmon Dave's in Rocky River. Along with a menu that veers decidedly toward the flavors of New Orleans — and a lineup of jazz to match — the ever-welcoming restaurant specializes in re-creating the Hurricane as revelers know it down south. The rum is Bacardi Select, the mix is Pat O'Brien's, the price is an unheard-of-in-N'Awlins 10 bucks, and the kick is as delightful as a parade down Canal Street. Save the airfare, savor the drink: Salmon Dave's is at the corner of Detroit and Lake roads in Rocky River; call 440-331-2739 or go to hrcleveland.com for more info. — Erich Burnett