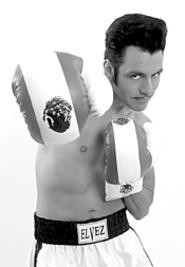 Just as Marcel Marceau pushed mime beyond the "Help, I'm trapped in a box" shtick, El Vez (Robert Lopez) pole-vaults ahead of the Howard Johnson lounge-act crowd with a multilayered, vaudeville-meets-CBGB extravaganza of politics, song, and theatrics. Unlike Marceau, the extent of whose recorded work is an actual hour of silence, titled An Evening With Marcel Marceau, the "Mexican Elvis" makes very good records. He swings, musically, between José Feliciano and Green Day, and makes references to the Zapatistas and the KISS Army. The result is freewheeling cabaret, as opposed to Beck-like postmodern schizophrenia. Boxing With God, his first "inspirational" work, is El Vez's eighth loose tribute to the King. He goofs on "Heartbreak Hotel" with a hilarious "Quetzalcoatal." Over traditional Andean panpipes, he sings, "He was an Aztec, baby/He might have been Jesus/He was an Aztec who could fly." With "Lust for Christ," Iggy Pop gets religion. "Can You Kali?" is swinging Hindu R&B. He gives a nod to his California punk roots (he played in the Zeros) with a sneering, straight version of the Screamers' "Mater Delores." It all adds up to a statement of love and universality -- exactly what a good gospel record should be. And the message of the medium is nearly as profound -- a much-needed reminder that giddy, inspiring art can be far more meaningful than the angry, inscrutable sort that infuses the art and rock worlds alike. Live, he croons, growls, shimmies, and changes from Aztec garb to gold lamé, as the honey-voiced Elvettes (Lisa Maria and Priscillita) sweeten the danceable, precise grooves of the Memphis Mariachis. Sound like a joke? Well, certainly there are those who wouldn't deign to call it art. But it's not El Vez who's trapped in a box -- for what box could accommodate his vast, rotating wardrobe?