Dragon Tales comes to life at the Convocation Center. 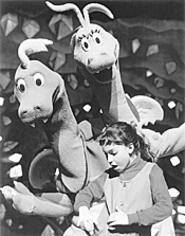 It's a good time to be a pirate. Johnny Depp, as a kinda-fey swashbuckler in Pirates of the Caribbean, has made peg-legged, hook-handed, eyepatch-wearing scoundrels cool. And Noland McFarland, who plays pirate Captain Scaliwag in Dragon Tales Live: Journey to Crystal Cave, loves every minute of it. "There are many ways to play a pirate," he says. "I had an idea on the characterization, so there wasn't a lot of hard role work for me."

Scaliwag won't be mistaken for a traditional buccaneer. He does sport the requisite hook-hand and parrot on the shoulder (no eyepatch), but this captain is one of the good guys. "I'm a classic pirate. But usually when you think of a pirate, you think of this mean old guy," says McFarland. "[Scaliwag] is there to help out the children." (Dragon Tales Live plays Thursday through Sunday at the CSU Convocation Center.)

Journey to Crystal Cave features all of the animated PBS show's regular characters: six-year-old Emmy, her little brother Max, and dragon pals Ord, Cassie, and two-headed Zak & Wheezie. They trek to the sparkling cavern in search of more power for their waning magic dragon scale, which allows them to travel to and from Dragon Land. There's plenty of music and dancing along the way.

McFarland earned his children's theater chops with nine years of Sesame Street stage productions, in addition to musical theater and Shakespeare. "I don't think the average 44-year-old can do what I do," he says of the rigors of the role. "I consider myself an actor who does movement. Everything I encounter inspires me."

He also delights in knowing that Journey to Crystal Cave represents most kids' introduction to musical theater. "This is their first impression," he says with a flicker of pride. "At least they're not booing and hissing me."