O.A.R. traveled instantly from OSU to national tours. They have only their fans to thank. 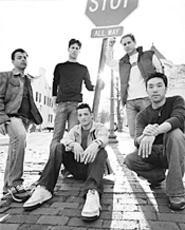 O.A.R., a five-man band from Maryland by way of Columbus, is a jam band for the Napster age.

The group, which mixes reggae, folk, and agile acoustic rock into what it calls "island vibe roots rock," arrived at Ohio State in 1997, its members having already attained a modest following as high schoolers in their native Rockville, near D.C. Within three years, they were a breakout regional favorite in Cleveland and throughout the Midwest, playing Big 10 college fraternities regularly. By the time founders Marc Roberge (vocals/guitar) and Chris Culos (drums) graduated in 2001, O.A.R.'s legion of fans had grown to the point where the band could embark on a national touring schedule immediately, playing to crowds of 1,000 to 2,000 people everywhere it went.

"In a band, you just want to go out and play music for a living," says saxophone player Jerry DePizzo, 23, by phone from a tour stop in Memphis. "And it's actually happening. It wasn't a complete shock, but it was a nice surprise to sell out a House of Blues show in Los Angeles, for example. We were able to take a couple trips out west while we were in school. We did shows in Arizona and Las Vegas."

DePizzo, the only band member not from Rockville, pauses to consider the group's good fortune -- how MP3 downloading, CD burning, and the explosion of Napster and other file-sharing programs in 1999 and 2000 accelerated the grass-roots marketing of the band into the unknown. "If you're looking for a definitive answer [as to how this happened] . . . I really don't have one for you," he says.

O.A.R., short for . . . Of a Revolution, had released four albums on its tiny Everfine Records label (essentially a holding company for the band) and sold more than 250,000 copies before signing an imprint deal with the major label Lava Records last year. Its latest album, In Between Now and Then, released in May, debuted at No. 54 on the Billboard Top 200, selling over 20,000 copies its first week out.

While Phish, the modern benchmark for good-timing grass-roots success, formed as a group of Vermont college students in 1983, it didn't release its first real album until 1988 and had to work its way through the bar circuit for several years before the cult that developed around it had spread. Phish's members were pushing 30 when casual listeners discovered them. Phish, however, never had the internet to fan its early flames, and that's where O.A.R.'s saga lies.

Diehard fans, almost all of whom are under age 25, offer stories by phone and e-mail of friends introducing them to the band and inspiring them to download specific songs. Eventually, these fans say, they attended Ohio and D.C.-area shows, and from there, they told other friends, burned songs onto CDs, or zapped files through their e-mail and requisite peer-to-peer programs (Napster may be dead, but Kazaa, Limewire, and Morpheus live on).

"This was the only way to hear a band like O.A.R., unless you lived in the Columbus area," says fan Sam Corea, who stumbled upon the band in 1999 as an undergraduate at Miami University in Oxford. Corea now runs a site dedicated to the band called "Destination . . . Of a Revolution" (http://samsee.tripod.com/ofarevolution), with fan reviews, discography, photos, and news.

The song most often mentioned as the hook for the movement is "That Was a Crazy Game of Poker," a groovefest of a ballad. The song shows off Roberge's whimsical, albeit bar-soaked chops as a lyricist: "And I said, Johnny, what you doin' tonight?'/He looked at me with a face full of fright/And I said, 'How about a revolution?'/And he said, 'Right.'" Live versions of the song regularly stretch past 13 winding minutes.

"Honestly, the song is a good party song, whether you are drinking or just hanging around with a group of friends," says Ed Paff Jr. of Cincinnati. "For me, the song has meaning, because it was the song that first got me listening to a band I consider one of my favorites now."

A few fans' dedication has reached true techie-geek levels. Paff recalls friends and associates using old-school FTP servers -- the predecessors to open file-swapping -- to disseminate the music. Paff himself fell in love with the group enough to start a website (www.oarsa.org) that compiles set lists of the band's shows, always a popular jam-band service.

While rabid believers helped spread the word about O.A.R. -- whose lineup is rounded out by guitarist Richard On and bassist Benj Gershman -- the band itself was savvy enough to embrace new technology. It started a message board, on which DePizzo, more than the others, frequently posts dispatches from the road. The group's website (www.ofarevolution.com) is a busy, deftly animated affair with darting sections, robotically scrolling text windows, and the usuals -- songs, lyrics, and links to fan sites. It took the cue from 'net denizens and fostered the community.

"It's a scary thing for the record industry," says a thoughtful DePizzo. "They have absolutely no control over [internet distribution]. The initial reaction is 'Holy shit, they're stealing our music.' Then you think about it two seconds later, and you say, 'They want to hear our music,' and then you see how it translates into people coming to our shows."

The band's management also aggressively pursues more traditional street-level strategies. Mike Ferraro, a 17-year-old Phoenix high school student, belongs to a 150-member network of fans called the "Street Team." "A year ago, if you said, 'Do you want to go to the O.A.R. show?', they were less known," Ferraro says. "Now they're really starting to turn heads."

Ferraro helps pass out fliers and posters, and pitches the band's virtues to record buyers, coffee-shop patrons, and attendees of football and basketball games at nearby Arizona State University. "We're trying to find high-traffic areas, where we think people who go there might like the band," Ferraro says.

Not a bad deal, for a band that rarely traveled four hours outside Columbus until 18 months ago.

"We came about at the right time and at the right place," DePizzo says. "I never wanted to do anything else. Going to school was a way to be in a band. We were a band and knew we were going to continue on as a band."

What DePizzo, Roberge, and the others never counted on was that cultural changes would allow them, for all intents and purposes, to major in the band. Some students become entry-level grunts for Fortune 500 companies. O.A.R. stepped out of the dorms and into a van-traveling life as a virtual O.A.R. Inc. No more on-the-road homework, no more finals, no more sleepless streaks. John Mayer, a friend of O.A.R. and folky peer who toured with the band last year, has since erupted into the mainstream limelight, enjoying much of the same high-tech push. The momentum behind O.A.R. makes its own eruption seem inevitable, something for the band and its faithful alike to ponder.

"The thing that makes it so great is that they just love the music," says Ferraro of the band. "They want to do their best to spread the music around to other people, so they can enjoy it. I don't think people would mind the band being so popular."