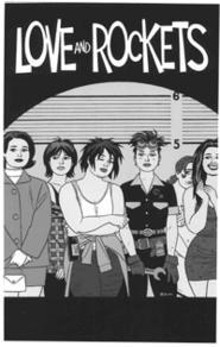 Save the Last Dance
At the time, it was meant to be read as a great compliment: Jaime and Gilbert Hernandez create comic books for people who don't read comic books! A publisher or pitchman couldn't have come up with a more glorious phrase, one magical sentence that would reel in the literate and their loot. Finally, it was safe for the straight and narrow to enter a comic-book shop without feeling like a grubby perv scouting the sticky bins for staple-bound superhero porn. The critics, writing from such lofty perches as The Nation and The Times of London, bandied about comparisons to Gabriel Garcia Marquez and Carlos Fuentes; they tossed around phrases like "magical realism" and other leftover lingo from college-lit courses. They adored the brothers for what they weren't (comic-book writers, ink-and-sweat-stained geeks penning supermen-in-tights tripe for the grown-up toddler) as often as they celebrated them for what they were (comic-book writers, ink-and-sweat-stained artists penning thoughtful, evocative Latino-centric literature for the grown-up grown-up).

But that was nearly 20 years ago, back when Jaime and Gilbert threw their comic book Love and Rockets into what was then the junk heap of pulp fiction--a pile of silly, musclebound titles, kiddie fodder with rare exception. At the time, they were two Hispanic twentysomethings from Southern California, punk-rock freaks raised by a mother who collected comics and allowed them to be read by her boys at the dinner table; their own work would later reflect the range of what they consumed, everything from Superman to Betty and Veronica. But more important, Love and Rockets nearly single-handedly proved it was possible for novelists to exist between the slick covers and hand-drawn lines of the comic book. Jaime told small, intimate stories about women named Hopey and Maggie in lust and love (sometimes, with each other), while Gilbert created a mythical South American town called Palomar and gave birth to the most human of heroines, the put-upon Luba, who bathed Palomar's residents but could never quite get the world's grime off of her own skin.

From 1982 to 1996, Jaime and Gilbert--Los Bros Hernandez, as they're known among the acolytes--published 50 issues of Love and Rockets, and they stuck with those characters during that entire period. What they ended up creating was nothing less than their own universe populated by characters who became as familiar as friends. For newcomers late to the craze, that was often maddening; it was like coming in on a soap opera 40 years too late. But at the beginning of a millennium, old friends return, and they've been rendered familiar even to the novice: This month, the brothers return with a second volume of Love and Rockets.

"People have heard of Love and Rockets, and sometimes a lot of people will say, 'OK, show me,'" says the 43-year-old Gilbert. "Well, here it is, and when they pick it up, they will be able to just follow it right from the get-go, at least in the first few issues. I'll get crazy later, I'm sure. But unlike most pop culture, our work demands your attention and having a memory. The most difficulty readers have with my work, at least in Love and Rockets, was that you must remember what's going on. You must remember who somebody is, what their past is like, and it's difficult. I understand, because I look at other comics that I don't understand and have the same problems. They're not good comics. I'm talking about mainstream stuff, like an X-Men comic book."

In 1981, the brothers submitted the first issue of Love and Rockets to The Comics Journal editor Gary Groth, hoping for a review in his magazine, but Groth decided he wanted to do more than merely evaluate Love and Rockets. He wanted Fantagraphics, The Journal's parent company, to publish the book, which he received as a 32-page fanzine printed on flimsy newsprint. Groth initially loved the book because it bridged the gap separating the mainstream and the underground. He would describe it in his introduction to the debut issue as "hallucinatory...naturalistic and richly textured," and he insisted there were parallels to the early, influential works of George Herriman (Krazy Kat), Frank King (Gasoline Alley), and E.C. Segar (Popeye). Eighteen years later, Gilbert agrees: He insists he initially envisioned Love and Rockets, at least his contributions, as "Gasoline Alley with Hispanics." Groth, who celebrated within his magazine's pages disregarded underground icons such as Gilbert Shelton and Robert Crumb while condemning the lazy superhero hackwork going on at DC and Marvel, had found in the brothers his own revolutionaries to publish and publicize.

"They were bringing in the sensitivity of the underground--that freedom and imagination and the cartooning chops, along with a strong narrative drive and emphasis on characters," Groth says. "All through the '80s, we were excited about Love and Rockets and The Bros. There were a lot of cartoonists who were part of this period, this revolution in comics, but The Bros always had a central place in the revolution. I'm actually not sure when I realized they had represented a real turning point in comics. The funny thing is, although there have been a lot of cartoonists that have been influenced in some ways by their work, nobody has gone on and done anything like they have."

The brothers stopped doing Love and Rockets in 1996 simply because they found themselves too tangled in their own dense storytelling; they felt the need to simplify, to clean up the clutter. But they wouldn't abandon their characters: Jaime kept telling Maggie and Hopey tales in Penny Century, and Gilbert would return to Palomar in New Love Comics. (Jaime's later work is collected in the just-released Locas in Love; Gilbert's can be found in the new Fear of Comics.) But they discovered that once they retired the brand name, their audience deserted them: Groth estimates that sales of Gilbert and Jaime's work dropped off 30 percent once the name Love and Rockets was no longer attached to it. "If you take 100 percent of any fans of anybody, whether it's Love and Rockets or Tom Hanks," Groth says, "and if you change the way they're produced or disseminated, X number of those fans are gong to be lazy enough to drop out."

Last year, Gilbert and Groth hatched the idea of resuscitating the title. They both admit it's nothing more than a marketing ploy, a way of reviving the trademark and luring back those lapsed, lazy readers who stopped panning for Hernandez gold in the comic industry's sewer system. The new Love and Rockets will resemble the original series, but it will also allow enough room for the novice to enter without becoming overwhelmed by 20 years' worth of accrued mythologies. Jaime will reintroduce Maggie by ridding her of two decades' worth of baggage: She is divorced and alone, a blank slate. Gilbert will contribute two pieces: He and brother Mario begin an adventure tale titled "Me for the Unknown," and Gilbert will debut the first chapter in his serialized graphic novel titled "Julio's Day." The latter will not be an ongoing series; once the story is finished, it is forever done. There will be no reviving its characters or its setting, which is the antithesis of his earlier work in such stories as "Human Diastrophism" and the epic "Poison River," which contains Luba's origin story. (It's collected in a single paperback that does indeed read like a brilliant, self-contained novel--a soap opera set amid Marxist revolution and mambo beats.)

"I tried to shoehorn as much as I could into those stories," Gilbert says, "but particularly in 'Poison River,' that became a burden for the reader, so I always thought, 'One of these days, I'm gonna do one of these stories where, after I'm done with it, I can't use the characters again.' I just made my own rule: I can't ever use these characters again, like a real novel. Whatever I put in here is it. With the Palomar characters, I couldn't do that, because I knew I would revisit them one way or another in other books. I knew there were other stories, so that's why I never felt a series of books were real novels. Like, a sequel to Moby Dick is absurd, ya know what I mean? There are some books where you just need to leave them alone, and that's what I always wanted to do in comics--do a graphic novel where I leave it alone once it's done, and that's it, goodbye."

Gilbert insists he will return to Palomar only if readers demand it; he has stories left to tell, though little interest in doing so unless readership continues to wane. He just had a daughter and will do what he must--on his own terms, he insists--to keep from having to get what he sneeringly refers to as a "real job." He is finishing a book for Time-Warner-owned DC's adult-oriented Vertigo offshoot--titled GRIP, it's about a man who wakes up one morning with amnesia--and appreciates working for a company that pays, but would prefer keeping his work at Fantagraphics, where creators keep control and ownership of their own work, which is still almost unheard-of in the comic business. And Groth would prefer that the brothers keep from having to take outside work: They are the Beatles of the comic-book industry, oft appropriated but never imitated.

"They're so good, you start taking them for granted," Groth says. "There's no longer the shock of the new, of course, but there's just this great satisfaction that they're doing work every bit as good as they did in the past. Maybe our relationship is like a long marriage: There's no longer the sexual epiphanies, just this sense of pleasure and happiness."