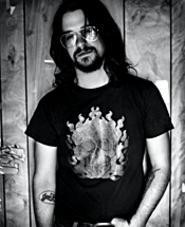 His name is Waylon Albright Jennings, almost like his father's -- Waylon Arnold Jennings. Just don't expect him to answer to it.

"I've always been Shooter, from the day I was born," Jennings says. "I peed on the nurse the first day in the hospital. That's how I got the name."

With his long dark hair and beard, and a strict adherence to the denim-and-flannel dress code, Shooter Jennings possesses much of the rugged machismo of his dad. And he's following in his father's footsteps. In March, Jennings released his debut CD, Put the "O" Back in Country, proving that he inherited both musical skills and an outlaw attitude from his famous parents.

But even a tough guy like Jennings, who has CBCS ("Country Boy Can Survive") tattooed on one arm, occasionally fails to answer the bell. Jennings had to cancel a show at Talladega Superspeedway recently because of a cracked rib, suffered after he fell off a stage.

"It might have been cracked before," he says. "I'd had bronchitis. I'm still not feeling too good. I might have coughed real hard and cracked it a little. It didn't hurt until I fell."

Shooter's the only child of Waylon Jennings and Jessi Colter, both card-carrying members of the outlaw country movement of the '70s -- an unofficial club, consisting primarily of Texans, that revolved around Willie Nelson and Shooter's father, who died in 2002 at 64. He isn't the first Shooter to enter the pop-culture world. That belongs to a character in the 1986 film Hoosiers, a drunken ex-high school basketball star, played by Dennis Hopper, who finds redemption as an assistant coach for his alma mater.

"That movie changed my life," Jennings says. "I was in school, of course, and kids would come up to me and go, 'Shoot-ahh,'" he says, trying to mimic the voices of the small-town Indiana folks who populated the rags-to-riches sports flick.

Speaking of movies, Shooter will make his film debut this fall in Walk the Line, the biopic about Johnny Cash. Shooter plays Waylon.

"I'm only in [the film] for a minute, so it's no big deal," he explains. "It was a lot of fun and kind of trippy, but I'm proud to have been a part of it. Everyone was real nice to me. I want to thank them all, like [director] Jim Mangold, for putting up with a crappy actor."

Too bad Waylon Sr. wasn't around to give the boy some pointers. Before his dad's musical career took off, he starred in Nashville Rebel, a film about a young guitar slinger out to make it big in Music City. Waylon Jennings had four film credits. Shooter's not expecting to match that.

"This is my first film and probably my last," says Jennings, who's all about the music these days.

And it's not his father's music -- Jennings follows the family tradition of doing what feels right to him, and damn the expectations. Jennings started playing drums at age five, switched to piano, and began playing guitar for the first time at 14. He moved from Nashville to Los Angeles and formed a rock band, Stargunn. The group enjoyed strong local success during the seven years it was together (Jennings twice sat in for Axl Rose with Guns N' Roses), but "something was missing," he says.

The whole L.A. scene didn't suit him. Despite his love for rock and roll, the rock-star persona was not who he was.

"I was a country boy trying to be something else," he says.

Jennings escaped to New York in 2003 to sort out what he wanted to do. Deciding there was more rock-and-roll energy in good country music than in image-driven modern rock, he put together a band called the .357s and began making guitar-heavy southern-fried country-rock.

Country's title track is a musical indictment of everything Shooter thinks is wrong with music in general and pop-flavored country songs in particular. Borrowing heavily from Neil Young's "Are You Ready for the Country?" (which was a big hit for his dad), Jennings pulls no punches with lines like "You know there's no soul on the radio" and "If you're talking about record sales, you can Soundscan this."

Most of the remainder of the CD rocks, like the Steve Earle-inspired "4th of July" and "Busted in Baylor County," a true story about Shooter and his guitarist, Leroy Powell, and their run-in with Officer Harley, the drug-sniffing Belgian Malinois who found a small amount of marijuana in the car they were riding in. Unlike other children of recording-star parents, Jennings covers none of his dad's songs on record.

"I feel proud of this CD, and I feel lucky," he says. "I have had just as hard a run as anyone else."

Really? Even though you'll constantly be linked to your legendary father?

"That depends on the critic," he says. "I know I'll get that, because this is my first CD. When I have a few more out, I think they'll start looking at what I do and what I have done, and judge me accordingly."