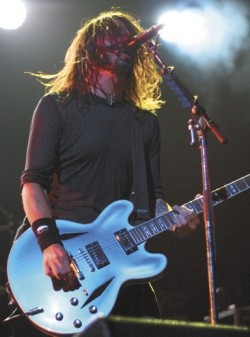 Kurt Cobain once said Dave Grohl was “an important cornerstone in the Nirvana institution.” That sentiment has continued to this day to ring extremely loud and true in regard to his active involvement in the grunge and heavy pop-rock scene. Since 1995, Warren, Ohio’s very own has stood front and center, leading the Foo Fighters in a war against emo — and everything sappy and crappy — in the world of music. The same held true during a two-and-a-half-hour concert at Quicken Loans Arena on Friday night.

As Grohl sauntered down a catwalk, toward the middle of the floor and into the arms of his admirers, he held his ice-blue Gibson guitar high, as if he were armed for battle and ready to rock. The bittersweet lyrics of “Let It Die,” off the band’s most recent album, Echoes, Silence, Patience & Grace, emitted from his lips before all hell broke loose. Fans whiplashed in unison as Grohl and drummer Taylor Hawkins ravaged their instruments. Grohl’s screams not only shook the room but also transported mosh-pit fans (accompanied by spouses and kids) back to their youth.

After recently postponing a few shows due to his road-weary raspy voice, he sacrificed his vocal chords for Northeast Ohio with “The Pretender,” “Times Like These” and “Monkey Wrench.” Pat Smear, Seattle’s key iconic ingredient, accompanied the band on guitar, along with a few other guest performers, during an acoustic segment highlighted by a klezmer version of “Skin and Bones.” Local hero and boxing champ Kelly Pavlik was pulled onstage, but the most important V.I.P. was Dave’s dad, Jim, “the musician in the family,” who was honored with “All My Life.”

During the encore, Grohl dedicated “Big Me,” from the band’s first album, to “the old-timers and newbie virgins” before Supergrass’ frontman, Gaz Coombes, shared the mic with Hawkins and dusted off “Bargain,” a cover of the Who’s. “That was fucking right,” exclaimed Grohl.
England’s Supergrass warmed up the stage with old hits like “Richard III,” while adding pieces from its current album, Diamond Hoo Ha. Although the band didn’t make it big in the U.S. back in the day, its Bowie/Stooges/Cheap Trick fusion impressed those who watched its set. --Shelly Greenberg

Midway through !!!’s 45-minute set, frontman Nic Offer lamented the fact that, since its inception, his band has played Cleveland “eight times to the same eight people.” Offer was fibbing about the last time the band visited here — when there were way more than eight people in attendance and he told roughly the same story. This, as Offer himself rightly claimed, was the band’s best visit to town. It takes a special band to make the Grog Shop dance and crowd surf on a Monday night. And on this night, !!! was that special band, as it gave a performance worthy of the three exclamation points that make up its name.

The current tour is a bit different from your typical indie-rock jaunt, as the band doesn’t have any new product to promote. It played two new tunes during a nine-song set and spent the rest of the time basking in the brilliance of its last two albums, Louden Up Now and Myth Takes. Offer spent much of the show dry-humping the air and flailing his gangly arms, nearly hitting his fellow bandmates on a few occasions. The set included a manic version of “All My Heroes Are Weirdos” and a transcendent rendition of “Dear Can.” Fans jumped onstage during a raucous “Must Be the Moon.” It was during that tune that the band finally functioned on all its proverbial cylinders, with Offer and co-vocalist Shannon Funchess swapping turns leading the song. One of the aforementioned new songs followed. And then the band turned in a definitive version of “Heart of Hearts.” When a group brings the house down with a tune and causes half the audience to join it onstage, it really doesn’t need to play an encore. And !!! didn’t. — Jeremy Willets

The $2 ticket price was obviously right, as Cincinnati’s Over the Rhine played to a sizable crowd on a Tuesday night at Cain Park’s Evans Amphitheater. But the audience got a show of heartbreaking beauty and musical dexterity worth far more than $2. The five-piece group, fronted by the husband-and-wife team of Linford Detweiler and Karin Bergquist (the group’s only constants since forming in the late ’80s), performed two sets plus encores — the often moody, sometimes joyful songs becoming more poignant as the light faded and fireflies floated behind them.

Detweiler’s piano intro kicked off the opening number, “I Don’t Want to Waste Your Time,” which laid down the template for Karin Bergquist’s liquid amber vocals, backed by instrumentals that were full and driving yet transparent. They often took on a slight country flavor when the guitarist switched to mandolin or pedal steel, like on the slow, curling “Born,” with mandolin accenting evocative lyrics like “intuition, déjà vu, the Holy Ghost haunting you.” The sultry, jazz-inflected “Trouble,” from the band’s latest album, The Trumpet Child, featured a slight Latin feel, with Bergquist playing acoustic guitar. “I’m on a Roll” steered into jazz territory with its limber, dancing pulse. A cover of Gillian Welch’s “Look at Miss Ohio” rocked hard, but with dynamics that still allowed for Bergquist to virtually whisper the final line. The band concluded several of the first set’s songs with expanded instrumental segments, closing with a Neil Young-like jam on “Changes Come.”

After intermission (or as Bergquist dubbed it, “beer run”), Bergquist sat at the piano for the melancholy title track of the group’s 2003 disc, Ohio. The band dedicated “Drunkard’s Prayer” to Emily and Mike, who had gotten engaged last year at the band’s Kent Stage show. “They wanted to be here, but Emily is in labor,” Detweiler told the crowd. “That’s the next generation of Over the Rhine fans.” Detweiler harmonized with Bergquist on the sweetly folkish “If a Song Could Be President,” introduced as “our bipartisan initiative.” The hard-hitting “Don’t Wait for Tom” mixed Dixieland and swamp-rock influences, and ended with another big instrumental outro. A heavy rendition of the Pretenders’ “My City Was Gone” closed the set but not the evening, since the group returned to send the crowd off with another Gillian Welch cover, “Orphan Girl,” which slowly percolated from a plaintive countrified opening to a full, flourishing finish. Then Detweiler and Bergquist offered the final number, “Latter Days,” as a duo before bringing the band back for a bow. — Anastasia Pantsios

Wednesday at Pat’s in the Flats was a voluminous four-band bill paved for Sic Alps, those heady West Coast masters of reverb-cracked bubblegum gunk, which, to paraphrase a superlative referring to the Clash in ’78, is the only sound that matters anymore. Spewing hooks worthy of a crud-burnished No Dice-era Badfinger, this San Francisco two-piece relied entirely on power chord jangle-slop sing-alongs, swathed in murky distortion and ponderous drumming (the tambourine hooked to the kick drum added immense swagger). The native ethos of Quicksilver Messenger Service-like ’60s ballroom psychedelia surfaced in its tunes, with the jamming condensed to barely two-minute drugstore punk raids, mapped along the Cadillac express. The guitarist and drummer (both of whom sang) not only switched instruments, but also tackled several at once, with the drummer playing both guitar and keyboard behind his kit. The setup was loud and excessive, with amps stacked to the ceiling and effects pedals stomped on until one broke and momentum fizzled. After several technical blunders, Sic Alps regrouped with great agitation, closing with an epic centered on the descending-doom riff of Pink Floyd’s “Interstellar Overdrive,” while the guitarist rolled around, slamming his instrument on the ground and eventually kicking over the mic stand.

The highlight of the evening was local power trio the New Lou Reeds, who smoked everyone and almost gave Sic Alps a run for their grimy. While the band commenced with a string of brash proto-metal yelpers that would’ve made its heroes Dead Moon proud, guitarist Stephe DK worked in some double-stopped acid-blooze leads that slalomed into celestial-sunshine freakouts backed with motorik grooves. A far cry from the garage-y bar filth they’re usually associated with, the New Lou Reeds have melded into one of the most uniquely energetic psych-sludge outfits around. It’s no wonder Julian Cope worships this band. Opening and closing the bill were Thee Scarcity of Tanks and its drumming coterie, Scheibel & Laughlin Duo. The former was uniformly cankerous rock, except for one dub-flavored showstopper called “Healthy Living, Bug Melter,” while the latter brought cymbal-pelting, dueling-whirlwind percussion of the extreme Rock ’Em Sock ’Em Robot variety. — Steve Newton

Latest in Being There