Now more than ever, payola makes the radio world go 'round. 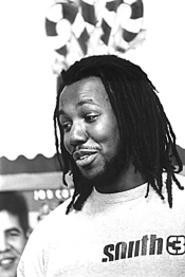 Hip-hopper Jahi hopes his music sells itself.
Next to Art Modell, Cleveland radio is perhaps this town's favorite whipping boy. And generally receiving the most lashes are the urban stations, WENZ and WZAK, which are perpetually berated by local artists for not supporting their own and for proffering lukewarm, homogenized programming.

So why do these stations play what they play? Why do they stick to a playlist that nets them so much criticism? Well, to understand the way things work in the radio industry these days, one has to learn the new definition of an old term: payola.

"It's very accepted, and it's very prevalent," says David Avery, head of Powderfinger Productions, a national radio promotions company based in Boston, on the matter of payola in the radio industry. "The way it used to work in the '70s was, the promo guy from the major label would go to the station, set them up with dope and cash and girls, and they'd play the record. They'd go straight to the DJ. That's payola. What's happening now is that, instead of doing that, the record labels just hire the promoter to be the middleman for the payola. Now, the promoter sets up the payola. It's like 'Well, if you add this record, there's going to be $3,000 that shows up in your account.' This really happens."

But does it happen in Cleveland?

"Of course it does," says Cleveland-bred rhymer Jahi, who records for Chuck D's Slamjamz label. "It's always existed, and it always will exist. A lot of times, they disguise it as advertising dollars. You know, 'I'm gonna give you five thousand dollars. I want a couple of commercials.' Then you get one commercial and some spins on the radio. It's like the cat on the corner that you know is selling dope, and you ask, 'Hey, does he sell dope?' Everybody's going to tell you no. Of course they're going to tell you no. But if you're in that neighborhood, then you know that exists, and you pretty much know who you can go to."

"Do I think there's payola in Cleveland radio? I would have to say I think there's payola at every radio station," states Tony Franklin, a Cleveland radio promoter for urban music who says that he refuses to pay money to stations, preferring instead to work records by building relationships with DJs. "It does exist. Believe that or not. I'm only tellin' the truth, dog."

And the truth is that the airwaves are for sale. It all centers around the "indie" -- the industry term for an independent radio promoter. Indies serve as intermediaries between record labels and radio stations. For a fee, indies promise airplay for an artist. How do they get this airplay? They take the money they're given, and after pocketing a cut, they pay radio stations "promotional payments," which in turn gets their music considered for airplay. Oftentimes, an indie will pay a station a six-figure sum to become the exclusive promoter for the station -- or the one who gets to pitch his product first -- and will, in turn, get paid anywhere from $500 to $6,000 from the record company every time one of his songs is added to the playlist. It's futile to try to get around indies. They literally purchase the rights to guard playlists, and most radio programmers won't even talk to independent artists or labels unattached to a promoter.

They won't talk to the press, either. Both Sam Silk, the music director for WENZ and WZAK, and Lance Patton, the program director of both stations, declined to return phone calls inquiring how they determine what gets played at their stations.

But if they're not talking, the money is -- in all of radio, not just those of urban stations. Every format is subject to the influence promoters. Where urban stations differ from, say, those of the rock variety is that, for one thing, it generally costs more to get on urban stations. To see chart action on a rock radio station, indies normally charge anywhere from $4,000 to $10,000, depending on market size. To get on an urban station, the fees can double. Urban radio is so competitive that it takes that much more money to grease the wheels.

Moreover, when it comes to rock radio, indie payments are often made to the stations themselves and become part of the station's budget, meaning it helps pay for billboards, equipment, and things of that nature. For urban stations, payments are traditionally made off the books, directly to someone at the station. Earlier this year, two broadcast companies with the most urban radio holdings, Blue Chip and Radio One, passed on attempts by two of the country's biggest radio promotion firms to sign lucrative, exclusive deals where all proceeds would go directly to the stations and not to individuals.

Why would Radio One, which owns WENZ and WZAK, pass on millions in favor of a system that allows individuals to potentially benefit over the stations they serve? It's tough to get an answer to that question -- or any other, for that matter, from the notoriously hush-hush urban radio industry, where business practices are kept on the down low. For instance, whereas radio promoters for country, metal, jazz, and rock freely advertise in industry trade publications, urban radio promoters are, for the most part, conspicuously absent. They tend not to draw attention to what they do, and neither do the stations that work with them. But while it may be difficult to get those within urban radio to discuss their actions, it's not so hard to see the outcome of these actions, as the current pay-for-play system has created a virtual firewall of cash, preventing artists without deep pockets from getting airplay.

It's easy to hear which they prefer.