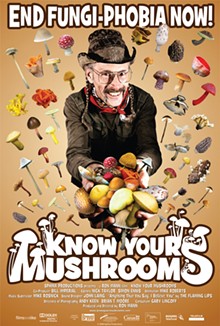 Part Discovery Channel-style nature doc, part totally awesome mind-fuck, Know Your Mushrooms digs up the historical and social impact of shrooms through the ages. Using Telluride, Colorado's annual four-day Mushroom Festival as its springboard, the film chronicles pretty much every facet of mushroom culture (yes, there is one).

A bunch of shroom experts, amateur hunters and other fungus fanatics discuss both the culinary and mind-altering — um, medicinal — benefits of their favorite spore-bearing food source. Authors, educators and some hairy young dude who can barely put together a sentence weigh in too. Plus, there's lots of time-lapse photography, CGI animation, traditional animation, ancient PSAs and old TV commercials.

But the best testimonials come from festival attendees — old and young, extremists and newbies, curious nature hikers and Birkenstock-sporting hippies. "There's something really cool about finding free food," says fungus hunter Larry Evans, a self-described "mushroom gypsy" and the film's chief mushroom proponent. "Going out in the woods and, 'Hey, you can eat that!'"

And surprisingly, most fest-goers indeed feast on the shrooms, rather than trip on them. Still, there's a whole section of the movie dedicated to the fungi's hallucinogenic qualities, including a clip from 1933's Alice in Wonderland (natch) and music by the Flaming Lips (ditto).

Along the way, you learn that wild-mushroom fans have a big problem with the commercial mushroom industry. There's a biological lesson on fungus (apparently it stretches all the way back to prehistoric times or maybe aliens put it here; experts are divided). And at one point, Evans leads a group into a Colorado forest in search of mushrooms, and more than a dozen types are discovered, collected and presumably eaten. That's pretty much the point of the entire film.

So yeah, everything you ever wanted to know about mushrooms is packed into this 75-minute movie: which ones are toxic, which ones taste nutty, which ones blow the hell out of your mind and carry you to outer space and back. It's incredibly informative and amusing, and it certainly doesn't take itself too seriously. It's quite a trip.