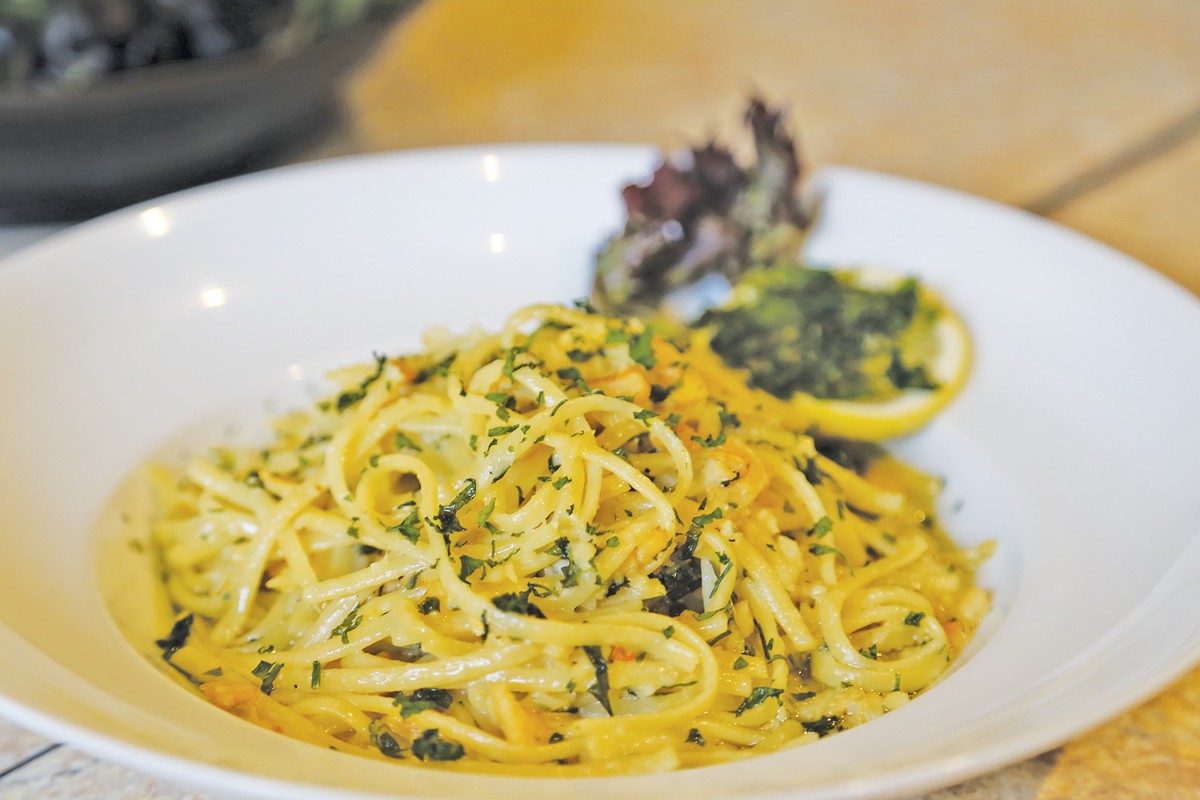 After more than 60 years of doing business in University Heights, there's not much left to learn with respect to serving guests. Since 1956, Frances and Michael Geraci and their heirs have been turning strangers into friends, friends into extended family, and family into one of the hardest working talent pools in Northeast Ohio.

Unfortunately, that warm, well-honed hospitality has yet to be unboxed at the iconic eatery's new suburban location. Two recent meals, a lunch and a dinner, were marred by awkward, poorly timed pacing that managed to overshadow the reliably delicious Italian-American bounty.

In the case of our lunch, the snags began immediately and persisted for nearly an hour and a half, at which point we were compelled to pack the remainder of our meals into to-go containers and hustle back to work. Arriving at midday on a Thursday, we were happy to see a lively packed house. What we did not enjoy was being tossed into the middle of a skirmish when the host attempted to seat us at a dirty table. We self-consciously stood around while someone summoned somebody to do something.

It's a good thing I enjoyed my mate's company, because we waited another 10 minutes for menus, 20 for water and 30 for his barrel-aged Manhattan ($14), which was odd considering that the bartender was doing double duty as our server. I'm anything but ignorant of the situation at hand, which revealed a full dining room (including a few large parties) and, given the fact that the bartender picked up a table on the opposite side of the building, a short-handed staff. But it's rarely the delays that miff us, it's the neglect: those stressful chasms of time with no updates on when one's meals might possibly materialize.

If that lunch transpired at 33 rpms, a subsequent dinner played out at 78. At one point in time, our table strained beneath the weight of the soup, salad and bread course, an appetizer pizza, and our two main courses, which were dropped by a food runner just moments after the pie. "Oh, that was fast," our server uttered spontaneously upon seeing them.

I have no doubt that owners Greg and Marti Spoth will right the ship. If anything, the snafus confirm management's conviction that there was pent-up demand for the product by longtime fans unwilling or unable to make the 20-minute drive west to the original. Of course, it's not just the drive that deterred customers, it's the parking, occasional waits for a table, lack of a bar, absence of outdoor seating and, until recently, a nettlesome cash-only policy.

The second location, in the former home of XO Seafood in Pepper Pike, resolves all those issues and more. A spacious, brightened-up interior has more than enough seating in two dining rooms, a private meeting space, and a generously proportioned bar and reception area that easily accommodates carryout orders.

Fans of Geraci's, as a majority of east-side residents are, don't need me to describe the nostalgic jubilance that comes from cracking open a cardboard box concealing those heavenly pepperoni pizzas ($8.75, $15.50). Fragrant bowls of Italian wedding soup ($3.50, $5) are as soothing as the roaring fire in the rear of the dining room. If you enjoy dipping crispy fried things into sauces, take your pick among the calamari ($11), breaded artichoke hearts ($9) or toasted meat or cheese ravioli ($7).

Carb loaders can design their own pastas from a choice of noodles (spaghetti, angel hair, penne ...), sauces (marinara, meat, alfredo ...) and toppers (meatballs, clams, shrimp ... ), all of which are priced accordingly. Geraci's linguini and clams ($17) is loaded with garlic, chopped clams and parsley. The pasta is al dente, the sauce bright and fruity from the olive oil. Other favorites include stuffed manicotti, baked lasagna and spicy shrimp linguine.

Why decide when you can have it all? Hearty mains like eggplant Parmesan, chicken piccata and veal cutlets all come with a side of pasta and sauce. In the piccata ($19), tender scallops of white-meat chicken are lightly sauteed, paired with artichoke hearts and capers, and draped with a lemony white-wine sauce. The veal ($22) is simply prepared and presented: a large flank breaded, fried and plated with a dish of warm meat sauce.

While the two Geraci's locations are vastly different in terms of setting, neighborhood and experience, they are united by food, history and a family that has been in the business of making people happy since the Eisenhower administration. You really can't go wrong at either.

Jump to comments (0)
« Mostly Hits at Fat Head's Massive, and Busy, New Brewpub   |   For Service Par Excellence and an Atmosphere to Match, Look No Further Than the Bull and Bird in Chagrin Falls »