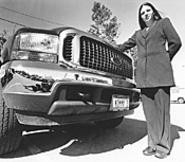 Walter Novak
Kim Barry, next to the chariot she hopes will carry her to Mayfield Heights City Council.

Kim Barry is at the wheel of her Ford Excursion with license plates that announce "Kimmy 3" -- 1 and 2 were taken. This hulking truck is to Barry what the Straight Talk Express was to John McCain. As she rolls through Mayfield Heights, residents honk and wave. Barry blushes happily.

She is a student of the Dale Carnegie text How to Win Friends and Influence People -- "There's a copy of it in every room," she says -- and it's working. If popularity is power, Kim Barry has the ingredients for political revolution.

Barry seeks a seat on the Mayfield Heights City Council, her campaign for which began the moment after a narrow loss in the November 2001 election. Since then, she claims to have visited nearly every doorstep in the city. When apartment buildings lock her out, she begs managers for a candidate forum.

Her popularity is the product of meticulous design. At Mayfield Heights' Unity Days, a giant inflatable pink gorilla held Barry's name high above the treetops. During public gatherings, she hires a pilot carrying a Kim Barry banner to circle the crowd. When, after a night's snowfall, homeowners awaken to the grim task of plowing the driveway, they may be stunned to discover the job already finished. A few days later, a note will arrive in the mail, informing them that the deed was accomplished by candidate Kim Barry, who borrows her father's plow for the task.

There is such a thing as too much ambition, though. Councilman Michael Ballistrea was galled to see a plane-toted banner with Barry's name, encouraging residents to have a "happy" Memorial Day. "That really rubbed a lot of our veterans the wrong way," he says. "Memorial Day isn't a happy day. It's supposed to be a solemn occasion."

In a city where even the mayor's work is part-time, Barry's extravagance is exceedingly rare -- a point not lost on the suburb's political elite. Within these circles, Barry's facility for making friends has failed her. Perhaps they're annoyed by her stridency or her maddening capacity for achieving that most precious political end: ubiquity. Or maybe it's that, at just 22 years of age, she's not only playing with the grown-ups -- she's winning.

Mayfield Heights Mayor Margaret Egensperger is old enough to be Barry's grandmother. This, plus the fact that Barry has yet to win elected office, makes Egensperger reluctant to acknowledge a rivalry. "I don't consider her a threat to me," says the mayor.

In March, Barry stood up at a council meeting to suggest that Egensperger be removed from office. The mayor's impeachable offense, according to Barry, was neglecting to challenge a building inspector's report when a resident called it false. In such a small suburb, scandal is a matter of scale.

Barry's resentment for the building department is inherited. Her father, Denver Barry, a home renovator, first clashed with Building Commissioner Sheldon Socoloff in 1985, over a septic system. Kim and her sister operate a home improvement business called Kornes Construction. The Barrys claim the building department is arbitrary in enforcing code and is nothing short of "running wild," says Kim. "Sheldon Socoloff stinks at his job." (Socoloff refused to comment.)

The Barrys have also been critical of the law department, which they suspect of guiding the city into court as a way to expand lawyers' billable hours. Law Director Leonard Carr calls the claim "ludicrous." Egensperger says the problem isn't City Hall; it's that Barry doesn't understand how it works.

To which Barry scoffs: "She's grasping at straws. She has nothing else to pick on me for, because I'm a great candidate."

Denver Barry tells the story of his 5-year-old "Kimmy" staging council meetings with her stuffed animals. As soon as she could spell, she was mailing her opinions to Washington. "Some kids wrote to Santa," says Berry. "I wrote to senators." In junior high, she got a detention after a screaming match with a boy who told Barry that no woman would ever be President.

Her poise and maturity belie her age. "I'm not your normal 22-year-old," she says apologetically.

After graduating from Lakeland Community College, Barry bought a house on a Mayfield Heights cul-de-sac. With roots in the city, she thought it behooved her to attend council meetings.

Soon, Barry was hooked. She filed her candidate papers in August 2001, just three months before the election. Denver loaned Kim much of the money she poured into the campaign; the rest she had saved from years of babysitting. Denver Barry tacked to his roof a huge banner that bore his daughter's name. Since the banner blocked a window, the city considered it a fire hazard, and it had to be taken down.

Such tactics stand out in a suburb where campaigns are marked by lawn signs and leaflet drops. Egensperger equates the banner episode with high crimes. "She's young," sighs the mayor. "She has a lot to learn. But breaking laws to get something is not the way I was taught. If I want money, I don't rob a bank. If I want a car, I don't steal it."

Others see the youngster in less felonious terms, but it's clear she isn't making friends with Maple Heights' powers that be. "If you want to be part of a group," says Councilman Gregory Costabile, "it probably doesn't help you to be antagonistic toward that group."

Barry lost the 2001 election by just 106 votes, but with all that she's done since, it's hard to imagine her not closing that gap in November. "She has enough name recognition now," says resident Deborah Irvine, and Barry "gets involved."

Barry keeps a file on every resident she has ever met. She never misses a council meeting, where she can reliably be found next to her father, taking notes as he trains a video camera on the proceedings. They line up in sequence during the public comment period, and if one Barry gets cut off by the time limit, the other finishes the thought.

She dives headlong into seemingly trivial issues. Having heard residents complain about skunks, Barry took a crash course on the animal. She then issued a newsletter telling residents that, since skunks kill rats, they might be worth living with.

People on Bonnie Lane were furious that Dominion East Ohio was digging out their yards to lay pipe for a new Costco building. "I called the mayor and a couple of council people, and I got nothing," says resident Nadine Bowen. "Then we called Kim."

Barry not only scolded construction workers; she used her own money to buy the strip of land that was being excavated, thereby giving her the right to file a restraining order against the contractor. The case is still in court. "She's not involved just for face value," says Bowen.

One of Barry's most frequent complaints is that the real action in the city happens in executive session, out of the public view. So she contracts with an attorney to demand access or use whatever methods he can to learn the content of those meetings. She picks up the tab with the profits of her home-improvement business.

Barry won't provide clues about the attention-getters she has planned for this fall, except that they're "bigger and better" than in 2001. She expects to spend around $9,000, roughly twice what council candidates usually spend. The new campaign could engender another round of ill will. Told of Barry's even more flamboyant intentions for this season, Egensperger clucks, "That's a shame."

She sees Barry as an example of style -- meaning the garish variety -- over substance. "She seems to be a nice person," says the mayor. "And if she wants this as bad as she seems to want it, then I hope she wants it for all the right reasons: not to destroy . . . but to build and make the city a better place to live."