Once a rising political star, Jeff Johnson would be happy with his old seat back now 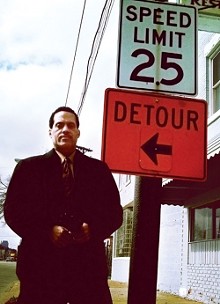 Angela's Family Restaurant at East 71st and St. Clair clanks with the sound of the breakfast crowd as Jeff Johnson steps through the door, squeezes his trim mustache and scans the room with an apprehensive grin. The 50-year-old seems to know half the Glenville regulars in here. When he sits, they stop at his table to pass on some much-appreciated warmth.

He hopes the smiles translate to forgiveness. And votes.

Johnson is "seriously considering" a run this November for the Ward 8 council seat that once propelled him to the state senate, both times in the footsteps of former Mayor Mike White. That was before a conviction for White-style campaign tactics sent Johnson packing to the federal penitentiary at Elkton.

"That year, 1998, could have been, were it not for my bad judgment, a wonderful year for me," says Johnson. "But that's not what happened. I had a picture in my Columbus apartment of the U.S. Capitol, and I had to take it down. I couldn't even look at it anymore."

The Capitol is where many think he would have landed that year, as front-runner in the race for Louis Stokes' congressional seat, were it not for the way he was raising money to get there. (Stephanie Tubbs Jones went to Washington instead.) It had been his goal ever since he set football aside at Kent State to pursue politics. Raised in Glenville and Collinwood, Johnson was a three-sport athlete and dating the head cheerleader when he headed for college. In his junior year, the communications major joined the board of the black student union and complained about the white-bread coverage in the Daily Kent Stater. Connie Schultz, now a Plain Dealer columnist, was editor of the college paper then. She didn't shy from the criticism.

"If you know so much," she recalls thinking, "why don't you start writing a column? I thought it was important to get his voice in the paper."

By the time he graduated, he was president of the black student union and homecoming king. After a semester studying city planning at Cornell, he began his law studies at Case. He joined the Ward 8 Democratic Club and became an apprentice to the up-and-coming Mike White. He laid out White's ward newspaper, organized food drives, whatever was asked.

Four years later, a few weeks before Johnson graduated from law school in 1984, White became a state senator and invited the 26-year-old Johnson to carry on: "Mike was not going to hand his torch to anybody. I had to earn the right to succeed him."

In his half-decade on council, during which Johnson won three campaigns, Council President George Forbes was in charge. It wasn't always pretty.

Johnson had a sprawling patch of desolate land at East 105th and St. Clair he wanted to turn into Glenville Plaza, "and because there were some votes where I didn't vote along with George, he kept holding up that project. He would not pass that legislation." Johnson confronted Forbes at a finance committee meeting. Forbes gaveled the meeting closed and slammed off as Johnson crowed, "You're hurting my community." A few days later, council's black East Side members convened a meeting exclusively to scold Johnson, and heated words between Forbes and Johnson turned to combat.

"He picks up this chair, kept it in his hand and just swung," recalls Johnson. "I ducked, and the leg hit me on the shoulder. I was getting ready to go at this point, but his bodyguard stepped in. Guess you can swing chairs around when you've got a bodyguard."

The legislation was passed soon after, though; Glenville got its plaza. And Johnson preserved his tenuous relationship with Forbes by providing a needed vote to maintain his leadership. "What I learned is that if you don't fight for your independence, it'll be taken away from you," he says.

In 1990, White left the state senate to become mayor of Cleveland. He raised Johnson onto the pedestal to replace him again — some say because White feared Johnson would overshadow his rise to power. So Johnson carved out a niche as an advocate in Columbus, since "most of the decisions are made in rooms you weren't allowed in because you weren't a Republican."

In 1997, the Ohio Democratic Party and the Ohio Bar Association named him Ohio Legislator of the Year. But his ascendency was short-lived. In March 1998, he was indicted on charges of trading his influence in return for campaign cash from Cleveland grocers. In November of that year, 2,000 members on the National Black Caucus were in Cleveland for their convention when his conviction became front-page news.

Grocer Aly Hamed had avoided a food-stamp trafficking and tax-evasion rap by recording 200 conversations with Johnson, who unwittingly exposed himself raising $15,000 in campaign dough and personal loans in exchange for helping grocers obtain WIC permits and liquor licenses.

"Had me on tape," recalls Johnson, "my arrogant self, saying, 'I'm not doing a damn thing else for you until you finish raising this campaign money you said you were giving me.'"

Even in the era of Mike White, it didn't play very well. The only other time Johnson had crossed the law was when he, the late Councilwoman Fannie Lewis and others were arrested outside Tower City for protesting the firing of Cleveland State's vice president for minority affairs.

"I was too aggressive in raising campaign cash," he admits. "It's a hard push to have the resources to run for election, but there's a right method to it, and I took shortcuts. It was wrong, bad judgment, and I paid dearly. The reality is, I went from Senator Johnson to a number within a year."

Schultz says she can see "quite a humility in Jeff now, which says to me: lessons learned. You can get out of prison and always blame it on somebody else — you know, couldawouldabeen — but you don't hear that from him now."

Johnson got out in August 2001 and was immediately hired in Mayor Jane Campbell's communications department. He credits Campbell with allowing him to rebuild his credibility. He quickly became her director of community relations. It was a notable recovery, after having made 19 cents an hour scrubbing prison bathrooms.

"Jeff's a good guy," says former Councilman Bill Patmon. "He's made some errors, but most people make errors. It's what makes us human." Adds Larry Howard, Johnson's pastor at Historic Greater Friendship Baptist Church: "I've seen his change in his attitude, his way of thinking. He's faced up to this, paid for it and has made a major change in his life. He has too much talent to not utilize it for the community."

He's trying. In October 2007, a county judge sealed his felony record, allowing him to run for office again. To "test the waters," he ended up a distant second to Warrensville Heights Mayor Marcia Fudge in the special election last fall to replace the late Stephanie Tubbs Jones in Congress. And the same commission that in 2002 recommended that he be disbarred (the high court rejected that unanimously) recently supported the reinstatement of his suspended legal license. He expects to hear officially this summer.

"I just hope he doesn't run against me," says Mt. Pleasant Councilman Zack Reed about Johnson's return. "People like Jeff, they appreciate him, so I don't think it's going to be as hard as it can be for other individuals to get back his credibility. He's got a reservoir of credibility that I don't think has drained out yet."

Johnson knows that Sweeney, a loyalist to Campbell rival Mayor Frank Jackson, will unleash the Council Leadership Fund against him. He knows things might get negative. None of that matters to him.

"Glenville, it's dying — the foreclosures, the crime — and there's an energy level that needs to be brought back," he says. "I can do that. I'm a better person today than I was before. I'm smarter. And I can be effective at City Hall. I've spent a lot of time working both sides of the aisle there. I'll raise my money the right way, and I expect Marty will spend money against me, but I'm not afraid of that. The real test has nothing to do with Marty Sweeney. The real test is whether voters are ready to forgive me."