Go With the Flo 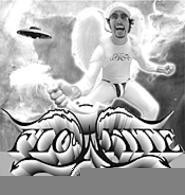 Neil Stanley never seems to leave the stage, even when standing in his West 123rd Street living room, where his only audience is a ceramic rodent resting on the mantle and five dudes crumpled into couches that look borrowed from Jeffrey Lebowski's pad.

Better known as funk live-wire Flo White, Stanley (who fronts a group of the same name) acts as if sitting still costs money. He makes faces, puffs on a murky two-foot bong, does cartoon voices, belches, gesticulates like a cop directing traffic, and seems to have a conspiracy theory for every occasion. His bandmates look on in amusement as Stanley solidifies his burgeoning rep as one of the town's most unhinged showmen.

"I think what happened was, I started selling massive amounts of pot about 15 years ago, right after high school, and that really changed a lot of things," Stanley says, explaining how he came up with his eccentric, oversexed stage persona. "I started reading a lot, I had a lot of free time. I realized then that everything I learned in high school was pretty much a fraud -- except math and learning how to read. From day one, kids are being fed bullshit."

Flo White has plenty of bullshit to peddle too, though it's done with a knowing wink and a healthy dollop of subversive social commentary. The band drops winding funk jams that alternate between 1984-style admonitions against an overreaching government and tales of synthetic babes with exploding vaginas.

"Some of our songs are pretty deep, but we still keep the spirits light while you're thinking," says turntablist DJ Part Time (Jason Jakuszeit), a twentysomething who can open beers with his teeth and is a dead ringer for actor Michael Rappaport. "Think, but keep your head up."

This kind of dope-fueled duality isn't unprecedented. Funk legends Parliament Funkadelic made a name for themselves by blending raunchy come-ons and grown men in diapers with biting social commentary, delivered with a sly grin and a smack on the ass. As with George Clinton's crew, all Flo White's jokes would fall flat if the music weren't as tight as a well-rolled joint.

Which it is, as evidenced by the band's latest, Pearlescent, where bassists Retardobot (Chris Salkin) and Big Baby (Steel Farkas) lay down wide-screen grooves as drummer Slug (Dan Seese) and guitarist C.I.A.pe (Greg Reese) bob and weave around the bullying low end. Jakuszeit adds some deft scratching to the band's rubbery funk, which veers from hard rock to honky-tonk.

"I was a bicycle messenger," begins Stanley, recalling how he chose his moniker. "There was a woman I would get a package signed for every day, whose name was Florence White, and I would have to call that in. I'd ride around town, dropping packages off, going, 'I'm Flo White, I'm Flo White.' I always figured if I was ever going to be a rapper, I'd be Flo White, because I thought it would be a beautiful name."

With the exception of Farkas and Jakuszeit, all the band members went to high school together in Cleveland Heights. Stanley, a budding painter who's an ironworker by day, originally contacted Reese in 2000 about an art project he was working on dubbed Spaceflowers (a series of large acrylic paintings of futuristic plants done in retina-scorching greens and pinks, each with its own lengthy back story at www.spaceflowers.com). He wanted Reese to create music for the Spaceflowers website.

After Reese turned around a batch of tunes in just two days, Stanley dug his songs so much that he shared with him a series of dirty little limericks that he came up with while working the bar at the Basement, his former gig. Shitfaced, Stanley would belt out the X-rated ditties to his co-workers at the end of the night. Reese quickly came up with some more music, and the result was The Porpoise Project, Flo White's 2002 debut. the duo then recruited a band to flesh out its songs.

"We wrote half the album on a weekend of mushrooms," recalls Reese, an amateur filmmaker dressed in clothes speckled with paint. "We were just laughing, mostly. I remember both of us just laughing our asses off."

The laughter stops as the group heads to a practice session in Stanley's basement, a small cellar peppered with Miller High Life carcasses and cans of paint. Seese, a bearded dude in a flannel shirt, who looks like a stoned lumberjack, closes his eyes as he gets the band going with a crack of his snare. The economy-sized Farkas rocks to and fro as he lays down a big, growling bass line; Reese bends his knees and shakes his ass. Stanley hollers over the din, which is rooted in classic rock, with big sweaty riffs and a loud and proud oomph. It's some big, bad rock that, all smirking aside, this bunch clearly takes seriously.

"I want to get out of ironworking," Stanley says in a semi-sober moment. "I build bridges. I'm always getting burned. I smash my fingers a lot. I like the camaraderie of work, but man, it's just beating me up."

"That's all Neil seems to talk about: pussy and the global conspiracy," Reese chuckles. "A spoonful of pussy helps the truth go down."