When mail carriers go bad, it's not always in a hail of gunfire. 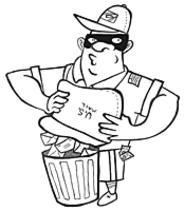 Pink envelopes were his prey.

Last August, a federal grand jury charged Kenneth Fortunato, a Newton Falls postal employee, with five counts of theft of mail. In each instance, Fortunato was alleged to have stolen a greeting card.

Later found guilty on one count, Fortunato was ordered to reimburse $707 to 19 card senders whose expressions of love and congratulations he had intercepted. The restitution order did not stipulate that he make amends with bank-crisp tens, twenties, and fifties.

Fortunato is not the typical mail thief. Most are civilian drug users, who steal in bulk. (Methamphetamine busts routinely dislodge sacks of stolen mail. Check-forging is something of a craft among the tweaker set, apparently.) On occasion, however, the thief wears an eagle on his shoulder. Though it happens infrequently, postal workers do palm greeting cards, short tills, and disregard the mail they are supposed to deliver. Their names appear in the basket of new indictments at the federal court-house from time to time -- wayward souls for whom "neither snow nor rain nor heat nor gloom of night" has lost all meaning. The post office has 750,000 career employees. Duties are bound to be abridged on even the sunniest of days.

Most misdeeds are prosaic. Postal clerk Keith Knarr of Elyria, for example, was accused last September of stealing about $1,700 from the branch where he worked. He pleaded guilty to a misdemeanor theft count and was placed on probation.

Other postal crimes run to the exotic. Technician James Coss was responsible for filling vending machines at Canton post offices. His scheme varied on what is known in casino parlance as the "Michigan bankroll," in which a putz hoping for star treatment wraps a $100 bill around a wad of singles. Coss dressed up coils of penny stamps to pass for larger denominations, thereby inflating his inventory to compensate for missing cash.

An audit eventually caught up with his trickery. Coss admitted to submitting fake reports to conceal $136,000 he had stolen. At his March sentencing, he was ordered to pay full restitution and serve a year in prison. Another postal technician in Northeast Ohio was indicted earlier this month on a similar charge.

And sometimes, mail carriers simply tire of carrying the mail. Every so often, an undelivered stash is discovered, as when West Side carrier Samuel Galarza's truck broke down. Galarza failed to remove an incriminating heap of advertising circulars before a mechanic gained access to his vehicle. "It looked like he had not delivered the mail for some time," says Assistant U.S. Attorney Tom Bauer, who prosecuted the case.

Galarza pleaded guilty to a misdemeanor count of delay of mail. At least he exercised discretion. Noncompliant carriers, inspectors say, are more likely to trash or disregard what we have come to view as "junk mail" -- out of respect for its big customers, the post office refers to such correspondence as "non-preferential" -- than bills and personal notes.

Inspectors also say that most letter dumpers are casual or temporary employees. One such worker, Darshawn Pritchett, was charged on suspicion that he trashed 233 pieces of mail last summer. Even under indictment, Pritchett flouts the mail system. The notice of his arraignment was returned to the courts: Pritchett had vacated his Central Avenue residence without leaving a forwarding address.

When a full-time employee neglects the mail, the carrier is usually angry at his boss, having trouble at home, or abusing alcohol or drugs, inspectors say. Fortunato -- the spoiler of children's birthdays -- was ordered at his sentencing to attend Gamblers Anonymous meetings, which would seem to explain a lot. "I really don't believe any of them start in the postal service with the intent of stealing," Pihoker says.

While the post office takes internal crimes seriously -- "If people aren't getting their mail, that's obviously a problem," Pihoker says -- a measure of compassion is reserved for errant sack hoisters. "It's tragic," says John Peet III, Cleveland's chief federal probation officer. "Most of the time, these people have blown a good job -- in most cases, the best job they will ever have."

Postal employees, Peet adds, face court punishments for misbehavior that, in the private sector, might result only in their firing. "These cases are very important for the post office for maintaining control over the employees -- just like the banking industry wants bank tellers prosecuted, because they need to set an example," Peet says.

Nationally, there were 348 internal mail-theft arrests in the last six-month reporting period, which ended in March. Inspectors initiated 233 embezzlement investigations.

A cost-cutting measure inspired the most significant employee heist in recent years. To minimize banking charges, the postal service began depositing branch receipts from centralized locations. (Previously, branches made their own deposits.) In 2001, a registry clerk in Phoenix crumbled before the temptation of consolidation. Louis Holley, a 28-year employee, made off with $3.2 million, when he slipped out of a collection facility with six bulging sacks. Inspectors captured Holley at a motel near Seattle, and he was sentenced to three and a half years in prison.

Of course, the most common postal crime is committed by the unsworn. Last year, the postal service asked citizens to return any plastic bins they might have appropriated for private use. Milk crates, it seems, are fast losing share in the purloined-personal-storage category. Postal officials said they could account for only 20,000 tubs, when 20 million had been purchased in the previous two years. The bins cost the post office $65 million.