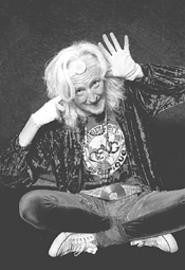 There's no such thing as a mistake for Daevid Allen.
"It's never stopped," he says via phone from a tour stop in New York. "I see it as a tradition that isn't dependent on one particular person. It's proven that, by surviving no matter what we do. It doesn't matter how much we reject it, it won't go away. It's been there for 32 years now. Gong is perfectionist and has a long tradition of musicianship and a particular type of attitude."

Allen's tie-dyed outfits and mystical ramblings are remnants of a particularly fertile era in the history of English rock. In 1967, at a festival called the Technicolour Dream, the U.K.'s answer to Woodstock, groups such as Tomorrow, Pink Floyd, Arthur Brown, the Pretty Things, and Creation played to a crowd of thousands, initiating a psychedelic movement that continues to exist today in a mutated form that includes ravers, acid casualties, and prog rock fans.

In the late '60s, before forming Gong, Allen, who is Australian, played in the Soft Machine, an English group that took its name from a novel by William S. Burroughs. Allen left the band just as it released its first album and started Gong in Paris with his wife, singer Gilli Smyth. After releasing its debut, the 1970 soundtrack Continental Circus, an album that Allen says was recorded in two days, Gong became part of the British psychedelic scene that not only attracted acid-dropping hippies but anyone interested in science fiction and ancient folklore.

To nurture that audience, Gong created its own mythology, which it dubbed Planet Gong (now the title of its website). This hypothetical world, populated by gnomes and pixies, was a place where true peace could exist, and Gong chronicled its happenings on a trilogy of albums that included Flying Teapot, Angel's Egg, and You. While the Tolkien-inspired concepts behind these records are rather farfetched, it was at this point that the band started to play the trance-like harmonies and fragmentary jazz melodies that would prefigure its interest in electronic music. Guitarist Steve Hillage and keyboardist Tim Blake joined the group and added a new dimension -- Hillage would later go on to play with electronic acts such as the Orb and System 7.

On From Zero to Infinity, a concept album of sorts that is only available as an import, Gong mixes an array of live instrumentation -- bamboo flute, doudouk, saxophones and guitars -- with electronic samples to create a jazz odyssey that sounds as contemporary as any of the Elephant 6 neo-hippie bands such as Apples in Stereo and Neutral Milk Hotel. Making references to imaginary characters such as Witch Yoni, Virtual Zero, and Professor Paradox, From Zero to Infinity is as strange and unusual as any of the band's previous albums -- suggesting that years of experimenting with psychedelic drugs haven't impaired Allen's creative impulses. Given the fact that most of Gong's music isn't entirely electronic, the connection between the space rock movement and the rave scene might be a tenuous one, but in England the lines between the two scenes have started to blur.

"The techno dance music scene in the U.K. has really embraced Gong as being a sort of spectacularly ancient ancestor," Allen says. "We get a lot of techno people in the audience and a big selection of 20-year-olds. Here, it's different -- you get some of it on the East Coast. It trickles through here and there, but not at the same levels, so we miss [the ravers], because they're the lifeblood. One of the problems with being in Gong is that you get serious students of prog rock who sit around and take notes in music books, which is okay. It doesn't exactly turn me on -- bless their hearts, I'm glad they're there -- but the juice comes from people who are dancing and getting into it."

In the late '70s, Allen moved to New York to work with avant-dub producer Bill Laswell and Shimmy Disc Records owner Kramer, a practitioner of experimental pop himself. After dabbling in electronic music, Allen moved back to England and rejoined Gong, undoubtedly taking some of his experiences in New York with him. He says that his son Orlando has started to experiment with Gong material in a way that brings out its techno impulses.

"He has taken Gong as his musical roots and made an enormous collage of all the music hovering in his self-conscious and made this massive piece of music," Allen says. "That's what's happening within the family of Gong. When he does it live, he uses two turntables and plays old Gong material."

One constant throughout the years of invented mythology, spaced-out jazz, and shifting lineups has been Gong's propensity for improvisation. The University of Errors, a band composed of Allen and members of the San Francisco group Mushroom, is so free-form that Allen doesn't even prepare for recording sessions. For the group's last album, e2=tenure, he simply stopped at the studio on his way home and rambled for two hours before catching a plane back to his home in Australia.

"The University of Errors is a group of friends who are into Gong, and we jam together," Allen explains. "Usually it's really tentative. I didn't listen back to the vocals I recorded. I just jumped on the plane and forgot about it. They sent me a mix and we thought, 'This sounds good. This is very promising. This is a band.' Then I thought about that saying of John Coltrane's -- 'There's no such thing as a mistake, only new ideas.' I figured University of Errors would be a fun idea, because everyone is so obsessed about perfectionism and getting it right. We thought it would be great to publicize the benefits of getting it wrong."

"I've got lots of pals around Cleveland," he says. "[Promoter] Jim Lasco came out and hung out at my house in Australia, so he's an old mate. It's like going to the family circle there in Cleveland."

Taylor estimates he's been part of the Gong "family" for 10 years. He and local keyboardist Steve Hayes played a show with Allen in April of last year at the Symposium, but he says he's not scheduled to perform at the Gong show at the Odeon.

"David is an innovator, and I like his musical sphere," says Taylor, who works in Cleveland as a painter, but has toured with Hawkwind when it played in Australia and New Zealand. "He's always open and has a unique presence that I find rewarding to play along with. Plus, he encourages other people's creativity. Some musicians are closed off, but he's open to experiments. His history is unbelievable."

Looking back on how times have changed since the days of Technicolor dreams and drug-induced stupors, Allen admits that rock and roll has lost some of its luster, in part because the market is saturated with so much mediocre music.

There's so much music," he says. "Everybody's making music, and there's a huge flood of music, only a portion of which is really original and interesting. I don't know how you do it -- how you find the gold in all the sludge." The list of musicians who, at one point or another, have played with Gong reads like a Who's Who of British space and psychedelic rock. Everyone from eccentric Soft Machine frontman Robert Wyatt to Spooky Tooth singer Gary Wright (known best as the guy who wrote "Dream Weaver") and synth-axe demon Allen Holdsworth have played with the U.K. act since its formation in 1968. For gray-haired singer Daevid Allan, a founding member who left Gong for a short period in the mid-'70s but rejoined it in 1988, its whimsical nature has contributed to its longevity.