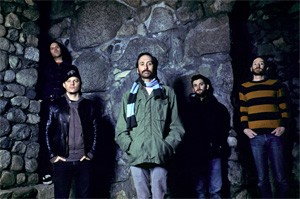 After splitting from Band of Horses, Grand Archives frontman Mat Brooke rounded up some friends to play languid songs that recall other more familiar songs, both old and new. Take Simon and Garfunkel's sweet harmonies, toss in some playfully light maraca shakes, and mix with occasional cello plucks, and you have a pretty good idea what Grand Archives sounds like. The Seattle group heads straight for the sun on its self-titled debut; cuts like "Miniature Birds" sprinkle breezy guitars, ringing bells, and flowing horn solos into the mix. So what if "Torn Blue Foam Couch" steals the intro from Crosby, Stills, Nash & Young's "Our House"? Or if the occasional whistling doesn't come close to Peter Bjorn & John's famous pucker-and-blow? Grand Archives just wants to hang out and take your mind off life's suckier moments. Nothing wrong with that.