SeaTac 67 has Seattle on its mind. 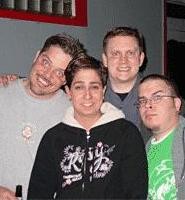 Guitars and gear spill into Jim and Carla Jadwisiak's living room as the members of their band, SeaTac 67, pull out cigarettes and curl up on couches. Carla, whose shirt reads "I Love My Fans," is in bright contrast to the rest of her bandmates, who opt for more sedate variations on the jeans and T-shirt theme. They joke among themselves as though they were family, which is mostly true -- Jim and Carla, the band's guitarists, are married, while Jim's brother, Mike Jadwisiak, plays bass.

"Carla wanted to learn how to play guitar and sing. I didn't have a guitar, so we went out and decided to buy two," says Jim. "We started writing our own songs. It took about two years before we were ready to play in front of anybody."

Even as the "odd man out," drummer Mike Fields is hardly an outsider. "We were tired of looking for a drummer, so we bought a drum kit so one of us could learn," says Jim. "I work with Mike, and we talked him into coming over and practicing." The result is a tight, solid group, whose hard edges are tempered by Carla's rich alto vocals.

SeaTac 67's sound is poised between punk and grunge -- fitting, since it was Kurt Cobain who inspired Carla to try her hand at singing and playing guitar. The band's name pays tribute to the rocker: "SeaTac" is the name of a Seattle suburb that is home to the Seattle-Tacoma International Airport, while "67" is a nod to the year of Cobain's birth.

"It was just going to be the name of a song, but then we just liked it," says Carla.

Nirvana's influence is felt most in SeaTac 67's lyrics, though shades of the Seattle trio are evident in the instrumentation too; think of the Pixies jamming with the Damned.

Carla, a full-fledged member of the band, prefers not to play out. Consequently, SeaTac 67 is an indie quartet on recordings and a pop-punk trio onstage.

But Carla is hoping to make one of the shows listed at the band's MySpace page, scheduled for New Year's in Rio de Janeiro.

"We were just hoping to take a vacation in Brazil and play acoustic guitars on the beach," says Jim.