Sportswriter Lebovitz has got lots and lots of game. 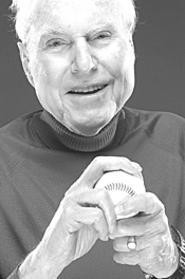 Hal Lebovitz has been writing about sports in Cleveland for more than 60 years. But unlike most of his peers, he's always shunned the idea of gathering his work for a book. "I've turned down lots of opportunities to collect my stuff," he says. Finally, his daughter broke him down. "She begged me to put down all the stories I told at the kitchen table." The Best of Hal Lebovitz assembles 90 of the Baseball Hall of Fame inductee's pieces (including profiles of Jim Brown, Bob Feller, and Ted Williams). Typically, Lebovitz didn't participate in the collection ("I told them I wanted nothing to do with the selections," he says), and typically, he complains about the contents ("They left some things out," he grumbles). But he's happy for the memories. "I traveled with the Browns in 1949 and from '50 to '60 with the Indians. They were winners, and they were great guys. I got to know them intimately. It's not like that today." Lebovitz signs copies of his book at 7 p.m. Tuesday at Joseph-Beth Booksellers, 24519 Cedar Road in Lyndhurst. Admission is free; call 216-691-7000. -- Michael Gallucci

The ink wasn't even dry on the bill of sale when Mike and Whitney Allen decided to change the name of the Willoughby bar they'd bought in December. That's why they're holding the Name the Bar and Own a Piece of It Contest. "New owners, new name, new everything," says manager Tara Smith. Customers jot down suggestions; once the Allens find an idea they like, they'll engrave the winner's name on a bar stool. "No one else is allowed to sit in it besides the winner, even if they're not here," Smith says. Since the Allens are fussy about the name, they won't settle on just any old moniker. They've even scrapped submissions like "Leather Unicorn." "That one really stuck out," Smith says. "But not for any good reason." The contest runs from 10:30 p.m. to 2:30 a.m. daily at Kickers Bar & Grill (for now), 38501 Lakeshore Boulevard in Willoughby. It's free; call 440-942-6520. -- Cris Glaser