A super-fly portrait of a gangster 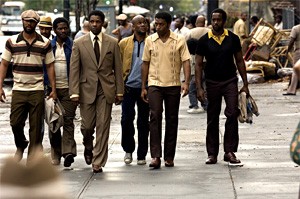 American Gangster, a would-be epic directed by Ridley Scott (Matchstick Men, Black Hawk Down), aspires to enshrine Harlem dope-king Frank Lucas in Hollywood heaven, heir to Scarface and the Godfather — or, as suggested by one writer, a real-life Superfly.

Ambitious as American Gangster is, it's well suited to Denzel Washington's particular star quality — the circumspect badass. Washington plays Lucas as a combination of ruthless thug and gentlemanly striver. His two sides are established in a murky opening sequence when, as factotum to old-school crime boss Bumpy Johnson, Lucas torches a guy in one shot and tosses Christmas turkeys to the crowd in the next.

It's 1968, and Bumpy is complaining that corporations are pushing out the middleman. He then drops dead, leaving Lucas to create a new empire — by eliminating the middleman. Rather than dealing with the mob, Lucas figures out a way to import high-grade heroin direct from Indochina. Then he takes Harlem by storm, selling smack that's twice as good for half the price, under the label Blue Magic.

American Gangster introduces a Lucas nemesis in the form of police detective Richie Roberts (Russell Crowe). As Lucas is a visionary, Roberts is a man of crazy integrity. Busting a bookie, he finds a car stuffed with unmarked bills and actually brings it in as evidence — causing his partner, soon to be revealed as a drooling junkie, to moan, "I'm a leper because I listened to you and turned in a million bucks."

The world, flush in smack and police corruption — such was disco-era New York. Still, for all of American Gangster's discreet period markers and cleverly cobbled-together locations, it doesn't get the period's putrid exhilaration — the sense of irreversible decay and giddy disorder.

The movie functions on parallel tracks: As Roberts recruits a posse of lowlife cops, Lucas brings his brothers up from North Carolina to help in the business. As the cop's marriage falls apart, the gangster treats his wife, Miss Puerto Rico 1970 (Lymari Nadal), and his mother (Ruby Dee) like queens. Both men are humiliated and threatened by the predatory animals of the NYPD's corrupt Special Investigations Unit. American Gangster and Honest Cop, each played by an Oscar-winning tough guy, finally converge when Roberts stakes out the Ali-Frazier fight and, spotting the self-effacing Lucas ringside, has to wonder: "Who the fuck is that guy?"

Who indeed? Lucas is self-made with a vengeance, a coldblooded killer and warmhearted family man in one package. It's one of the movie's running gags that nobody — certainly no white person, save Roberts — seems able to understand that Lucas actually works for himself. American Gangster more than makes its point regarding his entrepreneurial spirit. But Roberts is actually more enigmatic: What makes him so irrationally honest? Could it be the same thing that inspires Lucas? Late in the movie, the gangster dodges an assassin's bullet and waxes indignant: "I ain't running from nobody — this is America."

Marc Levin's current documentary, Mr. Untouchable, a portrait of Lucas' better-known rival Nicky Barnes, is like American Gangster in the way it presents its subject as a natural-born, all-American business genius. Barnes too brags about his professional operation and high-quality shit, dismissing Lucas and his family as rubes: "They acted country and they dressed country." The corresponding cameo in American Gangster is a mirror image: When Lucas discovers that Barnes (broadly played by Cuba Gooding Jr.) is slapping his Blue Magic brand on inferior smack, he confronts his competitor and, with all the indignation of an idealistic MBA, accuses him of "trademark infringement."

That's not the only grotesque irony to be found in American Gangster, although at 157 minutes, the movie is a tad leisurely in letting the audience in on Lucas' secret dope-smuggling method — a social metaphor that gives the notion "wrapped in the flag" a whole new meaning.