He Could Do Better

Guys, Your Game Could Use More Offense 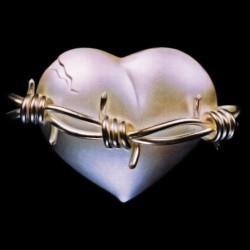 On VH1's The Pick up Artist, a creepy sexy dude, "Mystery," counsels nerdy guys on how to approach women. Three or four episodes in, I realized that I should kill my high-school guidance counselor for not bringing this career possibility to my attention. I should be the Pick Up Artist. I'd be way better than Mystery, whose advice always seems to be some variation on "relaxing" and "being yourself." Well duh. I could do that, and tell guys what girls are really like - and it ain't pretty. If some chick pulled the kind of crap on my little brother that I've seen some pull on male friends, bitch's hair weave would be on fire, and I'd be on the news.

Guys, listen carefully: Girls are predators. If you've been led to believe that we're all wilting flowers, treasures to behold, then welcome to real life. You are an easy mark for girls. We will push you and push you, try to own you, and then we will resent you for letting us. We'll interpret your indulgences as ass-kissing, and as a sage named Bueller once said, you can't respect someone who kisses your ass.

Don't believe me? Well, let's review. Have you ever been giving a girlfriend everything she could want, catering to her every whim, only to find yourself dumped without warning? Yeah? Well, I'm sorry to be the one to tell you this, but she was doing someone else or was planning on it. (That's not a girl thing; that's a human thing. Sudden break-up usually means there's someone else in the mix.)

If you let us, we will become spoiled children with our feet on the table, demanding candy for dinner. Don't stand for it. Mix it up a little, push back, go out when we wish you'd stay home. Nothing major. A little resistance goes a long way. Women need to feel challenged. Broads don't want a little brother. We want a real man.

And what, you ask, if she calls my bluff and breaks up with me? Could happen. And yeah, you might be crushed. I've been there. Remind yourself that you shouldn't waste your time on someone who doesn't really want you, brush off your lucky T-shirt and hit the town. Move on, or at least appear to. Fake it 'til you make it, son.

Do not try to win her back. No mix CDs, no candy or flower deliveries, no presents, not even for holidays. Just fucking don't. She won't be impressed; she'll be annoyed. Once she has peaced out, your hanging on will just feel like emotional blackmail and she will quickly lose any remaining respect for you. You need to Eternal Sunshine her, erase her from your life, like it never happened. Toss out every present, every picture, everything that she gave you, etc. Maybe it's just a little shoebox of memories; perhaps it's your whole apartment. It doesn't matter. Remove those tumors, and you will immediately feel better.

In new relationships, be wary of the string-along. This is where she calls you just to chat. Or you guys have a nice lunch somewhere. If this sounds like your "relationship," then dude, you are in the friend zone. But unless your name is Charlotte or Miranda, you are not required to do "girl talk." Not even if you're "upgraded" to beers with a bunch of her girlfriends out on the town. If you are not rewarded with at least a make-out after two or three drunken nights, this broad doesn't care about you. You are window-dressing, you're just a nice guy she feels comfortable around. If you find yourself crashing on her couch - alone - cut your losses and quit calling her back. You have enough buddies.

You're a swinging dude. Chicks should feel like they're fighting for time with you. If that's not true, act like it is. Don't immediately call her back, play a few more minutes of Halo and then sound like you can only talk for a second. (Does she know that you're on your friend's couch drinking Yoo-Hoo? Exactly.) And if you can, fake an illness. If she swoops in to take care of you, she's an instant keeper.

Do not interpret this as "tricking" or "lying." Please don't write in to whine about how you think I'm trivializing women, I'm not. Women are fundamentally hard to read and interpret. I'm merely providing a few slight pointers on how to make guys more available to women they deserve. We chicks today have careers, we have places we want to be and things we want to see. And sometimes we just want to party, unattached. But real women - the kind you'd want a long-term thing with - know that awesome boyfriends are like super expensive boots for free. You'd never pass them up. You'd toss all your other crappy boots and wear them with every outfit, because they're that amazing. Well, you get the idea. And it has nothing to do with $80 worth of candy on her windshield.