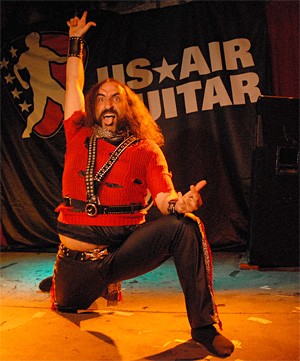 "Before signing them, I had friends with differing tastes in music listen to Heads Held High, and all of them liked the music," says Wood, a scene veteran who has played in Columbus HC bands Pitboss 2000 and For the Proud. "Another reason why we signed Heads Held High is their DIY ethic toward their music. Even after being signed, they're still promoting it themselves. The band has to care about the music and put in the work."

The deal is for one record. Crossface will distribute via indie stores all over the state, Interpunk.com, and download sites, including iTunes, Rhapsody, and Napster.

Heads Held High contributed a track to Crossface's upcoming Ohio Hardcore Comp. Vol. 1, which features 13 bands from all over the state.

Tentatively titled So Say We All, the band's first full-length CD (following a pair of EPs) is already in the pre-production stage. The group plans to cut tracks this summer with Solipsist frontman Noah Buchanan. They're aiming for a late-summer/early-fall release.

"After talking to Josh and a couple other people involved with the label, we felt we just had to sign with them," says frontman Elliott Frank. "I feel like their heads are in the place ours are, when it comes to hardcore."

The band plays Pirate's Cove (2083 1/2 East 21st Street, inside Peabody's) on Sunday, June 15. Later in the month, it leaves for a six-week tour, trekking from Indiana to Boston, with Cleveland's Run Riot opening.

• The End of the World as We Knew It makes its big-screen debut at 9:30 p.m. Saturday, June 14, at the Cleveland Cinematheque (11141 East Boulevard). The documentary traces the seven-year history of The End 107.9-FM, which, as Cleveland's premier alt-rock station during the '90s, helped break bands from Nine Inch Nails to Barenaked Ladies. Catch a trailer at www.myspace.com/1079_the_end. The documentary's producers plan to eventually release it on DVD, but can't until they receive legal clearance for all the music in the film. The movie features interviews with DJs and fans, including Rocco the Rock Dog, Pat the Producer, and others. A free after-party concert will follow the screening at Rockstar Cleveland (2083 1/2 East 21st Street, above Peabody's). The Spelling Bees and Bluto's Revenge will perform.

• The alt-rock veterans of Quickening have set a CD-release show for Friday, June 21, at the Grog Shop (2785 Euclid Heights Boulevard). The Cleveland band will be posting tracks from Crisis or Catharsis at www.myspace.com/quickening in the days leading up to the show.

• The Horror Convention Massacre 2 makes its DVD debut at the Roc Bar (1220 Old River Road, East Bank of the Flats) on Saturday, June 14. Produced in Cleveland, the indie horror flick stars Ari Lehman (Jason from Friday the 13th) and features an appearance by Uncle Scratch's Gospel Revival. The film will screen between performances by Kentucky's Rumble Club, Cleveland's Scarlet Fever, and the Sinema Sirens burlesque dancers. The party starts at 8 p.m.

• The Rock Hall (1100 Rock and Roll Boulevard) will screen The Other Side of the Mirror: Bob Dylan Live at the Newport Folk Festival on Wednesday, June 18, at 6:30 p.m. Following the film, director Murray Lerner will host a Q&A session and sign autographs. The event is free with RSVP; contact [email protected] or call 216-515-8426.