Don't Say a Word should take its own advice. 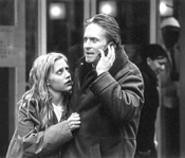 Lacking the good taste to postpone the release of this silly thriller until a less volatile time in American history (assuming one ever comes), the producers of Don't Say a Word have opted to foist upon us images of detonating New York City buildings, carefully calculated acts of violence, and even someone being buried alive. Nice.

Never mind that Oliver Platt spends a lot of his screen time in profile, forcing us to stare at his too-cool-for-school sideburns; this pedestrian stuff -- amid a rather routine plot and the usual cop-show stylings -- just doesn't add up to much in the way of entertainment value, regardless of the cultural climate. Besides, even if you happen to be seeking a cinematic hybrid consisting of a kidnapped kid (à la Ron Howard's Ransom) blended with a feisty female cop and yucky corpses (like The Bone Collector), punctuated by Michael Douglas pitching fits (you name it), you'd be better off just renting those movies. Or, for that matter, not.

The narrative itself is a model of simplicity, which could have given screenwriters Anthony Peckham and Patrick Smith Kelly plenty of latitude for experimentation in adapting Andrew Klavan's novel. Alas, these opportunities are steadfastly wasted. Instead, under the brusque and pushy direction of Gary Fleder (Kiss the Girls), the movie's dramatic course becomes an excuse for excesses of familiar and not particularly engrossing technique. Thank the sound crew for every tiny element -- flashbulbs, lantern filaments -- exploding onto the screen. Thank the lighting folks for blowing half the budget on indigo gel (literally, this is a blue movie). Thank the camera operator for spinning dizzily around every impassioned close-up and glycerin tear. Then thank your intrepid critics for enduring this stuff, so you don't have to.

Cloaked in his threadbare role of oppressed mensch fighting back, Douglas plays a Manhattan psychiatrist named Conrad whose cozy, yuppified existence is shaken to the core when his darling eight-year-old daughter, Jessie (sharp-eyed Skye McCole Bartusiak), is suddenly abducted. Since his much-younger wife, Aggie (Famke Janssen), is bedridden with a broken leg, and the cops cannot be alerted due to the extreme sensitivity of the circumstances, it's up to Conrad to meet the perpetrators' demands, to save his daughter, and to distract us from the production designer's daunting task of making Toronto look like New York on Thanksgiving.

The evildoers are a motley lot of rogue bandits representing assorted cultural stereotypes (jive-talkin' black dude, wallet-chain-swingin' redneck, etc.), under the guidance of a very mean honcho named Patrick Koster (Sean Bean, looking none too lean). Even though Koster displayed incredible psychic powers during a botched heist in 1991 -- striding into a bank vault and declaring, with nary a glance, that there are no security cameras inside -- he's got one doozie of a bee in his ski-mask upon his release from prison 10 years later. See, despite his prophetic gifts, he's unable to guess a special six-digit number that will lead him to a tiny piece of red glass masquerading as a diamond, and poor Dr. Conrad is unlucky enough to be the missing link.

Naturally, the mysterious number is contained in the mind of a wildly disturbed mental patient named Elisabeth (Brittany Murphy), who is either a genuine nutcase or the victim of too many Fiona Apple videos -- the doctors aren't sure which. Whatever the diagnosis, deep within the bowels of the Bridgeview Psychiatric Hospital, the young woman is kept locked away in a dark, dank cell that would depress a Komodo dragon. Desperate lest the seemingly catatonic girl be transferred to even worse conditions -- as if that were possible -- forensic psychiatrist Dr. Louis Sachs (Platt) decides to ruin Conrad's turkey day by summoning him to give the girl a whirl.

Of course, what nobody bargains for is that, when Elisabeth isn't affording us a trendy eyeful of navel or a lurid flash of panties, she's busily repressing horrendously painful memories of a trauma 10 years dormant, when she -- like crafty little Jessie -- was a mere tot of eight. Something ghastly happened to Elisabeth, and it's up to Conrad to find out what is was, just as it's up to us to sit through several sequences of grainy flashbacks concerning people running and yelling and chasing each other.

This is the main problem with Don't Say a Word, the glitch that throws its good intentions right off the track: With the exception of the beguiling Bartusiak, everyone has their emotional intensity stuck in high gear, delivering stilted histrionics instead of gripping performances. This is especially true of Jennifer Esposito as a raging detective, who's also saddled with unfortunate dialogue, such as "Do me a favor, Captain Bligh, just drive the friggin' boat!" With abrupt, whooshing bass rumbles in lieu of carefully crafted suspense, Fleder tries to take cheap shortcuts toward agitating us, and under his ham-fisted command, the actors simply struggle in vain to keep the action plausible. Scenes like Aggie's handicapped battle in the villains' lair (replete with laptop computers hilariously exploding into showers of sparks) and Conrad's final confrontation with Koster's gang (which turns mercilessly cruel) might have worked, with a bit of pacing or logic, but Fleder is interested only in adrenaline and payback, to the point of absurdity.

It also doesn't help that Douglas brings along all the baggage of being Douglas. Despite a long and successful career punctuated by turns of disarming poignancy (The War of the Roses) and blithe fun (Romancing the Stone), this guy can ruin a film when he's in self-important mode, as he is here. Granted, it must be tough to go through life as the ragman's grandson, the spawn of Spartacus, but the Demsky heir isn't exactly escaping his father's massive shadow by playing cutesy-pie at the beginning of this film -- nor by playing obdurate bastard at the end. In his retaliation, he wants us to accept the character as some sort of unyielding personification of justice, but what comes across instead seems peculiarly grisly and demented.

Murphy, on the other hand, could have held this thing together, had her character not been drawn so broadly and given so little to do. There are some compelling details accentuating Elisabeth's troubled psyche -- her ultra-high IQ, her gift for adopting other patients' neuroses -- but ultimately, she's here to shiver and shake and let Conrad save her. We know she'll prevail, just as we know that Bean's equally facile villain will take his fall.

This well-worn track is tricked out with a few oddities that draw us even further out of the story. Consider the film's genuinely strange antagonism toward minorities. While it's mildly annoying to witness the "token black" phenomenon in predominantly white movies, here the only two African American characters are substantially abused -- one beaten bloody and stabbed to death, the other unceremoniously pumped full of sedatives -- both actions courtesy of our "heroes." Even Esposito's cop goes down in pain. Only the Latina housekeeper escapes relatively unscathed, but she's obviously present simply to add relatability for a significant chunk of the moviegoing demographic.

This is by far the most troubling aspect of the movie -- its shamelessly formulaic design. Although there are reasons to like the villain (Koster declares his hatred for football) and to loathe the protagonist (witness Conrad ramming his Range Rover through traffic), there are many more elements thrown in simply -- even aggressively -- to hook the general viewing audience. By littering the movie with pop iconography and intermittent teases of sexuality, the filmmakers seem desperate to win and sustain our attention. But isn't that what the plot is for?

It takes brave and imaginative people to craft a modern thriller that thrills, a Silence of the Lambs, a Professional, a Sixth Sense. What we have here is a mad dash toward the obvious, in which the leads look irritated and the extras look tired. During the climax, when Koster lingers upon a detail to reflect, "Can you imagine what will happen if this is bullshit?" a thousand answers come to mind -- all of them more enticing than the pat mush that we actually get.