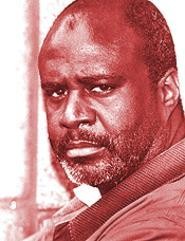 Before a packed house, William Watkins is beating his wife. He slams her to the floor and whales away, her screams drowning in the force of his blows.

"You need help," shouts a well-dressed spectator, unable to contain herself. "Why did she let herself get in a situation like this?" wonders another aloud.

For Better or For Worse, Clevelander Dwayne Williams's "slice of life" play, isn't theater for people who require silence from the peanut gallery. Making the unusual promise to "expose the subject of domestic violence in an alarmingly realistic fashion," it offers a ringside seat on a social malady that usually exists behind closed doors.

The doors open into the couple's apartment, a hot and stuffy box with flowering yellow wallpaper and an overstuffed couch that screams "Home Sweet Home." Sophia, the abused wife, enters the kitchen in her robe and slippers, the right side of her face black and blue. Shuffling and swollen, she looks like a broken-down hausfrau, not a social worker (which she is, though today she'll call in sick). William will attack her several times during the play, once in front of a visitor who's egging him on, and always in front of the audience -- a voyeuristic element that seems to make the beating even more humiliating.

Not everybody can stand the heat, leaving the theater before Sophia can leave Mr. No-Good. During a recent production of For Better or For Worse -- which has been staged at local theaters and shelters, and is now heading around the country on a "Stop the Violence Tour" -- the playwright noticed one ticket-holder tiptoeing out early.

"I said, "You don't like the production?'" recalls Williams, a 38-year-old gentle giant with an unassuming way of observing the world. "She said, "Well, I like it, I think a lot of people should see it, but it's too realistic for me. I just went through something like this, and I can't watch it.'

"She told me that the way she got away from her husband was he was in Vietnam, and he had a false leg, so she took the false leg. And when the police caught up with her, she said, "Look, I'm not going back. If you wanna have his leg, you give it to him.' She gave them the leg and kept on going."

She wasn't the only one affected by the play. After Nancy Olland, director of a rehab program for domestic abusers, read the script, she promptly cold-called Williams and asked if he'd like to work with men who'd been arrested for beating their partners. Short on volunteers, she wasn't above a little impromptu recruiting.

"We look for somebody who has an understanding of domestic violence, and his play indicated that he understood those dynamics," says Olland, noting that male facilitators are tough to find. "That when women are battered, it's not their fault. That alcohol or drugs are not the reason. That men choose to do it as a way of gaining power and control, and they don't need an excuse to do it."

That was three years ago. Now, Williams is the volunteer with the longest tenure in the program, Alternatives to Relationship Abuse, part of Templum House domestic violence crisis center. But at the time, he didn't feel like an expert.

"[Nancy] asked me if I was interested, and I said, "Well, to be honest with you, I'm really not,'" says Williams, who's been married 16 years and came from a peaceable family. "I interviewed one abuser, and he was just so arrogant. They said, "At least sit in on a session.'"

He agreed and found that he couldn't keep his mouth shut. "My first time, I had to be quiet, but I heard these guys say these ridiculous things. So I said, "Excuse me, I know I'm not supposed to say anything, and I apologize if I overstepped my boundaries, but how is this her fault? It seems to me, if you love someone, how could you do this to them?'" From then on, he was in.

Though one of Williams's sisters was quietly enduring an abusive relationship, it wasn't until he heard a co-worker's story that he was moved to write the play. Distraught and bruised when she came into work, the woman had been beaten by her husband when he found out she was pregnant.

"Her little son had a plastic sword, and he got between them and was trying to defend her," says Williams. "The husband hit the boy and said, "See what you made me do?' Then he kicked her in the stomach."

The seed for the play was watered when she let him interview her on tape. Pretty soon, other abuse victims heard about his project and came forward, wanting to contribute.

"Everyone has a story," says Williams, who always researches before he writes. "You'd be surprised at the number of people who will come up and tell you stories."

In all, the sometime Cleveland State English major conducted interviews with 30 victims and one abuser, an "extremely arrogant" guy who wanted to tell his hard-luck tale to the world.

"According to him, sometimes a man has to teach his wife a lesson," says Williams. "He was like "You know what I mean!' I was like "Actually, I don't know what you mean. My parents have been married over 45 years, and my father never beat my mother.'"

For the women, the constant was fear. "Not knowing whether you'd be murdered that night," says Williams. "They had gotten to the point where they feared they were going to be murdered. They didn't know what to expect, because the abuse had really gotten out of hand."

Unlike much of the do-good oeuvre, For Better or For Worse isn't stiff, although it's presented as a morality play. Like a classic abuser, it moves at an unpredictable yet consistently menacing pace, and the audience, in a sense, becomes the victim awaiting the next blow.

Unable to provide for his family, William's down in the dumps, so rather than take any job, he tries to get rich quick. His ticket to that unattainable marble bathroom with platinum faucets and a sunken tub: Big Red, a parasitic bookie with a pompadour, who giggles while William beats Sophia.

"Someone's gonna get killed," remarks Brenda Ferguson, attending the play with a friend from church. "It might be the daughter." In fact, the 15-year-old daughter, Becky -- her father's favorite -- doesn't get killed. But she is raped, thanks to her dad, who lets Big Red have his way with her in exchange for an extra day to pay off his debt.

The audience is mostly women, some of them laughing along with Big Red during the serious scenes. "I've been in that situation," says Cheryl Nelson, explaining where she finds the humor when Sophia shakily holds a gun on William. "That crap they're talking about, staying with your man -- my generation, they went through that."

No way would a father give up his daughter like William did, a few people say. But Candi Rose, who came to the play at the urging of her brother, a Cleveland cop, is not so sure.

"The way the father played the daughter, I've known that to happen," she says. "I've been in [a domestic violence] situation myself. I left my husband several times and came back, and it took my mother saying, "If you gonna stay, you stay. Don't leave until you know you not gonna come back'" to make a clean break. "Now I've become a licensed minister and teach domestic violence classes at the YMCA."

Williams, who has two daughters and a son of his own, says the rape incident, which he added to the play after the umpteenth revision, is partly symbolic.

"When you look at people who use their kids as pawns -- "If you leave me, I'm gonna take the kid' -- that's their way of getting back. Yeah, I see that all the time."

Among the men in rehab, says Williams, he's known as a hardass, and they sometimes try to finagle their way into a kinder, gentler group.

"I guess, as a writer, I've always responded to words, so I tend to get into the psychology of words, and why people choose the words they do," he says. "So when I'm talking to someone, and they make a statement, I'll ask them to clarify what they mean.'"

But Williams isn't unbending, having the empathy the domestic abusers program tries to instill in the men, Olland adds.

"I think he has the stamina for it, and I think that it takes a certain kind of stamina to be able to go up against that kind of resistance," she says. "He's hopeful also, and you need to be hopeful if you're doing that kind of work.'" Or listening to people tell their stories.