By Cris Glaser [email protected], Lucy McKernan and Diane Sofranec
What the #$*! Do We Know!? Loews Richmond Town Square Theater 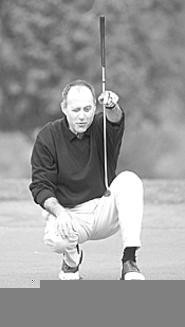 Even with 30 years of Saturday mornings on the golf links behind him, Mark McNulty has never aced a hole. "There's gotta be a first time," says McNulty, as he practices his shot at the Hole in One Challenge. Since late July, every golfer who pays a greens fee at the Cleveland Metroparks' Manakiki course has been given a coded ticket to the par-three, 155-yard seventh hole. At the tee, a pair of videocams are activated via a keypad. If the cameras catch a hole in one, the player wins $1,000. The pot sweetens if a golfer wants to pony up one to five bucks to win prizes, ranging from trips to Las Vegas and Florida to a two-year lease on a 2004 Hummer. But it's not easy. "The contour of the green's got a nice hill on the back, right side," says McNulty. "It's really pure luck." Get your game on dawn to dusk daily through December 24 at Manakiki Golf Course, 35501 Eddy Road in Willoughby. Fees are $24 for 18 holes, $14 for nine; call 440-942-2500. -- Cris Glaser

We may not have to worry about furious hurricanes in these parts, but last year's inaugural Nature's Bin Neighborhood Run didn't exactly come off without a severe-weather hitch. "With tornado warnings in the area, and rain and wind blowing, it would have been easy to stay home under the covers," recalls spokeswoman Mary Johnson. "But almost 100 brave runners came out." The second annual 5K and one-mile run and walk -- which starts and finishes at Lakewood Park -- takes place on Saturday. Awards will be presented to the top three males and females overall, as well as to the top three finishers in each age division. "We're hoping for blue skies," says an optimistic Johnson. Registration is at 8 a.m. at Lakewood Park, 14532 Lake Avenue in Lakewood; the race starts at 9. Entry fee is $25 for the 5K and $20 for the run and walk. Call 216-521-4600 for more info. -- Lucy McKernan

Run for the Money

Can ovarian cancer really be outrun? Terminal diseases can be swift and sneaky, but organizers behind Saturday's OROC (OutRun Ovarian Cancer) hope to at least get a jump on detection. The 5K run and walk begins and ends in front of the Cleveland Museum of Art (11150 East Boulevard) and winds through University Circle -- a symbolic location, chosen for its proximity to the various hospitals in the area. Proceeds go toward research. Tests are promising, but they "still need a five-year long-term study to see if they're effective," cautions spokeswoman Gretchen Nock. Registration begins at 7:30 a.m.; the run and walk start at 9 a.m. Entry fee is $20; call 440-915-5388. -- Diane Sofranec