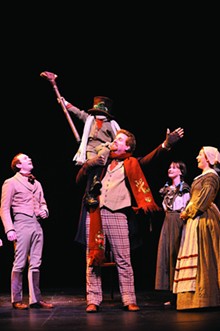 Holiday-themed plays abound in Cleveland, and this year there are new entries to add to the familiar classics: a redemption fable set in Cleveland, a modern retelling of the Nativity, and a visit by a touring Chinese troupe. Herewith, a guide to the best of the season onstage. — Pamela Zoslov

Charles Dickens was called "The Man Who Invented Christmas," which is not much of an exaggeration. The image of a traditional Christmas with snow, roast turkey, and family cheer, is largely derived from Dickens' 1843 A Christmas Carol. The redoubtable Great Lakes Theater's production of A Christmas Carol is itself a tradition: this season is its 24th in Cleveland. Director Sara Bruner adapts former GLT artistic director Gerald Freedman's story-within-a-story rendition, in which a Cleveland family gathers in its Victorian-era parlor on Christmas Eve to read Dickens' book about Scrooge, Bob Cratchit, and Tiny Tim, and the youngest child imagines familiar family and household faces as the book's characters. The play, starring Aled Davies in his fifth season as the Christmas-hating Scrooge, runs from Nov. 30 through Dec. 23 at the Hanna Theatre. For curtain times and tickets, go to playhousesquare.org or call 216-453-4453

The stage adaptation of author David Sedaris' humorous essay about his experiences working as a SantaLand Christmas elf at Macy's department store in 1989 has become a Cleveland holiday theater tradition for those who view the holiday with a more sardonic eye. This year's production, from Cleveland Public Theatre, features Allan Byrne as the unemployed actor/elf, and is directed by Eric Schmiedl. It runs from Nov. 28 through Dec. 22 at the 14th Street Theatre in Playhouse Square. For curtain times and tickets, go to playhousesquare.org or call 216-241-6000.

When China sends a show out on tour, it doesn't kid around. This one recaps 5,000 years of Chinese history with a full company of dancers, singers, and an orchestra that plays a captivating mix of traditional Chinese and modern Western instruments. Chinese productions are noted for their spectacular costumes and sets, and this one includes animated backdrops that take viewers from the snow-capped Himalayas to the cities of the Middle Kingdom. Two performances, on Dec. 22 & 23 at the State Theater, will add a dazzling international flair to your holidays.

In the 1930s, Karamu House, the interracial settlement that became a major center of African American arts, established a collaboration with its celebrated alumnus, Cleveland-born playwright Langston Hughes. Every holiday season the theater salutes Hughes with a performance of his Black Nativity, a retelling of the birth of Christ based on the gospel of St. Luke, with gospel music, spoken word, dance, and songs. This year's edition opens Dec. 7 and runs through Dec. 30. For tickets and performance times, check karamuhouse.org or call 216-432-7004.

A Carol for Cleveland

It's high time someone came up with a new holiday play for Cleveland. A Carol for Cleveland, playwright Eric Coble's adaptation of a novella by mystery writer Les Roberts, just may become an annual local favorite. It's a redemption story about a laid-off, down-on-his-luck steelworker from Pennsylvania who commits a bad act but gets a second chance in Cleveland. The world premiere play is being presented by the Cleveland Play House through Dec. 23 at the Allen Theatre. Go to playhousesquare.org or call 216-241-6000 for show times and tickets.

A Son Is Given

Cleveland choreographers Kenya Woods and Dianne McIntyre have created a new Nativity story, A Son Is Given: An Urban Ballet, a fusion of modern dance, ballet, hip-hop, jazz, comedy, and drama that tells the story of Jesus' birth in modern, urban terms. Produced by the New Community Bible Fellowship, the show will be performed on Dec. 21, 22 and 23 at the Hanna Theatre. For curtain times and tickets, go to playhousesquare.com or call 216-241-6000.