Welcome to the Dawg Pound, Chicago-style. 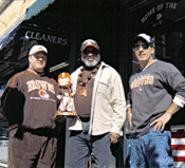 A Bears defensive back has just intercepted a Trent Dilfer pass. As he dashes through an obstacle course of Browns tacklers, the patrons of the Field House pub in Chicago go quiet and glower at the plasma screen.

"Get him!" barks one drinker.

"Kill him!" says another.

A guy on a barstool chuckles and says to his buddy: "This is the only bar in Chicago where you don't hear 'em cheering."

It's true. If there is a Bears fan in this bar, he's smart enough to shut up. The address might say Chicago, but this is Browns country. It's as if Dorothy's twister uprooted a Berea tavern and dropped it 300 miles to the west.

On every football Sunday, a handful of Ohio-bred Chicagoans who haven't kicked their Browns habit shuffle out here to get their fix, woofing in chorus with a few dozen other displaced fans. It ain't Cleveland, but for them, it's still Mecca.

When it opened in 1996, the Field House was just another cramped sports bar in a city full of them. The owner, Pat Maykut, served booze to Bears fans, but didn't share their passion. His love for the NFL died with the Browns.

It never had mattered that he grew up in a Chicago suburb. The Browns were in his blood; his mother had been born in Cleveland, and his father had acquired the habit while studying at Kent State. As a boy, Maykut rooted for the Browns at the old Municipal Stadium, hollering and chucking Milk-Bones in the original Dawg Pound. Even after the team bolted to Baltimore, Maykut kept the Sabbath, hanging Browns paraphernalia from the Field House walls, "so everybody knew," he says.

Of course, Maykut had aligned himself with a team that requires -- but only occasionally rewards -- its fans' faith. So in 1998, when Cleveland resurrected the franchise by building a stadium it could barely afford, Maykut anted up with his own risky investment: turning the Field House into a Chicago sanctuary for Cleveland transplants. He tacked up more burnt orange and brown, hanging a giant dog bone above the door and placing a sign in the window declaring the Field House the Browns' "official" home.

This left Maykut with just one dilemma: how to lure customers into a tiny pub to watch a blue-collar, out-of-town, losing football team -- a problem further complicated by the fact that his bar is located deep in the white-collar, yuppie heart of Chicago's Lincoln Park, a neighborhood too densely populated to be navigable by car.

Heroically, Maykut succeeded by applying the sort of logic that any diehard Dawg Pounder would appreciate: He offered cheap beer. Whatever one might pay in transportation costs is more than offset by $2 pints and $5 pitchers, rates that leave an erstwhile Cleveland barfly wondering whether he's discovered the westernmost outpost of McCarthy's Ale House.

The Field House occupies only a narrow sliver of real estate, about 80 feet long by 15 feet wide. The floor is covered in peanut shells that crunch beneath your feet like locust skins. Somehow, Maykut has found room for 14 high-definition TV screens. This being a United Nations of sports, there are dozens of flags -- just none promoting Chicago. There's even a tiny Baldwin-Wallace flag pinned to the ceiling, next to the royal blue flag of the Akron Zips. Maykut's decorative motif? "A basement," he says without hesitation. "Yeah, people tell me it's like a basement bar."

The bar attracts a peculiar breed of Browns fans. They are the sports equivalent of the odd creatures that populate the Galapagos Islands. Members of this long-lost tribe know all about the Browns, yet virtually nothing about modern-day Cleveland.

Andrea, a thirtysomething in cosmopolitan garb, comes to the Field House with her cheerful, cherub-faced boyfriend, Doug, who wears a heather-gray Browns sweatshirt. They claim expertise on the Cleveland bar scene, but Andrea names clubs in the Flats that closed a decade ago -- and she's never heard of the Warehouse District. All the same, she speaks vividly of her father's reaction to the Browns' move to Baltimore: "He called Art Modell a whore," she says. "I thought he would never say that in front of his baby."

George and Jay grew up in Garfield Heights and Solon, respectively, but they've been away from the homeland for a long time. They found the Field House by Googling "Browns Backers Chicago." "These are the most rabid fans in the country," says George, who has a salt-and-pepper beard and a stern visage, which clashes with the Browns bobblehead doll he carries as a talisman. Asked what brought him to Chicago, his friend Jay pauses a moment, his eyes glazing over, before he remembers that he came here for college and never moved back. His Browns allegiance is one of his only remaining links to the city of his youth.

Yet there's no doubting that these are hardcore fans. During the recent Browns game against the Packers, a graphic displaying a list of the last 13 Browns quarterbacks led to a collective shudder from a tableful of young St. Edward's alumni. "Thirteen bags of shit!" spits one fan, who would rather forget names like Testaverde and Couch.

And every Browns fan interviewed for this story gave a correct answer to the question: "Who did you root for after the Browns left town?" (The answer: "Nobody. I stopped watching football.")

Maykut is ebullient, if somewhat hoarse from barking. His Browns have dispatched the Bears, and with the record at 2-2, optimism hangs as thickly as the cigarette smoke. "Winning is good for business," Maykut beams. And for a moment, this bar is as drunk with victory as any that you'd find by driving east on I-90.