New to DVD this week 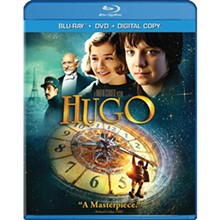 Two of last year's best films celebrated the movies themselves, and specifically their pioneering days. The Artist is a spot-on homage in silent black and white. Martin Scorsese's terrific family fantasy is a different kind of tribute: a wide-eyed view of the world seen from the eyes of a boy who lives inside a Paris train station. His adventures lead directly to one of the fathers of modern cinema, Georges Méliès, who opened up a universe of possibilities for directors like Scorsese more than 100 years ago. Watch Hugo on Blu-ray and lose yourself in a gorgeous history lesson that never fails to delight.

Answers to Nothing (Lionsgate)

Unfunny comedian Dane Cook and the woman who played Juliet on Lost star in this low-budget bomb that tries to pull together multiple storylines, just like in Crash. But all of their boring tales add up to a whole lotta, yep, nothing.I Melt With You (Magnolia)

Four fortysomething college pals (played by insufferable douchebags like Jeremy Piven and Rob Lowe) get together to talk about old times — and do lots of drugs and drink lots of booze. The big twist is kinda stupid.

Rowan Atkinson (Mr. Bean, as most of you know him) plays an incompetent spy in this sequel to a movie not too many people saw. Might be your thing if you think James Bond needs more groin shots.