I Want My IRS 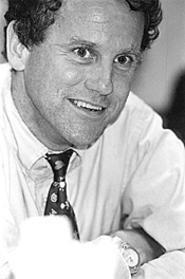 The money's gone and my wife is crying.

She waited a year for this $2,800. It was supposed to pay for new living-room furniture to replace the hand-me-downs and garage sale stuff that had been battered to death by time and kids.

Now, months after the money was to arrive, the old couch still glares at her.

It began with the hiring of a neighborhood guy to do our taxes. He is not a model of consumer confidence. His office appears to be a refuge for discarded pulp products, piles of huddled paper strewn everywhere, awaiting good homes. This is a guy who tells you your taxes will be ready tomorrow, only to call two weeks later to say it'll be another two weeks. But you cut him some slack. He's devoted his life to the compiling of numbers. That's gotta make you weird. Besides, he's cheap. So am I. This is my sin.

But last year he decided to direct-deposit our tax return into someone else's account. It was an honest mistake. Just filled in the wrong numbers. According to the IRS, it happens 20,000-30,000 times a year.

If normal people ran the banking system, this wouldn't be a problem. The conversation would go like this:

"Hey, pal, we dumped this schmuck's tax return into the wrong account. Can you gimme a hand?

"No problem," the banker would respond. "I'm on it right after I conclude my collectively bargained smoke break."

Such would be the ways of efficient and friendly commerce.

But my bank, which shall remain unnamed (NATIONAL CITY), isn't run by real people. Though its commercials invoke the words of Chrissie Hynde, reminding me that "I'm special, so special," I'm apparently not special enough to help. And since it wasn't their problem, they'd prefer that my wife get off the phone and stop bothering them.

So she calls the IRS. Here's how this works:

Call. They send a form. You fill out said form and wait. Call again. They say they can't help you. Call someone else. Repeat steps 1-5. Over and over and over.

This went on for five months. It seems that under tax laws, if you accidentally deposit a refund into someone else's account, you have no right to get it back. The IRS's final advice: You should sue your accountant.

This would be a good idea -- if we wished to go to hell. Unfortunately, it's a felony of the soul to settle a beef by hiring guys to hurl paperwork at each other. St. Peter wouldn't approve. Had the IRS offered more thoughtful advice, such as "Maybe you should firebomb National City," I would have said, "My, what wise counsel. By chance do you have old rags and gasoline I could borrow?"

This, St. Peter would approve. His boss had very definite thoughts about the usurers.

But my wife, who holds the intellectual property in our union, wasn't fond of either notion. She knew her husband to be a moron who couldn't even firebomb a tool shed. He'd conveniently leave his driver's license at the scene, which would inevitably lead to the loss of his paycheck, which would extinguish the sole asset he brought to said union.

And so she cried.

But we'd once read about a guy in Lorain. He'd organized bus trips to Canada so old people could buy affordable medicine. Certainly this was the sign of a good man, a big man, a guy with some juice. So we called Congressman Sherrod Brown.

Most government workers, especially in Cleveland, bring an I-can't-help-you-please-get-off-my-goddamned-phone flair to their work. But there is something remarkable about the people under Brown's employ: They actually seem interested in helping you. And so they did.

Initially, they presumed that National City would also be eager to help. But the bank takes its customer-service cues from the teachings of Pol Pot. Someone in Michigan responded with a very nice letter, which can be adequately condensed thus: "We wish to politely inform you to go fuck yourselves."

Brown, however, kept pushing. He banged on the IRS in Washington and its offices in Cleveland. Everyone put up blocks, returning fire with excuses and rules and all the armaments of government that prevent simple things from getting done.

My wife and I had run this same gauntlet. We'd been defeated by their bigger guns. But they couldn't ignore a congressman, especially one willing to stay on their ass for months on end.

Our file finally landed on the desk of Treasury agent Jim Sammon, a mild-mannered guy with a delightful touch of understated badass. He took it to a grand jury. Then he visited the people whose account our money had been sent to.

For nearly a year, they'd kept their mouths shut. They'd spent my wife's $2,800. Under the miracle of tax law, they had no obligation to pay it back. But they agreed to do so anyway. Sammon won't reveal his powers of persuasion, or say who they are. I wish he would. I'd like to thank this nice couple -- then firebomb their house.

There are many lessons to be learned here -- namely, my bank sucks, and it's better to stick your face in a lawnmower than deal with the government. But at least there's one elected official, Sherrod Brown, who's willing to reach out. Here in Ohio, that's a very rare thing. I'm pretty sure it's illegal.

But on this day, new furniture sits in my living room. And my wife isn't crying.