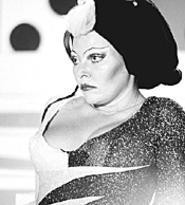 What do you get when you throw together Tattoo from Fantasy Island, Warhol cohort Susan Tyrrell, actors in blackface, and Danny Elfman's first stab at movie music? A fucked-up piece of cult moviemaking called Forbidden Zone. "I never saw the world larger than my own fishbowl," laughs director Richard Elfman (Danny's brother) about the 1980 film.

The story has something to do with a family's adventures in the Sixth Dimension, a land where Satan (portrayed by Danny) sings Cab Calloway and Hervé Villechaize is king. But it's all really just an excuse to showcase the music and stage show of the Elfmans' Mystic Knights of the Oingo Boingo (a forerunner of their rock band Oingo Boingo). "I really wanted to preserve what we were doing," says Richard. "I really had no commercial prospects for the film."

And don't get any ideas about the black-and-white photography. It has nothing to do with any sort of artsy-fartsiness. "We didn't have much money," explains Elfman. "And I still have trouble looking at some of it." A new print of Forbidden Zone screens at the Cleveland Cinematheque (11141 East Boulevard) at 7:30 p.m. Friday and 9:30 p.m. Saturday. Admission is $8; call 216-421-7450. -- Michael Gallucci

You'll have to forgive funnyman Rich Vos if he seems a little tired. "I'd rather have nap than have sex," he quips. Though divorced, he remains a devoted father, spending as much time as he can with his two girls, and it's not easy. His stand-up act keeps him on the road quite a bit. But comedy was his only career choice; he went onstage after "failing at everything else," he says. "I went up whenever I got the chance. I just kept doing it, and eventually I got a little better and a little better." Vos is best known for his stint on the first season of NBC's reality show Last Comic Standing. "Oh, yeah, network TV, national TV," he laughs. "It brought me to a different level." Vos is at the Improv (2000 Sycamore Street) Wednesday through March 20. Show times are 8 p.m. Wednesday, Thursday, and Sunday, and 8 and 10:15 p.m. Friday and Saturday. Tickets are $16, available by calling 216-696-4677. -- P.F. Wilson

African Cries
In the wake of tragedy, Ladysmith Black Mambazo moves on.

After a Ladysmith Black Mambazo show in Arizona last month, founder Joe Shabalala reflected on his wife's murder. While no one's been arrested for the ambush outside the couple's South African church in 2002, the group's latest CD, Raise Your Spirit Higher: Wenyukela (which recently won a Grammy), represents Shabalala's message of hope and unity in a troubled world. "In my flesh, I might be angry," he says. "I might cry. I might suspect somebody. Bad things happen, and the only thing to do is raise your spirit higher." Ladysmith Black Mambazo performs at 8 p.m. Friday at Cuyahoga Community College's Eastern Campus Performing Arts Center, 4250 Richmond Road in Highland Hills. Tickets are $15 to $25; call 216-241-6000. -- Cris Glaser

There are a lot of things going on at this weekend's Women's Expo: financial, nutrition, and fashion tips, vendors . . . even a rocket scientist! "I thought it would be a good idea to talk about the challenges and benefits of space exploration," says NASA's Marla E. Pérez-Davis. "It fits very well with vision goals." The expo happens 10 a.m. to 6 p.m. Saturday and 11 a.m. to 5 p.m. Sunday at the Cleveland Convention Center, 500 Lakeside Avenue. It's free; call 440-239-9200. -- Lucy McKernan