Prophecy is a holy mess. 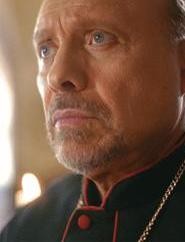 Hector Elizondo plays a sneaky pope.
Vast legions embrace the thing as gospel. Skeptics dismiss it as ecstatic nonsense. In any event, James Redfield's peculiar novel The Celestine Prophecy has been a bulwark of New Age metaphysics since it hit the bestseller lists back in 1993. By recent estimates, there are 14 million copies in print, and it has been translated into 40 languages. Take that, Da Vinci Code. Up yours, Harry Potter.

Now the long-awaited (and long-dreaded) movie version has arrived, and if nothing else, that means a lot of people who can recite the book's cherished "Nine Insights" like their ABCs will get another chance to tell the rest of us how they've unlocked the secrets of the universe. Hint: It's all about synchronicity and higher vibrations, evolutionary flow and eating your broccoli. Life's ultimate goal? "To energize our bodies, generation by generation, until we walk into a heaven we can finally see."

He may be blissed-out, but Redfield is one calculating fictioneer. Whatever else you might think of it, The Celestine Prophecy is a market-savvy fusion of religiously inclusive pop cosmology and pulp thrills, and the movie -- scripted by Redfield and Barnet Bain, and directed without much inspiration by a U.S. TV veteran, Armand Mastroianni -- dutifully follows suit. For those innocent of the phenomenon, here's a briefing: Deep in the rain forests of Peru, seekers of wisdom have discovered an ancient manuscript of uncertain provenance containing Nine Insights. Truth be told, this is some pretty vague stuff about fulfilling your dreams and achieving your destiny and not sticking your nose into other people's personal energy fields. But that doesn't keep the enemies of truth -- a devious Catholic bishop in a red silk beanie (Hector Elizondo), some corrupt military men, and a mysterious hit man (Jurgen Prochnow) -- from trying to suppress the sacred scrolls and thus deprive us all of imminent salvation.

Enter the hero, a young American named John Woodson (Matthew Settle), a dewy-eyed idealist who's just been fired from his job as a high school history teacher. Little matter. Before you can say pollo asado, John's on the next flight to Lima, simply because an acquaintance says he should go. Ten minutes after checking into his hotel, he runs into a priest who starts telling him about the Prophecy, and three minutes after that he's fleeing a squad of nasty Third World policia toting Russian-made machine guns. Hoofing it down a dark alley, our man's taken in by a good Samaritan named Wil (Thomas Kretschmann). The next morning, the two are off to the jungle on a voyage of self-discovery.

Abrupt? You bet. Improbable? Sure. But Redfield and company are nothing if not certain that coincidence equals fate and that self-awareness falls upon the willing like rain. Learn the Nine Insights and everything will be cool. Even if a civil war rages in Peru and the rebels are doing their best to steal your personal energy before shooting you dead.

This neatly packaged and highly dubious antidote to the world's ills obviously won't appeal to everyone -- least of all to those who recognize atrocious moviemaking when they see it. But if New Age rapture is your thing, you may love the insistent notion that if we all just follow our own highest intuition, personal conflict, war, and disease will simply vanish.