A wonky strain of metaphysics pervades Death Row in The Green Mile. 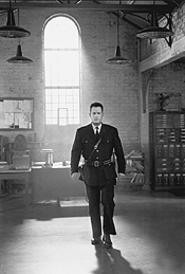 Tom Hanks as guard Paul Edgecomb.
Have you ever endured a relationship in which your partner beat you up mercilessly, just so he or she could "heal" you and play the redeemer later on? Granted, that's a weird question and perhaps one better explored via Akbar and Jeff in Matt Groening's Life in Hell strip, but it directly relates to the way Frank Darabont directs. In his much-heralded feature debut, The Shawshank Redemption, and now, more severely, in The Green Mile, Darabont wants to drag us through the madness of hell to show us the wondrous light of understanding at the other side.

Fortunately, he's pretty good at this, despite being a bit heavy-handed in his approach. Working within what source author Stephen King has dubbed "the world's smallest specialty -- Stephen King prison movies set in the past," Darabont has spent the last five years moving beyond the gritty lyricism of Shawshank to create what might be described as lyrical grit, almost a glowing Valentine to capital punishment, in The Green Mile. While both are movies about hope and justice cultivated behind bars, this latest offering is much more emotionally raw and intimate in scope.

"A man under strain can snap, hurt himself and others," explains head guard Paul Edgecomb (Tom Hanks) to his bratty and sadistic subordinate, Percy Wetmore (Doug Hutchison). "That's why our job is talking, not yelling." Edgecomb has his hands full, for Depression-era Death Row at Louisiana's Cold Mountain Penitentiary is housing four inmates preparing to walk "The Green Mile," a stretch of linoleum leading to the hideous chair that will violently burn their bodies away from their souls. Among the doomed are somber American Indian Arlen Bitterbuck (Graham Greene), maniac redneck William "Wild Bill" Wharton (Sam Rockwell), repentant Cajun Eduard "Del" Delacroix (Michael Jeter), and the mysterious focus of the narrative -- massive, towering John Coffey (Michael Clarke Duncan), a sweet-natured black man convicted of raping and murdering two little white girls.

Pain is the point for the first half of the movie, and Darabont dishes it out with zeal. Not only are Edgecomb and his assistant guards, Brutus "Brutal" Howell (David Morse) and Dean Stanton (Barry Pepper), forced to endure the misery of Percy's truly evil mischief, but Edgecomb is dealing (rather graphically) with his own physiological malaise, which is causing a bit of disappointment for him and his otherwise compliant wife, Jan (Bonnie Hunt). His senior citizen self (Dabbs Greer) -- who frames the movie in recollection to friend Elaine Connelly (Eve Brent) from a present-day nursing home -- recalls that, in 1935, he was suffering from the worst urinary infection of his life. Add in that Warden Hal Moores (James Cromwell) is dealing closely and personally with terminal cancer, and you've got a soufflé of suffering sure to rival the many such treats due out this holiday season.

But this is just what Darabont wants, because he's got a few mystical surprises up the tight sleeve he's tailored from King's cloth, and he needs a harsh contrast to work his magic. Once we see that Coffey is not only kindly but possessed of a supernatural gift for healing (he acts as a sort of indirect marital aid for Edgecomb and his wife), the value of his life -- and the ones he allegedly stole -- comes under close scrutiny, with only a few clues available to explain the strange inconsistency at hand. ("I couldn't help it, Boss," Coffey enigmatically explains to Edgecomb. "I tried to take it back, but it was too late.") As the day of reckoning draws nearer, Coffey's presence becomes somewhat messianic, and he swiftly channels negative and positive energy to targets his simple psyche deems appropriate. While the studio has made it abundantly clear that they would like the press to keep their lips zipped about the ending, any monkey could see what's up and, more or less, where it's going. The real message is the meditation along the way.

The character of Coffey may seem inventive or unique at first, but he's really just a new addition to a long line of noble savages long worshiped by Hollywood. King Kong, Frankenstein, the Incredible Hulk, the Iron Giant -- all big, benevolent monsters . . . until provoked. Coffey's twist is that he's also a bit like Powder or E.T. from their respective movies; he's a misunderstood outsider with a supernatural gift. One almost expects him to stick out a glowing finger and say "Owwwtch," but thankfully, Michael Clarke Duncan does incredible work beneath the role's somewhat low ceiling. His performance is haunting and likely to be remembered for a long time.

Hanks is present and focused in the lead, coming off, with his adopted accent, as a sort of stolid (and adult) Forrest Gump. His charisma holds the movie together, which is no mean feat, considering the intensity of many of the other roles, most notably Hutchison's loathsome turn as Percy and Rockwell as the equally sadistic Wild Bill. (Try to have sympathy for these devils. Just try.) It's a pressure cooker of rough masculinity, so there isn't really much for the women to do but serve as comforting set dressing, though Patricia Clarkson, as the warden's wife, gets to have some brief fun with Tourette's syndrome. Graham Greene is dignified and powerful, but wasted in a tiny, inconsequential role. Jeter is superb as always, as a man spending his last days on earth with a mouse as his closest friend. And Harry Dean Stanton and Gary Sinise enhance the story with their small but central parts.

The Green Mile is a loud and ghastly movie to sit through and not short on gratuitous hideousness, but Darabont has also done his best to baste it with humanity and sweetness. For every kicked scrotum or broken finger, there's a field of fireflies or some warm cornbread. He's continually poised with his spoonful of sugar, but the medicine he forces upon us is perhaps a little bit too severe to get down.