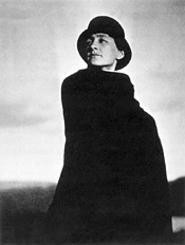 A few years ago, literary critic Phyllis Rose wrote a book called Parallel Lives, in which she dissected five (mostly unhappy) marriages between writers during the Victorian era. Rose started from the premise that every marriage is actually composed of two marriages -- the man's and the woman's -- with each half of the pair experiencing reality in a different way. It might be worthwhile to keep Rose's characterization in mind when viewing the Cleveland Museum of Art exhibit The Model Wife, because in it we are given only the male perspective. We don't always know what the subjects themselves felt about the results.

However, the nine photographers represented found a way to accurately and fairly document their spouses' lives, by taking so many pictures that inevitably any biases they had would become transparent to the viewer. By doing so, they achieved a richer portrait than, say, a 17th-century portrait painter who would have been concerned with distilling the essence of his subject into a single image.

In this exhibit, the 147 photographs are not concerned with distillation. Instead, they are unflinchingly honest. They chart, in detail, the progression of several intimate relationships -- from courtship all the way to divorce (in Alfred Stieglitz's and Edward Weston's cases) or, in the instance of Japanese journalist and photographer Seiichi Furuya, his wife's gradual descent into severe depression and finally suicide. In Furuya's photographs, the viewer is witness to the disintegration of a human being. Offsetting the bleak mood of this intensely disturbing series are others that tell altogether happier stories. Nicholas Nixon's work, for instance, has a casual, spontaneous feel, as it records his wife's interaction with the couple's children and her relationship with her sisters. The photographs have an appealing directness, and Nixon is attentive to details that furnish clues to his subject's inner life.

Unlike Nixon, who specializes in finding the drama in everyday life, 20th-century photographic pioneer Alfred Stieglitz created drama that transcended the everyday.

If viewed separately, his stylized portraits would give a skewed impression of his wife, painter Georgia O'Keeffe. But together, a more complete picture emerges. For instance, in one photo he focuses attention on her genitalia and breasts, to the total exclusion of her face. To view such a photo in isolation -- as disconnected from the approximately 25 others that show the artist clothed and in full face -- would misrepresent both O'Keeffe and Stieglitz's feelings about her. The same might be said of the 1920 photograph of an imperious O'Keeffe draped in a black cape and set against an early evening sky. This, like the nude shot, is but one aspect of her. Context is key.

Edward Weston's photographs are also among the most distinguished here. Weston is well-known for his close-ups of nautilus shells and green peppers -- works that are not merely virtuosic explorations of texture and light, but also expressions of joy, sorrow, wonder, and mischief. He also took extraordinary photographs of his wife, Charis Wilson. Several of these are on display, including shots from 1936 in which Wilson is photographed nude among sand dunes in California. This series raises the question: Is Wilson being viewed by Weston merely as a sensual object? No, because photography, a medium well-suited to capturing the details of the world with precision, was here taken to a new place. Along with the expected specificity, there is a sense of timelessness in these nudes. The sun-parched sandy landscape is harmonized with the woman's body -- smoothness of a different kind. As with some of the other works in this exhibit, being aware of the biographical subtext of these photos is not necessary to appreciate their power as works of art.

(If the viewer has any lingering doubts that Wilson was a willing model, curator Arthur Ollman answers them in an essay in the copiously illustrated catalog. He informs us that the shots were taken in response to a spontaneous gesture by Wilson. "She pulled off her clothes and playfully tumbled down the steep sand. He quickly turned his camera on her and produced the exquisite series of nudes.")

The Model Wife presents a selection of outstanding photography and approaches a complex subject in a measured and non-gimmicky way. If you haven't seen it already, now is definitely the time. Those interested in gender and what Phyllis Rose calls "the shifting tides of power between a man and a woman joined, presumably, for life" will find much food for thought.