Westlake's ode to the Emerald Isle is a strip-mall gem indeed. 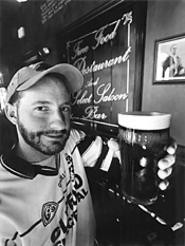 From the outside, Brendan O'Neill's looks like every other suburban storefront. Faced in tawny brick and plopped down on the easternmost edge of Westbay Plaza, the restaurant/pub is indistinguishable from the next-door Radio Shack or the nearby phone store.

Likely, this dreary outer conformity is a large part of what makes it such a pleasure to cross Brendan O'Neill's threshold and soak up its visual charms. While Westlake is no more the Emerald Isle than Cleveland is Paris, the restaurant's interior (designed and built in Ireland) does a commendable job of invoking the spirit of the Ol' Sod. Essentially a large, cavernous rectangle, the dining room has been cleverly subdivided into a multileveled series of cozy nooks and crannies, each stuffed with sturdy wooden tables and well-padded chairs that seem to invite lingering. Even at midday, amber light drifts down from an impressive array of mismatched vintage ceiling fixtures, and the dark woodwork, leaded glass, and richly textured red walls are warmly embracing. The rustic appeal is completed by the addition of a fireplace, fanciful imported bric-a-brac, and pithy Irish homilies scripted onto ceiling and walls.

The pub opened in November and is the third link in a small but growing national chain. (The two other locations are in Boulder, Colorado, and Ann Arbor, Michigan, and go by the name Conor O'Neill's.) In Westlake, the large lunch and dinner menus are implemented by chef Anthony Malone, whose kitchen compositions include generously sized appetizers, soups, salads, and traditional fare like Irish stew and shepherd's pie; several meatless dishes, including boxty, are also available. The weekday lunch menu is augmented by a selection of more than a dozen sandwiches; at dinner, a handful of steaks, chops, and chicken dishes moves to the fore. (The restaurant also serves an abbreviated late-night menu from 11 p.m. to 2 a.m. daily.)

For stout-hearted diners, it doesn't get much better than the bounteous Donegal Fry, an "anytime" breakfast of eggs, deep-fried potatoes, grilled tomato slices, brown bread, butter, jam, and an assortment of Irish-style meats. There were broad, thinly sliced slabs of pink Irish bacon, all savory and moist; long, fat bangers (made from ground pork and bread crumbs), lean, well done, and with a slightly crisp casing; and thick rounds of the euphemistically named black and white "puddings." In the latter, the black is a crumbly, fine-textured sausage made from fresh blood mixed with cooked barley, onions, cubed back fat, oatmeal, and an assertive, secret blend of cloves and other spices, and the white is a softer, moister sausage, with a texture rather like turkey stuffing, made from pork meat, onions, oatmeal, sage, and other aromatics. Washed down with a frosty pint, it was food so manly and protein-packed, we felt like going out and finding a roof to thatch.

The pub's focal point is its spacious circular bar -- one side done up in high Victorian style, with ornate woodwork and frosted mirrors, and the other side plainer and more suited to serious drinking. The bar reportedly stocks around 14 types of beer on draft (served in 22-ounce Imperial pints) and another 8 by the bottle, as well as a collection of top-shelf Irish whiskeys. Too bad, then, that servers seemed to have only cursory knowledge of the offerings, and management had neglected to commit the beer list to paper (although, curiously, diners are provided with a small menu of moderately priced wines). As a result, during a dinner visit when our particular nook precluded a view of the bar, deciding on a brew became much like a game of Twenty Questions.

Us: "Do you have Carlsberg?"

Us: "Well, do you have Boddingtons?"

Us: "Okay then, do you have Tennants?"

Although the absence of a beer list was our biggest gripe, it was one of several ways that service faltered. For instance, during an early-evening dinner visit, well before the Saturday-night crowd arrived, courses came out of the kitchen so fast that we momentarily had appetizers, salads, and entrées stacked up on the table simultaneously. Our server then compounded our sense of being rushed by pestering us to decide on desserts while we were still working on our main dishes. So much for feeling free to dawdle over coffee on those thickly padded seats.

We also found several discrepancies between the menu prices and the prices recorded on our dinner check; three were small overcharges, and one was a slight undercharge, so check your bill carefully before opening your wallet. And considering all the other amenities the proprietors imported from Ireland, we wish they had shipped in some thick Irish linen to replace the flimsy paper napkins.

Despite the rough spots, much of the food was tasty and well prepared. Starters, especially, were nicely handled. Homemade potato-and-leek soup was thick, chunky, and subtly seasoned with bits of Irish bacon and dill. Steamed Galway Bay mussels, available as either an appetizer or entrée, were fresh, tender, and served in a creamy bath of mustard, garlic, and sherry. And a four-ounce wheel of deep-fried brie had a marvelously crisp beer-batter coating; a thick, raisin-studded peach chutney provided a sweet and fruity counterpoint.

Salads were also commendable, with impeccable greens smothered by tasty add-ons like diced Roma tomato, red onion, carrot, and dried cranberries (O'Neill's House Salad); mandarin oranges, scallions, dried cranberries, and almonds (County Down Salad); and our favorite, the Golden Vale Salad, with sun-dried tomatoes, black olives, chopped scallions, hard-boiled egg wedges, and crumbled blue cheese. Smooth, understated Guinness honey-mustard dressing, served on the side, was a perfect accompaniment. The goodie-filled salads are available as main courses (at around $7) or, even better, as amply apportioned side dishes, with any entrée, for a bargain-priced $2.25; for the cost and quality, they put to shame the house salads at many far more expensive area restaurants.

Among the Irish fare, any flaws were generally minor. Fish and chips -- pearly filets of cod in a Bass Ale batter, along with average french fries -- were good, although the filets could have used a bit more time in the deep fryer to finish crisping the crust. The kitchen wasn't stingy with the tender corned beef and cabbage that it draped over an order of boxty, a thick potato pancake; unfortunately, it hadn't held back, either, on the salt in the pancake. And Irish stew -- lamb, carrots, parsnips, celery, and red-skinned potatoes in smooth Guinness gravy -- was a little light on the lamb and had a vague but off-putting metallic aftertaste.

The pleasing variety of desserts was enough to halt any grumbling, however. A slim wedge of commercially prepared Bailey's Irish Cream Cheesecake, drizzled with chocolate sauce and flounced with whipped cream, was rich and mellow. A massive sundae of dense, lustrous Guinness-flavored ice cream (made by nearby Mitchell's Homemade Ice Cream), with chocolate fudge sauce, butterscotch, pecans, whipped cream, and a cherry on top, was a true guilty pleasure. And a warm strawberry-and-rhubarb crumble, finished with two scoops of Mitchell's vanilla ice cream, had plenty of sweet-tart flavor and just the right amount of properly crunchy oatmeal-and-brown sugar topping.

Of course, no Irish pub is complete without music, and Brendan O'Neill's hosts both local and regional Irish bands nearly every Saturday night. Even better, in honor of St. Patrick's Day, the pub will feature live music in the evening on Thursday, March 14, and Friday, March 15, as well as all day that Saturday; on the big day itself (Sunday, March 17), the music and dancing go from noon until midnight. Grab a pint and try to keep up.