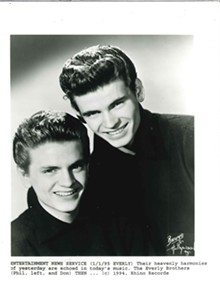 The Everly Brothers never became as popular as pioneering rock acts such as Elvis Presley, Chuck Berry or Jerry Lee Lewis. But like Presley, Berry and Lewis, they were inducted into the Rock and Roll Hall of Fame and Museum in 1986 as members of the very first class. Known for their pristine vocal harmonies and a keen ability to blend country and rock impulses, Don and the late Phil Everly have had a far-reaching influence on rock and pop music. They’re the subject of this year’s Music Masters Series, the annual Rock and Roll Hall of Fame and Museum event that honors a Rock Hall inductee with a series of workshops and a tribute concert.

“The Everly Brothers are one of those artists who are always in our minds,” says Rock and Roll Hall of Fame and Museum’s vice president of education and public programs Lauren Onkey when asked about what made the museum pick them as the subject for this year’s event. “We were moved after Phil [Everly] passed away. There was an incredible outpouring of artists who talked about their incredible influence. I was also thinking about those three tribute records came out last year with Billie Joe and Norah Jones, the Bonnie Prince Billy and Dawn McCarthy. The Chapin Sisters put out one too. They’re influencing Americana now. Thinking about their influence pushed them over the top. We’ve always though about them as a possibility. When we think about the history of the program, it’s been a few years since we explored something that came out on the country side, so it’s good to be back there in terms of the scope of the program.”

Phil Everly passed away in January, just before his 75th birthday and this concert will mark the first public tribute in which Don Everly has participated since Phil's death. The event will also aim to create awareness about chronic obstructive pulmonary disease, the cause of Phil Everly’s death. Even though Don Everly has stayed out of the spotlight since his brother’s death, he supported the Music Masters Series tribute from the beginning.

“When we proposed the idea late in the spring, [Don Everly] agreed right away to give his blessing and to be here,” says Onkey, adding that Everly will be attending but not performing. “Music Masters is about trying to convey the story of the honoree to people who know them and to people who never heard of them. I make this joke that no one calls and complains about the artists we honor. These are the kinds of artists that everyone agrees are the cornerstone of the music.”

Though the brothers identified with country music, their early hits such as “Bye Bye Love,” “Wake Up Little Susie” and “All I Have to Do Is Dream” became hits on both the country and pop charts. They had crossover appeal since the beginning.

“They brought this close harmony out of Kentucky and Appalachian music to rock ’n’ roll,” says Onkey of the duo that started its career by working with Chet Atkins in Nashville in the ’50s. “They were the first one that brought that sound. The other guys like Elvis or Jerry Lee were mixed more with R&B. They last beyond that first big bang of rock ’n’ roll. They emerge in early ’57 and their hits last into the early ’60s. They extend out and there’s nobody else in that first explosion whose career extends out in that way.

The British Invasion doesn’t happen without them. You hear a Beatles record and they’re right at the core of it.”

British guitarist Albert Lee was certainly struck by the duo when he first heard them. Lee, who met them in a London club in 1962 and served as the musical director of the Every Brothers’ 1983 reunion, is canceling a few tour dates so he can fly into town and sit in with the house band performing at the tribute concert.

“I was first and foremost a rock ’n’ roll fan,” says Lee, who first became associated with the Everlys in the early ’60s. “But I liked a lot of the country music I was hearing too. We didn’t hear a lot of that in the UK. The way they did their rock ’n’ roll, it was country-influenced. It struck the right note with me. I liked the great harmonies and the great backings. Chet Atkins was the arranger on a lot of that stuff. Don’s great rhythm guitar playing and some of the hooks on the big hits got everybody’s attention. Great playing. Great singing. That sibling harmony always works. It’s sung together all their lives. They instinctively knew where each one would be going. Phil stuck to Don like glue. It’s hard to replicate that. It takes years of working together.”

The Music Masters Series includes a week of events that lead up to the tribute concert. At 7 p.m. on Tuesday, Oct. 21, at the Black Box Theatre of the Tommy LiPuma Center for Creative Arts of the Cuyahoga Community College, Michael Kosser, the author of How Nashville Became Music City U.S.A., will talk about the Nashville music scene and the Everly Brothers' connection to it. At 8 p.m. on Wednesday, October 22, in the Rock Hall’s Foster Theater, Rodney Crowell, Albert Lee and Peter Asher will participate in a Songwriters to Soundmen program. At 7 p.m. on Thursday, October 23, at Case Western Reserve University’s Wolstein Auditorium, critic Ann Powers will give the keynote speech “Brand New Heartache: The Everly Brothers and the Exquisite Reveal of the American Teen Heart.” And from 10:30 a.m. to 3:30 p.m. on Saturday, October 25, the Annual Music Masters Conference will take place in the Rock and Roll Hall of Fame’s Foster Theater.

“There will be duets all night,” Onkey says. “Some that you anticipate but others will be paired up in fun and cool ways. We think the night will be moving really well. The artists are really excited to sing this music. Once you start with something like this, you learn the whole catalog and you just want to keep adding songs. This is really exciting.”

Jump to comments (1)
« The History of Violence: Punk Singer Turned Pundit Henry Rollins Turns his Attention to the Latest Political Blunders in the Middle East   |   Heavy Hitters: Pallbearer Emphasizes its Psychedelic Side on its New Album »