Jesus Gets a Makeover

How the Fine Arts Assocation updated a biblical warhorse. 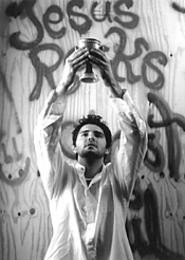 Fabio Polanco has modernized Jesus Christ Superstar for the Fine Arts Association's upcoming production. "We're having the show take place in the present time," he says of the 30-year-old musical, a relic of the hippie era. "I wanted to find places where I can connect elements of the story to our contemporary lives." Polanco says some of the original staging techniques -- like scenic design -- are retained, but, as director, "I wanted to tie locations in the Holy Land to locations in our American lives. I want to make this feel more accessible and make it have the meaning it can have right now. We're going through the same problems right now, and we're asking the same questions they asked." Jesus Christ Superstar is at the Corning Auditorium (38660 Mentor Avenue in Willoughby). Showtimes are 8 p.m. Friday and Saturday and 2 p.m. Sunday through June 29. Tickets are $16 and $17. Call 440-951-6637 for more information. -- Michael Gallucci

Boston's Favorite Atomic Hero bears many of the region's '80s and '90s post-punk earmarks: buzzing guitars (just like the Pixies), crunchy riffs (just like Buffalo Tom), and an affinity for noise (just like Helium). The band's second album -- Who Will Save You Now? -- is a little too familiar with modern rock conventions, but once the quartet latches onto a groove, it refuses to let go. Favorite Atomic Hero -- with Three Miles Out and Twin Cam -- is at the Lime Spider (207 South Main Street in Akron) at 9:30 p.m. Friday. Tickets are $5 and $10. Call 866-468-3401 for more information. -- Michael Gallucci

Best Use of Dirty French

Patti LaBelle solidified her place in music history 29 years ago when she asked, "Voulez-vous couchez avec moi ce soir?" Neither time nor misunderstood lyrics -- not even a lame remake by Christina Aguilera, Lil' Kim, Mya, and Pink -- have dampened the cultural impact of LaBelle's "Lady Marmalade." It remains the cornerstone of LaBelle's career and the best-ever use of a dirty French phrase in a pop song. Of course, LaBelle has done more. She's a bona fide diva, with the wardrobe, attitude, and huge voice to prove it. And she's always entertaining onstage -- witty, charismatic, and bigger than life. She's in town Sunday with Frankie Beverly and Maze, whose slinky R&B hasn't aged a bit over the past 25 years. Showtime is 7 p.m. at Tower City Amphitheater (351 Canal Road). Tickets range from $25 to $75; call 216-241-5555. -- Michael Gallucci