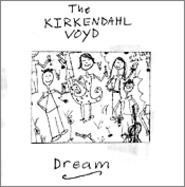 After dropping an album of ghoulish garage rock with 2001's Graveyard A-Go-Go, Kirkendahl Voyd sounds as if it's been scared straight. On its shape-shifting new album, Dream, the three-piece band tones down the evil eccentricities in favor of more soothing sounds. Kirkendahl Voyd signals its intentions from the outset with "It's Over," an affecting piano-laced number with vocals by Chloe Nightingale that are as welcoming as a warm bath. Twinkling chimes and crashing waves of synth open "Softly, Slowly Away," a romantic reverie that's eventually broken by peals of squealing sax. "Muffy's on Prozac" is just as grand and disarming, with towering keys and Nightingale's galvanized coos.

Of course, Kirkendahl Voyd still likes to hear you scream. "I intend to fuck with your head" bassist-vocalist Mark Ireland sings on "Torment," an ominous stomper with arcing guitar and robotic vocals. "I Dance With the Dead" is equally antagonistic -- a dirty, bass-driven waltz, enlivened by cowbell and handclaps; it warrants some applause of our own.