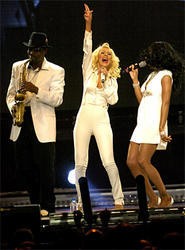 Stocked with three generations of Cleveland rockers, Bedford's new Galahad Recording Studios is also the base of operations for a new record label, Galahad Records.

"With the right support and the right business minds, we can move Cleveland music forward," says co-owner Patrick Lally. "Growing up in this town, I've seen a lot of great bands that haven't been supported well. Now, I think the chances of catching lightning in a bottle here are as good as anywhere else. We will break somebody."

Lally has an impressive business and music résumé. In the '80s, he played in various bands on the East Side scene, then left town as a roadie for INXS. Later, a two-week stint at his family's Lally Chevrolet dealership stretched into a 22-year career. But he continued attending shows and practicing his bass. And after divesting of the car business, Lally decided to make a go at music full-time.

Lally and partner Vincent Vartorella studied studios all over the world, including recording facilities owned by Peter Gabriel and David Gilmour. Based on Los Angeles' Record Plant, the three-studio Galahad facility runs on a six-person staff that includes Wilbur Krebs (a Clevelander who's returned after a distinguished stint in San Francisco, where he moved in circles with Green Day and RatDog), Beyond Fear/13 Faces/Law of Destruction guitarist John Comprix, Dead in London singer-guitarist Brett Moore, and Chief Engineer James Wise. The studio is stocked with digital and analog equipment, and has a full selection of instruments.

Lally isn't ready to announce the label's acts yet, but he's looking at several local groups.

"We're trying to help musicians," says Comprix. "I know what it's like. We want to have a musicians' environment that's comfortable and affordable, where you can get a great album."

" The new Soulless album, Forever Defiant, is running late, but it's getting closer. The black-thrash disc has been mastered, and art is nearly finished. It will be released in Japan first, and while no U.S. date has been set, it will be available at shows.

" Shangri-Las singer Mary Weiss will speak at the Rock and Roll Hall of Fame and Museum (1 Key Plaza) at 7 p.m. Wednesday, April 18, as part of the Hall's excellent ongoing lecture series, From Songwriters to Soundmen: The People Behind the Hits. Future speakers will include Warped Tour founder Kevin Lyman (Monday, May 16) and Helmet mainman Page Hamilton (Wednesday, June 20).