Peter Bogdanovich wasn't dead. He was just acting like it. 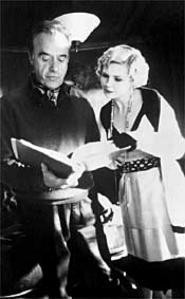 Richard Foreman
Nine lives, or close to it: Peter Bogdanovich directs Kirsten Dunst on the set of The Cat's Meow.
Peter Bogdanovich, maybe the last man alive who wears a neckerchief without irony, holds a copy of a newspaper article in which his old friend Larry McMurtry is saying nice, or not nice, things about him--Bogdanovich can't tell which. "He's kind of risen from the dead," McMurtry was quoted as saying of the director who turned the author's elegaic novel The Last Picture Show into a beloved black-and-white film in 1970, "and he wants to stay alive." The quote appeared in a piece about how, at long last, The Last Picture Show had screened in Archer City, Texas, where the movie was made amid much chaos and distraction. Attending the screening and celebration were stars Jeff Bridges and Cloris Leachman, who won the Best Supporting Actress Oscar in 1971 for her role as Ruth Popper, Timothy Bottoms' dispirited lover. Though he was not far away--only 138 miles, to be exact, resting up in a Dallas hotel--Bogdanovich declined to attend. Stormy weather and exhausting hours spent traveling to promote his new film, The Cat's Meow, kept him away.

He's scanning the story, which was published just hours ago, and stumbles across McMurtry's quote. "Back from the dead," the 62-year-old filmmaker repeats to himself, a small grin spreading across his soft, almost bulbous face. He sits at the end of a long conference table in a sleek Dallas office building; beside him rests his cell phone and a bottle of water in a tote bag he takes everywhere. He's asked what he thinks McMurtry meant--though it's probably a stupid question. A maker of three straight hits in the early '70s (The Last Picture Show, What's Up, Doc? and Paper Moon) and lover of beautiful women in their early 20s (Cybill Shepherd and Dorothy Stratten), he long ago fell from crowned prince to court jester. He made flop (At Long Last Love, a musical even he derides now) after flop (Nickelodeon) after flop (They All Laughed), became embroiled in a litany of scandals and lawsuits, went bankrupt and found himself directing made-for-TV movies--a long, long fall for the man who once imagined himself the second coming of Orson Welles, his friend and mentor. His life drove him nervous, landing him in a sanitarium at the end of the 1980s.

Anyone with any sense of film history knows what McMurtry means: Peter Bogdanovich, golden boy until he became whipping boy, is no longer on the shit list. He's not back on the A-list, either, but closer today than he's been in decades.

"Well, it's a typical McMurtry remark," Bogdanovich says, his smooth, deep voice filling the room like smoke. "I think what he meant was that I..." He pauses. "There are two things he could've meant. Probably what he meant was that I've got a picture that's coming out that's got good reviews. And I'm promoting it." Another pause. "Frank Sinatra said that to me."

"When Mask was being released"--this would have been in 1985, long after Bogdanovich had gone from being revered to reviled--"Sinatra said, 'He comes back from the dead.' I keep rising, sort of like Lazarus, every few years." He doesn't laugh, doesn't chuckle or even grin.

In recent weeks, Bogdanovich has been schlepping up and down the PR trail dropping clues, hoping to lure audiences into The Cat's Meow with scrumptious crumbs loaded with the empty calories of idle gossip: enormous success and rampant failure, horrific tragedy and overwhelming joy. It's almost as if he's using his past to sell his future--in this case, a rather affable bit of nostalgia for the black-and-white days of Charlie Chaplin, William Randolph Hearst, Thomas Ince and Louella Parsons, who gather aboard Hearst's yacht in 1924 for a weekend of mirth and murder. His life has always been an open book--quite literally, as in 1984 he penned a tome about the 1980 sodomy and murder of Stratten by her estranged husband--and he's never shied away from talking about the bad yesterdays. That's to be expected from a man who spent many years begging other filmmakers--among them Welles, Howard Hawks, John Ford, Alfred Hitchcock, Leo McCarey and other legends captured in his indispensable 1997 book Who the Devil Made It--for their tall tales of wow and woe.

But you can't get without giving something in return, and he gracefully hands over anecdote after anecdote loaded with heartbreak. That they don't smack of revelation is only because he's told so many of these stories before: his affair with Shepherd on the set of Last Picture Show, the impact of Stratten's death, the day he met Welles and on and on and on. He has nothing to hide; but how could he when, for so many years, he had nothing to show for years in would-be exile?

Twenty years ago, he all but gave up on the movies; certainly, they were happy to abandon him. When he was almost 13, in 1952, he began keeping record of every movie he saw; he'd take a note card, jot down the credits, pen a small review and keep it somewhere safe. He did that for 18 years, till he started shooting The Last Picture Show; when he was finished, he had accrued more than 5,000 cards. In the 1980s, he stopped going to movies almost entirely. The filmmaker wasn't even a fan any longer. He lost both loves of his life: first was Stratten, then came cinema.

"I think I lost my love for movies after Dorothy was murdered," he says. "Definitely. There was a period of probably more than a decade where I wasn't really interested. And it was sad. I didn't see them or make them. Well, I'd see them occasionally, but there are a lot of films made in the '80s that I never saw, including E.T. I just didn't give a shit. It came out in '82, and I was in the midst of writing that book [The Killing of the Unicorn: Dorothy Stratten 1960-1980]. I lost interest. Also, my therapist said, toward the end of the '80s, that I associated her murder with directing, for some reason, because it happened right after a movie, and I felt that if I'd been more vigilant about life, as opposed to being so concerned about the movie, that maybe I would've noticed something was wrong.

"So I blamed myself for what happened. My therapist said I exiled the person who directs in me--I exiled that person to a desert island--and that I have to bring him back before I can get interested again. I did get interested again. There are films that I'd like to make. I saw somewhere that Robert Graves, whenever he wrote a poem, he asked himself, 'Is this poem necessary?' And that's a wonderful question. And so I try to ask the question, 'Is this film necessary?' Because there are so many unnecessary films."

And he has made some of them, by his own admission. In Peter Bogdanovich's Movie of the Week, his 1999 collection of reviews written for the weekly New York Observer, Bogdanovich throws himself under the bus. In his opening critique of An American in Paris, he admits that many filmmakers--"notoriously yours truly"--failed whenever making musicals. Of his reasons for damning himself and his movies, he shrugs, smiles and says, "Well, you know, everybody else is doing it, so I might as well. I try to be honest in these situations and try to have some awareness, and there's no point in kidding myself. I'm disappointed in certain films that I've made, and usually, you can't blame anybody but yourself." Rarely has a filmmaker of his legend--and, yes, there was a period when he was among the most celebrated directors in the New Hollywood--spent so much time apologizing for his work. It's as though he believes to sell his new movie he must first absolve himself of his old ones, with famous exceptions.

There are copious reasons Bogdanovich never became as famous, or infamous, as his beloved predecessors or peers, among them Martin Scorsese, Francis Ford Coppola and Robert Altman, but one can't just dismiss it all to scandal and audacity. Maybe it was because he never quite fit in anywhere: He was a child actor (in the '50s, he studied with Stella Adler) who became a critic (for, among other places, Esquire) who became a filmmaker and remained all three. Today, he's likely best known to some as Dr. Melfi's psychiatrist on The Sopranos--the therapist's therapist.

"It did all overlap, and one thing helped the other," he says. "The writing was, besides being a way of earning a living, it was also a way of learning about the craft of filmmaking from people who had done it...Today, a tidal wave of history has taken us to a point where nobody has heard of any movie made before 1990. Every time you see a movie, you say, 'You know, this movie's been done better, and I wonder if they've ever seen it.' You feel that the director or the writer is straining to invent the wheel. And the wheel is already invented. I don't know what to say about it, but I'm still plugging away, trying to get people to look at some old films. I've got a new work coming out called Who the Hell's in It about a bunch of actors. I'm still yelling about the older films. It's a treasure, it's an absolute buried treasure, and now more older films are available than ever before and less people know about them."

Which leads to perhaps the truest explanation for his slide into the footnotes. His best films recalled his icons, the guys he's still screaming about: Howard Hawks, John Ford, Preston Sturges and other gray icons of the bygone studio system. Scorsese once said of Bogdanovich, "He's the last classical filmmaker around," and by his own admission, that always put him in a "weird spot." Bogdanovich, in the early '70s, was the last of the old-time filmmakers come too late to the party, a newborn thrown right into the casket.

"I've never been comfortable with my own generation," he says. "Scorsese's comment is nice. At least, it sounds nice. But having gotten older, everything has more reverberations on a lot of different levels. I think the goal is still the same: to affect the viewer in some way that's hopefully constructive. I think that's still the same. But my pleasures are not as innocent as they were."